Joan Naviyuk Kane, A Few Lines in the Manifest


Call me Naviyuk. Through Melville, and perhaps only parallel to the current from Kristeva, I bring myself questions about the materiality of language: how do the histories and textures of words and syntax provoke you? What is your debt to the multiplicities of basically everything, but particularly: Shakespeare’s sexual violence and the myth(s) of self-determination, of the indigenous American as the vanishing savage? How did you get on this island, and how do you get off? We do our best to remind ourselves that historiography is a tool of empire, that, as with Ishmael, my nation’s interests are contrary to your nation’s interests, that “[…] the Esquimeaux are not so fastidious.”

Let us now labor over Victorianism.

Inupiaq American poet Joan Naviyuk Kane’s latest is the stunning A Few Lines in the Manifest (Philadelphia PI: Albion Books, 2018), produced by Brian Teare’s Albion Books in an edition of one hundred and fifty copies [see further of my reviews of Albion titles here, here, here, here and here, as well as publisher Brian Teare’s “12 or 20 (small press) questions” interview here]. Compiled as four lyric essays—“NIĠIPIAQTAVIIN? / DO YOU EAT REAL FOOD?,” “I AM CHOPPING IVORY OR BONE,” “THE BROKEN LINE” and “CITATION IN THE WAKE OF MELVILLE”—Kane writes on history, culture, displacement and poetry in a remarkable quartet of pieces that ripple outward from the core of her own centre as Inupiaq, and her mother’s traditional home of King Island, Alaska. As she discusses, King Island is an island in the Bering Sea abandoned in the mid-1900s due to forced relocation via the Bureau of Indian Affairs.

I once spoke with a Danish journalist about the relationship between language and survival, how my sons know well the Inupiaq words for airplane (tinmuzun), pencil (aglaun), tomorrow (ublaakun), but how they did not know many words for traditional subsistence food or its harvest, because our lives did not include hunting. Their father is not Inupiaq. He cannot legally harvest a single seal (niqsaq), bearded seal (ugruk), or walrus (aiviq). (“NIĠIPIAQTAVIIN? / DO YOU EAT REAL FOOD?”) 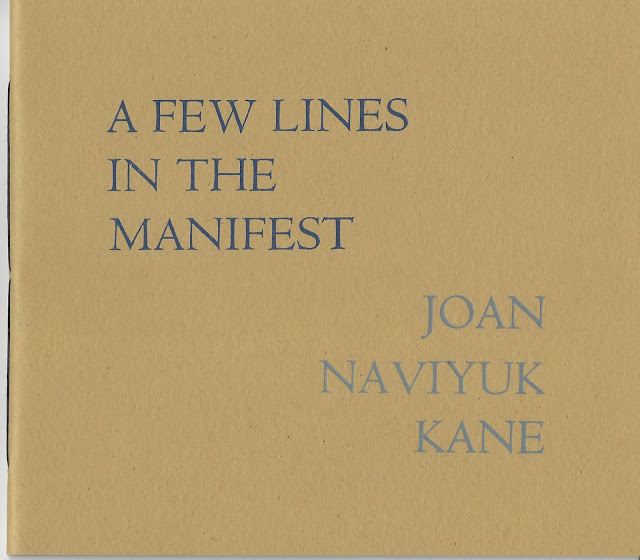 The author of the poetry titles The Cormorant Hunter’s Wife (2009), Hyperboreal (2013), The Straits (2015), Milk Black Carbon (2017) and the forthcoming chapbook Sublingual (Finishing Line Press, November, 2018), Kane displays such an ease in her prose, able to twist and turn complexities across a rather large canvas, one I’m hoping might eventually be larger than the four pieces collected here. Through four interconnected essays, this collection very much explores the relationships between, as she suggests, culture, language and survival, and is an important conversation during an era that attempts to (or wishes to attempt to) engage with any kind of reconciliation. The third essay here, for example, works through a variety of histories of her mother’s people, as well as Kane’s own exploration of King Island in 2014, making her difficult way to an island not easy to reach from the mainland. As she writes:

I am not interested in perpetuating notions of indigenous people as endangered or imperiled or extinct. I suppose that I look to language, and the role of the lyric—the (unidentified) fragment—as a place of refuge and possibility, a generative space. Not a space of loss, but contingence. Some of this, I remain convinced, is encoded at the core of my very being. As a real person (Inu means “person”, -piaq means “real”), and a mother of young children. As a poet whose concerns are not so much about performativity or portrayal, but about the problem of place and the emphatically American preoccupation with it. That is to say, for me, poetry is outside of and necessarily informed by history—my family’s personal history and the significance of place in that history—and the imagination, as I imagine poems exempt from history in a way that still acknowledges its debt to it and understands its place and function in relation to it. (“THE BROKEN LINE”)