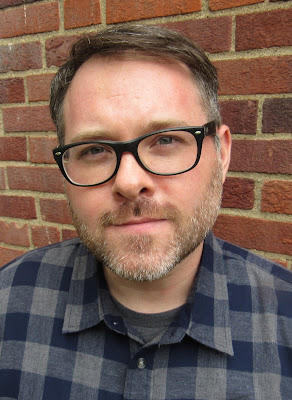 Dan Brady is the author of the poetry collection Strange Children (Publishing Genius, 2018), and two chapbooks, Cabin Fever / Fossil Record (Flying Guillotine Press) and Leroy Sequences (Horse Less Press). He is the poetry editor of Barrelhouse and lives in Arlington, Virginia with his wife and two kids. Learn more at danbrady.org.


1 - How did your first book or chapbook change your life? How does your most recent work compare to your previous? How does it feel different?
Strange Children is my first full-length book and, so far at least, it’s changed my life in that I’ve found that people really read poetry and they will send you nice emails and post pictures of themselves with your book without any prompting at all. And that’s really nice and exciting. I’ve seen it happen for lots of other people as an editor and publisher and general poetry community member, but it’s really amazing when it happens for you. It’s sort of a reverse-imposter syndrome, like, “wow, this all really works!” I shouted into the void and the void embraced me.
2 - How did you come to poetry first, as opposed to, say, fiction or non-fiction?
I was a late reader. I never really liked books as a young kid, but by middle school I was all-in on comics. I even worked in a comics shop from about the ages of 13 to 19. In high school I discovered poetry. My English teacher sophomore year asked our class what we thought of poetry and a classmate responded that it was all about “love and flowers and stuff.” The teacher then had us read “Dolce et Decorum Est” by Wilfred Owen, which features the gruesome effects of mustard gas in WWI. Not quite love and flowers. After that I was hooked. I think my love of poetry is related to my love of comics. Both marry image and words and emphasize movement on the page. They show grace and violence all at once. I guess that’s what I like.

3 - How long does it take to start any particular writing project? Does your writing initially come quickly, or is it a slow process? Do first drafts appear looking close to their final shape, or does your work come out of copious notes?
I’m very slow. I usually jot down notes towards a line or an idea and let it sit for weeks or months. Then I go back into it and see where it takes me when I try to expand it. That first draft usually has 90% of the final poem, but then it’s months more tinkering to get the last 10%.


4 - Where does a poem usually begin for you? Are you an author of short pieces that end up combining into a larger project, or are you working on a "book" from the very beginning?
Poems usually start small, just as one-off pieces by themselves. Sometimes they’ll cluster around a theme, an idea, or a recurring image and then I think about mashing them all together. I’ve only worked on one project that I thought of as a book from the start and that went nowhere.


5 - Are public readings part of or counter to your creative process? Are you the sort of writer who enjoys doing readings?
I love going to readings. I love meeting other writers who are part of the local community. It’s a small world and I like to know everyone and what they’re working on and how I can support it. Getting out is part of my creative process in that hearing other people’s work often inspires me to write more. I don’t like or dislike reading my own work in public. I hope people enjoy it or are moved by the poems, but the act of performing isn’t something that gets me going.


6 - Do you have any theoretical concerns behind your writing? What kinds of questions are you trying to answer with your work? What do you even think the current questions are?
I’m interested in structure, which is not the same as form. I like to think about the scaffolding upon which a poem is built. Beyond that, I think the questions I’m trying to answer are the same as everyone else: How should one live? What does this all mean? How can we love each other more?


7 – What do you see the current role of the writer being in larger culture? Does s/he even have one? What do you think the role of the writer should be?
The role of the writer, to me, remains the same as it’s always been, which is to observe and report, to hold up the mirror to society, and to be a witness the world as it is. Even when we’re just playing around, we’re still doing those things. No matter what readers will look for meaning. Meaning is perhaps a bit overrated, but even when meaning isn’t obvious, mood is always there and I think there’s meaning in the mood. Maybe that’s it. The writer’s role is to create moods for the audience to try on and cast off to see if they feel right or not.


8 - Do you find the process of working with an outside editor difficult or essential (or both)?
Every editor I’ve worked with has made my work stronger and more focused. I think I get to a point where I need to hand what I’ve made to someone else and say, “I’ve made this thing that I think is pretty good. Here. Push on it for a little while.” Then we see what happens. Ultimately, given all the feedback, the writer has to decide what’s right for the work, but I’ve never found that part of it difficult.


My first chapbook, Cabin Fever/Fossil Record (Flying Guillotine, 2014) changed the way I viewed the editing process. Tony Mancus and Sommer Browning both had really insightful edits and pushed me to explore some new pathways that I wouldn’t have gone down otherwise. When it came to publishing Strange Children, I knew I wanted a similar poet-editor relationship. Adam Robinson asked great questions of the work and helped me turn the manuscript into something more coherent that better reflected what the poems, up until that point, were only trying to accomplish.
9 - What is the best piece of advice you've heard (not necessarily given to you directly)?
If offered to you, never refuse a mint.


10 - What kind of writing routine do you tend to keep, or do you even have one? How does a typical day (for you) begin?
I don’t really have one. My day begins around 6:15 when I wake up and make breakfast for my family. I’m an at-home dad so from there on out it’s mostly taking care of little people, making dinner, doing laundry, etc. I keep notebooks everywhere and write little scraps of things all the time. Then, when the opportunity presents itself, I sit down with those scraps and try to make something whole.


11 - When your writing gets stalled, where do you turn or return for (for lack of a better word) inspiration?
I go to a museum. I love the visual arts and find the methods of visual artists particularly inspiring. I also retreat back into poetry and re-read my favorites. I keep Jack Gilbert’s Collected Poems on my nightstand for just that reason. When I have nothing else to read, I dive back into that.

12 - What fragrance reminds you of home?
Stargazer lilies.


13 - David W. McFadden once said that books come from books, but are there any other forms that influence your work, whether nature, music, science or visual art?
Visual art is a huge inspiration to me. There’s a weird little sound poem in the book called “Plexus,” which takes its title and inspiration from the textile work of Gabrielle Dawe. It also ends with lines from Disney’s Robin Hood.

14 - What other writers or writings are important for your work, or simply your life outside of your work?
There are a handful of writers I feel can speak directly into my brain: Justin Marks, Ada Limón, Matthew Rohrer, Farid Matuk. They are important to me. For my writing, I often lean on William Carlos Williams.


15 - What would you like to do that you haven't yet done?
I want to figure out better solutions for funding literary projects. Before I stayed home with the kids, I worked in literary nonprofits and then at the National Endowment for the Arts and in philanthropic organizations. The large, established presses and magazines are well-supported by funders, but there is very little money available for new and emerging magazines and presses. We need to create sustainable models that allow for growth and scale. Federal funding the US is limited and leans toward the larger, established groups. State arts agencies are all strapped, and many don’t offer support for non-profit publishing.


Perhaps there’s a way to encourage more private foundations to engage with small presses and magazines that are publishing the most important, most exciting, transformative writing. Perhaps there’s a way to better organize the crowd-funding of literary projects so that we’ve viewing things on a longer time horizon, not just issue by issue, book by book. That’s the problem I want to solve.
Barrelhouse’s Amplifier Award is part of that solution. We’ve done well enough that we can now directly support other literary organizations we love. Last year, we awarded the cash to Girls Write Pittsburgh and for 2018 we just announced the award will go to FIYAH, a literary magazine of black speculative fiction.
16 - If you could pick any other occupation to attempt, what would it be? Or, alternately, what do you think you would have ended up doing had you not been a writer?
This makes absolutely no sense because I have zero experience in either, but I’ve always thought I’d be a natural at two things: 1) snowboarding and 2) server administration.

17 - What made you write, as opposed to doing something else?
My childhood friend John Nixon and I were both into all the same things—art, music, etc.—and were low-key competitive about it. He became an amazing guitar player and I just couldn’t keep up. I loved to draw through most of college but eventually decided I needed focus on writing. Poetry seemed like something special all my own. I still love to draw though, mostly with my kids.


19 - What are you currently working on?
I have another manuscript of poems called “Subtexts” that explores the modified self-erasure method that appears in my chapbooks. It’s more experimental than Strange Children, but still accessible. That’s pretty much done. Other than that, I’ve been writing a lot of poems about time and I think there’s something more there.