Frank O’Hara used to say he couldn’t enjoy a
blade of grass unless there was a subway handy;
David W. McFadden, “New York,” The Art of Darkness (1984) 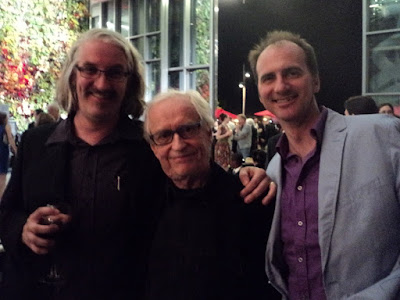 [photo by Christine McNair: myself and David O’Meara with McFadden after his 2013 Griffin Prize win]
Sad news out of Toronto, hearing that David W. McFadden has died, after a stay in hospice care.
When I was still in my mid-twenties, floundering with poems and poetry, David McFadden was one of the first older writers I met whose work and personality resonated. And from another city, even. Uncle Dave, we called him. I called him. Well before I met Uncle George.
His 1984 title, The Art of Darkness, I carried around like a bible for some time. I liked his humour, and plain way of speaking. We both liked to read Frank O’Hara, something Ken Norris might have first pointed out to me.
My first trip to involve any significant downtown Toronto time was in 1995, a downtown day-trip to the bookstores. Wandering, I ended up at This Aint the Rosedale Library Bookstore on Church, where I  recognized him, skimming the bookshelves (I had mailed him a packet of above/ground press items only a few weeks prior, but we hadn’t yet met). He recognized, I suspect, some of the items I was attempting to leave in the store on consignment.
McFadden walked over and smiled. So, he said, are you going to call David McFadden while you're in town?
I thought that was you, I said.
We ended up next door, at the Unicorn Family Restaurant, and talked about things we knew, and things we didn’t know. He flirted with a dance teacher at the next table, and we made fun of the waiter, who had an “I HEART N Y” apron, with a tomato where the heart should be.
McFadden told me to order the pancakes, so we did.
After he had finished eating, I said: Those pancakes were awful.
I know, he smiled. Almost gleefully.
We kept in touch, on and off, for years. Whenever I would end up at or near that restaurant, I would leave him a phone message, and he almost always appeared within twenty minutes or so. He recommended books for me to read, and even allowed me to produce three chapbooks through above/ground press.
I once heard him heckle a Stuart Ross/Gary Barwin reading at The Idler Pub Reading Series. I hosted his first Ottawa reading, at The TREE Reading Series, on September 4, 1996. I was there when he read the entirety of The Ovi Yogas (1971) publicly, for the first time (prompted by jwcurry) in a midnight hospitality suite to less than a dozen of us, during The Ottawa International Writers Festival in 2004. It was glorious. He had a fine mind, and a casualness that belied his quick wit.
I enjoyed that sparkle in his eye, even as he told the worst joke imaginable.
I shall miss his odd humour, his generosity and his grace.