Hard to believe another fair has come and gone so quickly (and this fall will mark the fair’s twenty-fourth anniversary)! But it was a good one: here are a couple of the items I managed to pick up throughout the day. 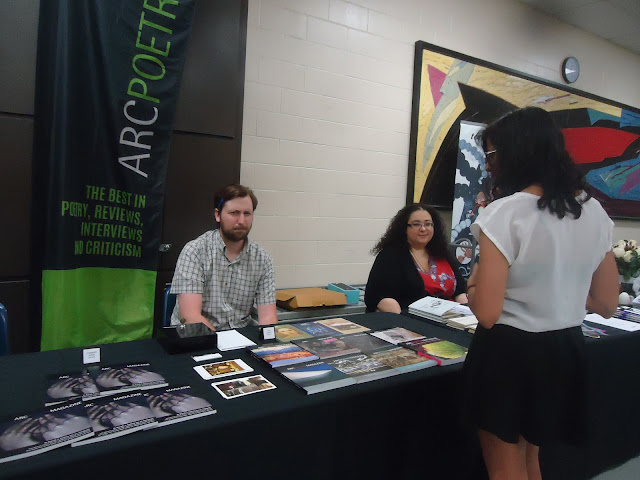 Ottawa ON: It’s good to see Marilyn Irwin continuing to produce items through her shreeking violet press, and her latest is the chapbook Eleven Elleve Alive : poems, “Original poems & translations by Stuart Ross & Dag T. Straumsvåg & Hugh Thomas,” and, at fifty-six pages, sits as her heftiest production yet. The publication stems from Thomas’ ongoing work translating poems from Swedish, a language he doesn’t understand, deliberately not looking up words, but taking what he sees and composing an English-language poem in response (for example, see his chapbook Six Swedish Poets from above/ground press, 2015). This chapbook, I suspect, came from an exchange between Thomas and Ross during a pre-fair reading, about Hugh wishing to translate some of Ross’ poems into English, and the results are quite striking. So the book itself contains twelve poems: an original poem by Stuart Ross, a translation of that poem into Nynorsk by poet and editor Dag T. Straumsvåg, and then Thomas’ “translation” of Straumsvåg’s translation back into English. For example:

The bright green apple sails over the white fence.
The small running shoe lies in an overgrown field.
The man rappels down the side of a sidescraper.
The happy mice burrow through the rotting garbage.
The Latvian hairdresser leaps with joy.
Malarial flies float dead in the gutter.
A paperboy takes a bow.

A green light shines over the planet.
A yoga studio starts to grow in the vacant lot.
A man remembers a disease and a skyscraper.
The happy muses bury themselves in the road map.
The freshly washed hairdresser flaps in the breeze.
Maria flies in the open window.

Both Ross and Thomas’ works have long been known for their engagements with surrealism and sense of play, so the interplay between the two is entertaining to see, especially with the added element of Dag T. Straumsvåg. 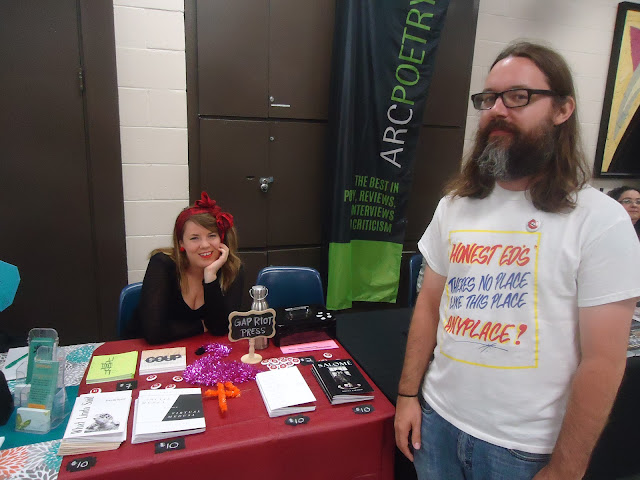 Ottawa ON: Cameron Anstee’s Apt.9 Press has been known for some time for producing lovely handmade books and, given he’s been producing less the past year or two, it was good to see a new item of his at the fair this year: Peterborough writer, publisher and artist Elisha May Rubacha’s chapbook, Too Much Nothing (2018). Rubacha, along with her partner, Justin Million, run readings in Peterborough, Ontario, as well as co-publish the small press, bird, buried press.

some smoked right up to the launch pad

I’m impressed by the amount of activity Rubacha manages to contain within these small, deceptively straightforward poems, writing short observational musings on space, childhood and Roberta Bondar, and her poems close well before they end, leaving the rest of each piece to sit in the thoughts of the reader for some time after. These are poems that might be small in size, but contain multitudes, composed as quiet, thoughtful pieces I would like to see more of. I am hoping there might be more.

little girls bring their parents
to the opening of Dr. Bondar’s photography exhibit

she autographs their drawings
of rocket ships and planets

while their brothers wait impatiently to leave