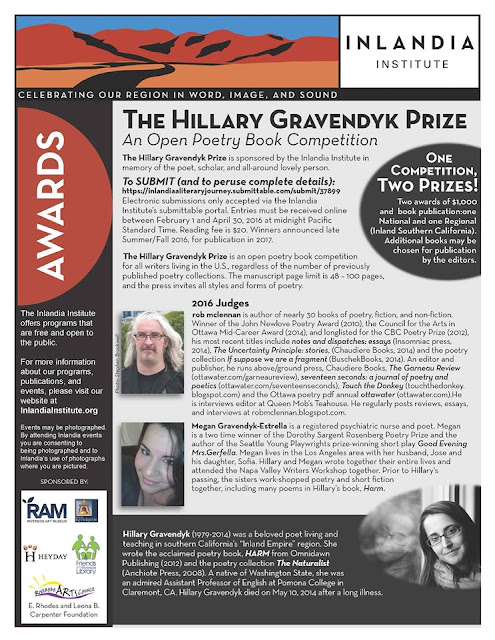 Announcing the 2016 Hillary Gravendyk Prize, Sponsored by the Inlandia Institute

One National and one Regional Winner will each be awarded $1000 and book publication, and additional books may be chosen for publication by the editors.

The Hillary Gravendyk Prize is an open poetry book competition for all [American resident] writers regardless of the number of previously published poetry collections. The manuscript page limit is 48 - 100 pages, and the press invites all styles and forms of poetry. Only electronic submissions accepted via Inlandia’s Submittable portal. Entries must be received online by April 30, 2016 at midnight Pacific Standard Time. Reading fee is $20. The winners will be announced late Summer/Fall 2016, for publication in 2017.

HILLARY GRAVENDYK (1979-2014) was a beloved poet living and teaching in Southern California’s “Inland Empire” region. She wrote the acclaimed poetry book, HARM from Omnidawn Publishing (2012) and the poetry collection The Naturalist (Anchiote Press, 2008). A native of Washington State, she was an admired Assistant Professor of English at Pomona College in Claremont, CA. Her poetry has appeared widely in journals such as American Letters & Commentary, The Bellingham Review, The Colorado Review, The Eleventh Muse, Fourteen Hills, MARY, 1913: A Journal of Forms, Octopus Magazine, Tarpaulin Sky and Sugar House Review. She was awarded a 2015 Pushcart Prize for her poem "Your Ghost," which appeared in the Pushcart Prize Anthology. She leaves behind many devoted colleagues, friends, family and beautiful poems. Hillary Gravendyk passed away on May 10, 2014 after a long illness. This contest has been established in her memory.

Born in Ottawa, Canada’s glorious capital city, rob mclennan [photo credit: Stephen Brockwell] currently lives in Ottawa, where he has now lived for more than half his life. The author of nearly thirty trade books of poetry, fiction and non-fiction, he won the John Newlove Poetry Award in 2010, the Council for the Arts in Ottawa Mid-Career Award in 2014, and was longlisted for the CBC Poetry Prize in 2012. His most recent titles include notes and dispatches: essays (Insomniac press, 2014), The Uncertainty Principle: stories,(Chaudiere Books, 2014) and the poetry collection If suppose we are a fragment (BuschekBooks, 2014). An editor and publisher, he runs above/ground press, Chaudiere Books, The Garneau Review, seventeen seconds: a journal of poetry and poetics, Touch the Donkey and the Ottawa poetry pdf annual ottawater. In 2015, he became Interviews Editor over at Queen Mob’s Teahouse. He spent the 2007-8 academic year in Edmonton as writer-in-residence at the University of Alberta, and regularly posts reviews, essays, interviews and other notices at robmclennan.blogspot.com

Megan Gravendyk-Estrella is a Registered Psychiatric Nurse and Poet. Megan is a two time winner of the Dorothy Sargent Rosenberg Poetry Prize and the author of the Seattle Young Playwrights prize winning short play "Good Evening Mrs.Gerfella". Megan lives in the Los Angeles area with her husband, Jose and his daughter, Sofia. Hillary and Megan wrote together their entire lives and most recently attended the Napa Valley Writers Workshop. Prior to Hillary's passing, the sister's work-shopped poetry and short fiction together, including many poems in Hillary's book, Harm.

The details:
One contest, two prizes, each award is granted publication and $1000: All entrants will be considered for the National Prize, and entrants who currently reside in Inland Southern California, the “Inland Empire,” will also be considered for the Regional Prize (Riverside and San Bernardino Counties, and any non-coastal Southern California area, from Death Valley in the northernmost region to Anza-Borrego Desert State Park in the southernmost). If you believe you reside in an area that falls within the I.E., please select the “Yes, I reside in the I.E.” checkbox on the Submittable form, or if you’re not sure, please contact the Inlandia Institute at Inlandia@InlandiaInstitute.org.) In addition, the editors may select one or more additional books for publication.

Eligibility: Any resident of the United States of America or its territories may enter the contest, with the exception of colleagues, students, and close friends or family of the judge(s). Additionally, anyone who currently serves or has served in the past two years on any Inlandia Institute committee, its Advisory Council, its Board of Directors, or is a close family member of one of the above, is not eligible.

Manuscript Requirements: Please submit 48-100 pages of poetry through our Submittable portal as a .doc, .docx, or .pdf. ***Submissions will be read blind, so do not include any contact information on the manuscript itself.*** Do not include a cover page, and do not attach an acknowledgements page. No revisions to the manuscript are allowed while the contest is running; however, if your manuscript is selected for publication, revisions may be submitted at that time. Please use a standard 11 or 12 point font. If there is a significant amount of non-standard formatting, please submit as a PDF to ensure formatting remains intact. Individual poems may have been published in journals, anthologies, chapbooks, etc., but the collection as a whole must be unpublished.

Submission fee: $20 per manuscript. Multiple submissions accepted but a separate entry fee is required for each manuscript submitted. Simultaneous submissions also accepted. If accepted elsewhere, please formally withdraw your manuscript from consideration via the Submittable portal.

Each winner will receive $1000, 20 copies of their book, and a standard book contract.

The manuscripts will be screened by MFA students from University of California Riverside and California State University San Bernardino.

The Inlandia Institute is a literary nonprofit and publishing house based in Inland Southern California dedicated to celebrating the region in word, image, and sound. In 2014, Vital Signs, a collection of poetry and photographs by Juan Delgado and Thomas McGovern, received an American Book Award from the Before Columbus Foundation. In 2015, the Inaugural Hillary Gravendyk Prizes were awarded to Kenji Liu for Map of an Onion (National) and Angela Penaredondo (Regional).