Toward. Some. Air. eds. Fred Wah and Amy De’Ath

The positions articulated in this anthology are vastly different, crossing generational, geographical, and theoretical borders, and in this sense we are aiming to encourage dialogue by proximity but also to suggest a looking-outwards; not so much towards other individual poets but towards other poetics and ways of being in the world. In this spirit some of the pieces included advocate different ways of listening. Kateri Akiwenzie-Damm and Christine Stewart emphasize the importance of listening for a politics of decolonization in the settler-colonial state of Canada; Maria Damon, speaking of her position as a critic, modestly characterizes herself as the “cheer-leader,” the “friend of poets,” the “poetry-enabler”; Sean Bonney and Stephen Collis discuss the difficulties of listening to the cacophony of voices present in a collective, and the dangers of privileging the poet-subject who imagines s/he might speak for, rather than with, the otherwise excluded subject who is wrongly perceived as “voiceless.” For many of the poets in this book, listening is a political practice that moves away from the individuating compulsions of singular authorship and towards modes of collectivity, perhaps to imagine what a collective subjectivity might mean. For all its difference, the work collected here is also testament to a widespread interest in the relation between poetry and social change, or between poetry and revolution, even as the latter may involve an assertion that poetry cannot do the same work as gathering of bodies at a protest or a riot. (Amy De’Ath, “Foreword”) 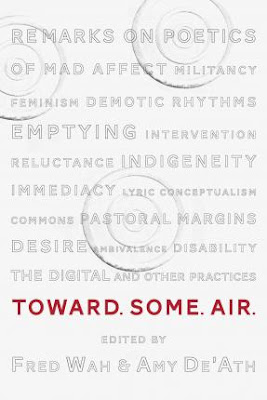 Honestly I don’t really like to write about prose so much because, in a way that seems true for me about prose and not so much about poetry, the practice of prose is both theory and practice. It’s one body. I mean discourse gives poets an opportunity to write prose and I think that is a pleasure in itself but prose writers, and even ones like myself who like to call themselves fiction writers or non-fiction writers and “poet,” too, depending on the mood, I think, would rather just do it and have it contain all its marvels, including thought about itself. There’s nothing about fiction or non-fiction that can’t contain thinking about itself and extrapolating about that. It’s like dropping your pen and noticing the room and then sitting up and keeping going. It’s like getting up to make tea or shitting or something like that. Thinking about the practice and the practice itself are part of the same territory in fiction so of course when you asked me to do this I thought oh fuck but I am working on a book. (Eileen Myles, from “Reluctance”)

An important feature of the anthology is in understanding how much of the conversations explored here (some of which have been building for years), as well as a number of contributors, aren’t often collected for a book such as this, especially one that exists across more than a couple national borders. As well, many of these conversations become required reading in part for their prior absence in the larger sphere, having long existed on the fringes of literary discourse, or simply too new to have been properly explored, whether conversations concerning new media, post-colonial attitudes and Idle No More, disability poetics, archival projects and post-lyric sensibilities, and any number of further conversations involving gender, race, resistance, reconciliation, violence and attention. At three hundred and forty-eight pages, this is a hefty volume, and one that anyone could and should spend a great deal of time working to absorb. What makes Toward. Some. Air. such an important anthology is in the wide range of discourses it contains, all of which have long been existing just under the surface of literary conversation; with increasing volume and intensity, these are the conversations that will be existing in the ways in which we write, read and comprehend ourselves. If you want to know what is happening, in writing and the larger discourse, this is a place to begin. As Larissa Lai writes to open her “An Ontology and Practice for Incomplete Futures”:

If the practice is to be meaningful, it must engage language, body, history, memory, the present, the unconscious, imagination, ethics, and relation in a drive towards the future.

There are also a number of more direct conversations in the collection, including an essay on the work of the late poet Peter Culley by Lisa Robertson (“Listening in Culley’s work is an economy that, while seemingly as at ease with its demotic setting as it is with a profound literariness, subtly undercuts itself with a sonically installed irony.”), the poet and critic Dale Smith interviewing his long-time partner, co-editor and co-publisher, the poet Hoa Nguyen, Keith Tuma on the work of British poet Tom Raworth, and Christine Stewart’s ongoing exploration of Edmonton’s Mill Street Bridge, specifically “Treaty Six”:

The underbridge at Mill Creek is an exposed edge, scarred by the extraction of resources, development, and the displacement of people. Its dynamics and devastations, its sleepers, reveal the Treaty violations and the government’s continued bio-control of Indigenous peoples and their land – all that remains at the heart of Edmonton, and of Canada. There are hundreds of underbridges in this country – colonized spaces, debris fields, wounded, appropriated earth, displaced Indigenous communites.
How to heal this wound, how to honour the treaties, the obligations of sharing Indigenous land? How to be here? As a non-Indigenous person embedded and implicated in white settler ideology, who is that I that I am? What forces have formed me, my sense of land entitlement, and this gaze? That I, here, settled and settling, unsettled and unsettling, born in a country that is a collective and purposeful creation of forgetting, oblivescent, obliterating; not a place of limitless potential, but a nation that demands a baseline of deprivation and suffering. There is always someone sleeping under the bridge there is always an Attawapiskat. There is no post-colonial, but there is capitalism, and these are these conditions that constitute Canada: land and resource theft, the enforced dislocation of communitites, genocidal administrative systems, and government-sanctioned amnesia.
Under the bridge at Mill Creek, composer Jacquie Leggatt and I listen, gathering rhythms and vibrations that are material and specific to the stream, to the ravine, to the river valley and to the river. Next to the huge cement piers, to the thin trees and the creek, under the bridge, noise envelops us. Wearing Jacquie’s earphones, holding the Sony recorder, we encounter layers of sound, emetings of lives; dog, jogger, stone, water, car, bird, two men (yelling from the bridge deck above). Noise swarms the listening body – from behind, from above, from below. The eyes close; the I shifts and is shaken. In its immediate proximity (surrounded) with the materiality of sound, the body encounters the permeability of its own matter. The ears can’t and won’t block the siren, the car alarm, booming truck, ragged breath, coughing body; each noise enters, moves through. The underbridge: kâhasinîskâk, place of stones, and stories, buffalo trail, a dense growth of trees and brush, remnants of a shanty town, holes from the coal mines, cow bones from the abattoir, inhabited coyote den, defunct railway: the resonant matter of this place.

Another highlight in a series of highlights is the conversation between British poet Sean Bonney and Vancouver poet Stephen Collis, “We Are An Other: Poetry, Commons, Subjectivity,” that includes:

Sean Bonney: I’ve always been interested in subjectivity, at first because certainly in the London avant-poetry scene, when I first showed up, lyric expression was a real no-no – the whole scene seemed to have very rigid rules. And anyway, dogmas against the lyric subject in poetry – from Olson on – always assume that we’re talking about a middle-class, usually male, usually white subject, as if the only people who could be interested in the “avant-garde” would be white posh men. It is easy to deny subjectivity when yours is the dominant. There’s no need to assert it because it permeates the entire atmosphere of social reality.