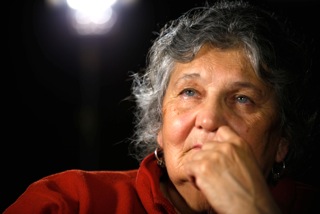 Maria Campbell is a writer, playwright, and teacher. She started her career in 1973 when she published her first book, Halfbreed. That book has become a literary classic and continues to be one of the most widely taught texts in Canadian literature. She has also published six other books, the most recent is, Stories of The Road Allowance People.

Maria Campbell’s first professional play, Flight, was the first all-Aboriginal theatre production in Canada. Flight brought modern dance, storytelling, and drama together with traditional Aboriginal practices. She went on to write and direct other plays among them Jessica, which received the Chalmers Award for Best New Canadian play and toured internationally. In 1984, she co-founded a film and video production company with her brother and daughter. With this company, she produced and directed seven documentaries and produced with CTV, Canada’s first weekly Aboriginal television series “My Partners, My People.”

She has received numerous awards, including the National Aboriginal Achievement Award, the Gabriel Dumont Order of Merit, the Saskatchewan Order of Merit. The Chalmers Award for best new play, and a national Dora Mavore Award for playwriting. She has been inducted into the Saskatchewan Theatre Hall of Fame and in 2004 she was awarded the Molson Prize by Canada Council for the Arts. She was made an Officer of the Order of Canada in 2008.

She has worked as a volunteer with women and children in crisis for over forty years and is co-founder of a halfway house for women in Edmonton. Maria’s home, until recently, was a safe house for women and youth.

She was writer-in-residence at the University of Alberta during the 1979-80 academic year.

A: Well first of all I was surprised to be asked as I didn’t believe I was a writer, at least not a writer like yourself or the other people who had served before me and after. As you said in your question, I had “only published a small handful of books over a decade.” One thinks of A Writer-in-Residence as someone with a good solid reputation as a writer and with a large body of work. I was none of those things. I was however the first Aboriginal Writer-in- Residence so I believed that was one of the reasons I was invited and it was in part, one of the reasons I accepted. I have said this before and will say it again, I have never really thought of myself as a writer, I am a community worker and writing is one of the many tools I have been given to do my work. I am very grateful for that gift as it has made it possible for me to speak to issues that I believed and still believe are important in this country. No one knew very much about Halfbreeds or the politically correct term Metis, until my first book. Halfbreed opened the doors I needed to talk about the dispossession of Aboriginal people and the violence perpetuated against them, especially against Aboriginal women and children. However, I was not a trained or skilled writer but I did know the power of storytelling and writing. I had great respect for it and continue to respect it. It is that power that has given me light and hope from my earliest life. I love books and I love writers. The residency also gave me a year to think about what I wanted to do, how I was going to do it and to start some new projects. It was the first time in my life I didn’t have to be ducking and dodging bill collectors or wondering how I was going to afford groceries. I had a year of miyo pimachihowin, which in my language means a good life, free of worry. I had never had that before. I thank the late Jack McClelland for publishing me and by that act opening the door to a different place. I also thank the University of Alberta for inviting me to be their first Aboriginal Writer-in-Residence. We can say what we want about universities but they are respected places of learning and by their invitation to me they acknowledged that what I had to say and what I had to offer was of some consequence. Thank you rob for giving me this opportunity to say that.

A: I began translating Stories of the Road Allowance People while I was in residence. This was very important work for me and would probably not have been done if I were not there. It gave me the time to reflect on how I wanted to translate the stories and how once they were translated, to present them. As I said earlier, people knew very little about Halfbreeds or Metis and for sure they knew nothing about Road Allowance People. How could I give that history without going outside the story. You know like let the people and their stories do that. It was a very difficult process, translation is hard work. it requires you to go deep deep inside yourself and forces you to think and re-think stuff you thought was okay. I guess I could say it was another stage in my own decolonization. I finished two stories while I was in residence but it was the beginning of the long journey of putting that book together.  It didn't get published until 1995. I was also beginning my work with Paul Thompson of Theatre Passe Muraille and the late Linda Griffiths. The outcome of that work was the play Jessica and later, The Book of Jessica. Yeah I would say my residency was a springboard for all that. Expand my repertoire? I don’t know. I’m not sure what that means, if it means it helped me to find new tools then yes it certainly did that.

A: I had a lovely office in Humanities that overlooked the river. I am certain I am not imagining that room because I remember being quite overwhelmed when I was alone and sitting at my desk for the first time looking out that window at the river. I was a writer at a university and I was expected to work with new and aspiring writers pretty heavy stuff. The person who stands out most for me was Mary Howse. She was an established poet and very good. She was one of my first visitors and I am sure she does not know how much she boasted my confidence by showing me her work and talking to me as a peer.  I don't know if I ever helped her but I do know she certainly helped me and I think of her often when I am sitting at the computer working. Students visited my office, some came with poems, short stories and I remember one coming in with a huge manuscript. I am sure it was at least 500 pages. I often wonder if she ever published it. I did read the whole thing and I found it interesting and parts of it really funny. I was invited to schools and spoke to many  elementary and high school students. I was also invited to community events to do readings and speak. One of the events was held at the Indian and Metis Friendship Centre. It was hosted by the elders who greeted me with a lot of love and many stories. They were so kind and generous in their support. I also facilitated writing workshops which I found intimidating until Margaret Lawrence gave me a typed list of instructions and the ring she said she wore when she wrote Stone Angel. I would hold the list of instructions high so everybody could see them, show them the brass ring I was wearing and tell them the story of Margaret’s gifts to me and to the workshop. People were inspired and the workshops were very successful. Margaret laughed when I told her what I was doing. She also gave me a copy of the single, Long Black Veil, I think the singer was Johnny Cash. It was her favorite song at the time and she had several versions recorded by different singers. I sent her a copy of Fustukian’s version. He was a local recording artist. She loved it and told me to use it at the next workshop. I did and everyone wrote tragic stories about love gone very wrong.  I have always been amazed and moved at how much people love hearing and sharing stories and how good they all are once they forget about the stereotypes they have of writers and writing.

A: I had lived in Edmonton for many years already when I was offered the residency. Three of my children were born in Alberta so for me it was home. The landscape around Edmonton is also very similar to my birth home in Saskatchewan and my first languages are Cree and Michif and Edmonton is the territory of the Cree/ Michif people. My family had travelled back and forth and lived on this land and landscape for centuries. I also come from and grew up with oral traditions. My nokoms, grandmothers, were storytellers as was my father so my territory and its life force were/are so imbedded I can’t imagine not ever writing from that place.

I don’t think I was influenced by the writing or writers but I was certainly inspired by the writing and the writers. I was also encouraged and supported by those I knew, among them W.O Mitchell and Rudy Wiebe who both had great respect for Indigenous storytelling. My sense of the literary community was its richness and excitement. I was fortunate to be in Edmonton when I was because it was an exciting place. Art, theatre, music, literature, film, it was all happening there at the time and with a Minister of Culture who loved and supported it.

Posted by rob mclennan at 8:31 AM
Labels: Maria Campbell, University of Alberta, writer-in-residence