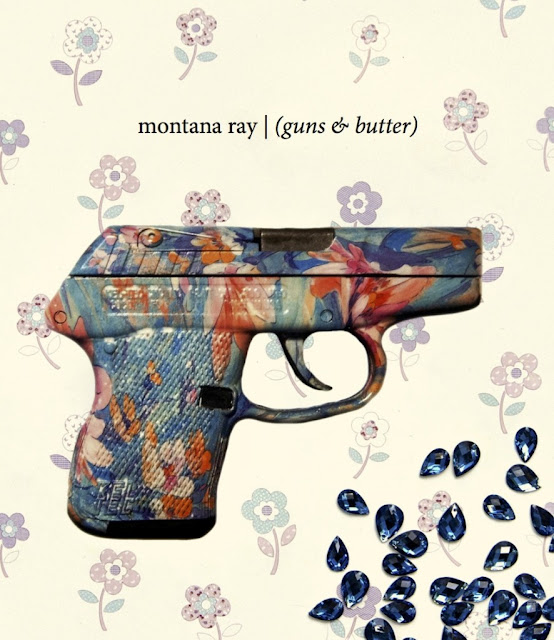 New York poet, translator and scholar Montana Ray’s striking first full-length poetry collection is (guns & butter) (Argos Books, 2015), a collection of concrete poems alternating between the shape of a gun with the occasional recipe. Composing poems in the familiar shapes of a handgun, Ray’s poems write out a culture of guns and gun violence, especially one that also connects sex and male violence to gun culture, composing a direct critique of what has become entirely too prevalent in North American culture. She also utilizes an intriguing use of parenthesis, holding together her short, accumulated phrases together, almost afraid that, without being held together, they might bleed and spill out across the page. As the poem “(when u broke the protective order)” begins: “(I became a walking statistic) (walking to & fro / the precinct) (telling anyone who’d listen) (my x moved to the nabe) (from 3 states / away) (to stare me down) [.]” In an interview conducted by Emily Brandt, posted in May 2015 at Weird Sister, Ray writes:

A lot of the language is sourced, so in the first poem I wrote for the book, the lines just cohered together in the shape of the gun. I’ve said this elsewhere, but the first poem I wrote in that shape is the first poem in the book. I’d received a text from my babysitter that said, “I might be late. A gun war is on.” Or a slightly less poetic version of that sentence. And I walked out to do my laundry with Ami; and some guy on the street was like, “You can touch it,” and then when I came home—I used to live in front of a tattoo parlor, I still live in the same place but the tattoo parlor has moved, and it’s now a fancy restaurant—one of the tattoo guys there, who I had a little crush on, he’d just gotten a new tattoo on his leg that was Billy the Kid’s gun. I was like, “Do you like guns?” And he said, “I like Billy the Kid.” So basically half of the language in the poem is sourced from one day’s interactions. I was also thinking about art, how you see guns on necklaces and on bags. The appropriation of that shape is done by designers of all sorts, and I wanted to do that for poetry.

Her poems are thick with fear, frustration, determination and resolve, and she writes on pregnancy, motherhood and the body, sex and violence (and male sexual violence), domestic matters, human closeness and serial isolation, and a culture of family, neighbours and recipes, alternating between what heals and restores, and what so easily threatens to destroy. Throughout all of this, much of the book is anchored in the immediate, as she writes to open the poem “(moonchild)”: “(don’t give up on him) (take the moon) (we created it from / our sorrow) (& it hangs in there) (I lug him upstairs) (I make soup) (call the home- / opath on Thanksgiving) (the exterminator on Xmas morn.) (perform the necessary / exorcisms) [.]” Further in the same interview with Emily Brandt, they discuss the book’s alternating elements of nourishment and violence:

EB: The book felt very nourishing, like a meal, in part because of the visual elements. There’s also so much narrative and so much rich language. As a writer, you’re creating this form and moving through it so beautifully and challenging so many of our ideas of what a mother is, what a child is, what violence is, what nonviolence is, what a book of poems can do. I had a student who was wearing to school yesterday this t-shirt that had a blonde woman in her underwear pointing a gun at whoever. I said to him, “I’m kind of offended” and he said, “It’s about power though. This is about power.” So I said, “Yeah well, her mouth is open, she’s naked,” and he was like, “But she’s got some power.” So then I showed him your book and he flipped through it and read a little of it and handed it back to me and said, “Miss, it’s the same thing.” So how is this book not the same thing as his shirt? Or is it?

MR: That’s the best question I think I’ve ever been asked. I think there is probably some sort of relationship there because I feel like the book does glamorize violence. It doesn’t show you how fucking fucked up it actually is, and it can’t because it’s a representation. It’s about a play therapy kind of world. But the book isn’t really selling anything. Because it’s outside of the pop culture market, maybe it gets away with some stuff that otherwise it would be more accountable for. But I think the whole book is about that, about film. There is a poem in there about a woman—“(una pistola) (bajo el vestido)”—in front of a camera with her shirt undone holding a machine gun on an album cover, and the complexities of that situation. Because she also has a gun below her slip for at night when she’s in bed for her pinché lover, uncle, guardian. So there is this duality of a glamorous vision of a woman with a gun during the daytime on an album cover, versus the threat of actual violence and a woman using a gun as self-projection against male sexual aggression.