The shuffling will promote a kind of agitation from which everything will need to be suddenly contemplated: the courthouse in Tucson, where the previous week I had watched the “ceremony” of detaining between fifty and sixty people through the fast-track system known as “Operation Streamline.” Those men and one woman also shuffled, but within the actual constraint of chains. They sat on benches, watching and watched, listening to the judge who did not listen.

And though the protocol maintained an automation, the judge was confused, mixed up one man’s name with one who turned out not to be the man in question. Later another man, whose first language was not Spanish and whose native language did not match the languages spoken by court interpreters in the room, was dismissed. So, despite the ceremony’s attempted rigorousness, a slight air of the unexpected and impalpable moved through the courtroom that Monday.

Ideas don’t scare me, but their bodies, gravities, and actions do. The monastic gardens will bloom like hallucinations. We will rest and watch a water fountain with four lion heads spewing infinite streams. Thoughts such as these will pass by: Are we monotone, restless, spiteful and the woods and trees and light corridors of this planet are not? Have we descended like an alien force on a beatific countenance only to become its ultimate poison? Inside one of the chapels, light will play with walls. It will be quiet. I will be alone for a brief moment, in front of a large altar. A sheet of memory will peel off. I will sit in one of the wooden chairs and focus on the saints whose names I don’t know. Another thought will pass: You will not always be able to do this. Then an image of myself, a smear, will pull through the air. A portrait against a green background and several doubling heads slowly dissipating. (“ORACLE ROAD”) 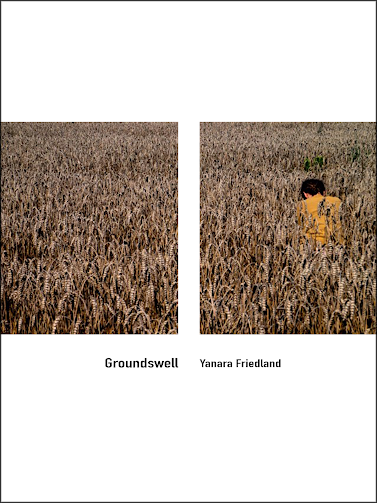 I was first introduced to the work of German-American writer, translator and teacher Yanara Friedland through her debut, the 2015 winner of the Noemi Press Fiction Award, Uncountry, a mythology (La Cruces NM: Noemi Press, 2016) [see my review of such here]. Her latest title is the evocative Groundswell (Essay Press, 2021). Groundswell is self-described as an essay collection, although the division of genre through these two books seems rather arbitrary, as both could be considered echoes, structurally, of each other: one book, as a thought continued, and furthered, leading directly to the next. Both, for example, are assemblages of short prose, accumulating into the structure of the larger collection, speaking to and about borders, identity and belonging through a blend of research and memoir, the author/narrator works through a consideration of such. The seeming arbitrariness of genre-designation reminds of Vancouver writer Michael Turner, who submitted the manuscript of his Hard Core Logo (Vancouver BC: Arsenal Pulp Press, 1993) sans genre, for it to be originally produced as a collection of poetry, and then, once the film adaptation appeared in 1996, was reissued as “fiction.” Even as Friedland, herself, suggests early on in Groundswell: “Everything is biography and sentences.” Currently an assistant professor at Fairhaven College of Interdisciplinary Studies Bellingham, Washington, her online biography begins:

I am a writer and translator born in Berlin, whose research interest include border poetics, autofiction, critical and creative insurgencies in archives, and experiments with documentary forms. My first book Uncountry: A Mythology (2016) selected for the 2015 Noemi Fiction Award, narrates the gaps between official history and the more unreliable spaces of private memory and unspoken unofficial history. My second book Groundswell (Essay Press, 2021), a collection of border narratives, interviews, testimonies and biographies investigates the living archive of ruins, walls, and borders. The essays include lived experiences of borderers, walks along the geopolitical line, as well as my own confrontation with spatial and temporal bordering processes.

Groundswell is structured as a suite of lyric essays on borders, crossings, occupations and conflicts, opening with histories surrounding Germany, including around Nazi occupation and the German-Polish border, before moving her thoughts into and around the American-Mexican border. She writes of returning to Berlin as an adult and exploring her childhood geographies, providing linkages to how borders are considered in other fraught geographies, including Arizona, where she lived and taught for a time. Friedland works through archives, research and interviews, as well as her own commentary, working through identity as much as the arbitrariness and the, at times, cruelty of borders. She writes a documentary poetics that weaves through Berlin and Arizona; she writes of Palmyra, and the erasure of Jewish cemeteries in Poland. She speaks of how she carries her geography of origin inside her, exploring the implications of carrying as much of the dark histories of that space as any other. She studies actions and reactions, and the stories of displacement, trauma and horror. As she writes to end “STATELESS,” writing:

I imagine taking this country, cutting it out of my body, drowning it in the sea. What would it be like in here? Would it precede absence or nostalgia, a primordial crime? Instead, I buy a light bulb that will last one thousand hours and listen to Saskia Sassen speak to a half-empty room. “The Guantanamo hunger strike was inspired by the IRA hunger strike. In other words,” she adds, “meaning circulates.”

And I this raven with a piece of hot coal in my beak.

Given her commentary around occupation, and even colonization, it does seem curious her relative silence on aboriginal communities, whether in Canada or the United States: colonized peoples that have historically and systematically been brutalized for centuries, even continuing to the present-day, although that could easily be seen as too vast a potentially related but entirely separate conversation to include here (and the conversation isn’t not-there in Friedland’s work, but the shadow of such dark and unacknowledged histories have grown long, especially in recent months). There are structural echoes in Friedland’s work to a number of other non-fiction works over the years, writers that have blended the personal with research, weaving in and around their own articulations of archive and experience, including Ottawa writer Elizabeth Hay’s non-fiction trilogy on living beyond her familiar geographies: Crossing the Snow Line (Windsor ON: Black Moss Press, 1989), The Only Snow in Havana (Dunvegan ON: Cormorant Books, 1992) and Captivity Tales: Canadians in New York (Vancouver BC: New Star Books, 1993). Other echoes of prose that blur the boundaries of genre could be seen through Anik See’s Sausade: The Possibilities of Place (Toronto ON: Coach House Books, 2008) [see my review of such here], Monica Kidd’s any other woman: an uncommon biography (Edmonton AB: NeWest Press, 2008) [see my review of such here] and, more recently, Johannes Göransson’s Poetry Against All: a diary (Saxtons River VT: Tarpaulin Sky Press, 2020) [see my review of such here]. It is curious to consider how simultaneously Friedland’s travel might have originally prompted her research as much as her interest in researching borders and countries might have led her to explore travel. Simultaneously managing a prose both lyric and narratively straightforward, her research connects the past to the contemporary, writing of the refugee and the displaced, of traumas not purely historical, flowing through and across geographies, ideas and thoughts like water. As the piece “CROSSINGS” begins: “What do we take into the future?” Further in the same essay, she writes:

Hannah Arendt wrote “We Refugees” in the early 1940s while in exile, laying out a fundamental and brilliant analysis of the modern German-Jewish condition, a protracted migratory identity that then threatened statehood and nationalism. The eternal and yet failed attempts of Jews to assimilate (“You can hardly realize how serious we were about it”) went beyond adjusting to the country they were born into and to the people whose language they happened to speak (“We adjust in principle to everything and everybody”). Despite 150 years of Jewry proving their non-Jewishness, they “succeeded in remaining Jews all the same.” Arendt equates the Jew to the refugee, not protected by citizenship and whose stateless identity bears an ongoing political threat. “If we should start telling the truth that we are nothing but Jews, it would mean that we expose ourselves to the fate of human beings who, unprotected by any specific law or political convention, are nothing but human beings. I can hardly imagine an attitude more dangerous, since we actually live in a world in which human beings as such have ceased to exist for quite a while; since society has discovered discrimination as the great social weapon by which one may kill men without bloodshed; since passports or birth certificates, and sometimes even income tax receipts, are no longer formal papers but matters of social distinction.”