Johannes Göransson, Poetry Against All: a diary 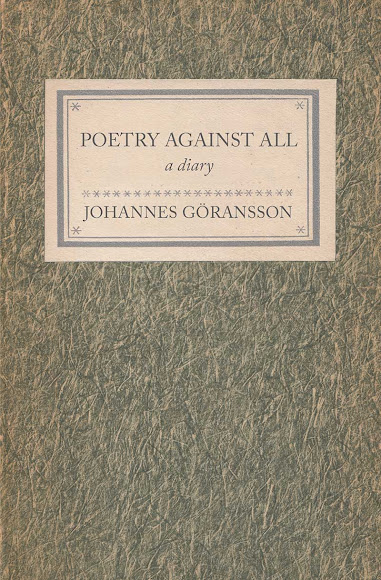 I’m enjoying American poet Johannes Göransson's latest, Poetry Against All: a diary (Saxtons River VT: Tarpaulin Sky Press, 2020), a journal-work composed as a book-length meditation on poetry, art, pornography, ruin, translation, home, tourism and a visit to his former childhood home in Sweden. He blends the immediacy of his extended travel and interactions with lengthy and repeated examinations and musings on the work of artists including Susan Sontag, Francesca Woodman, David Lynch, Lars Norén, Werner Herzog and Andrei Tarkovsky, among others. “There’s something decadent about riddles. They always threaten to generate excess,” he writes, as part of “DAY 9,” “to fail to anchor the imagery, become unredeemed imagery, become kitsch. How many times have I heard poets pontificate: Poems should not be riddles because they should be ‘accessible.’ Riddles are not poems because they contain secrets. But it’s exactly the sense of a secret that makes them poet, fascinating. I’m intrigued by Laura Palmer, by Francesca Woodman. The riddle that cannot be solved: it leads me into the red room movie theater.” Subtitled “a diary,” Göransson’s entries remain dateless but for days numbered consecutively, beginning with “DAY 1”; one might suggest that temporal precision, in that regard, might be both misnomer and potential distraction, although the sequence of forty-four days does end with a date: October, 2013. Is this, in the end, important at all, or mere distraction? Are we, at the end, offered the chance to count backwards, to see when this book had begun?

While Thomas was mowing his lawn, I went for a walk across the fields. I just kept walking. After a while, I realized where I was walking. When I got there, strangely my first reaction was: What a great house, why would anyone ever sell such a house? I felt like it would be a good investment. Capitalism has infiltrated my nostalgia.

Can there ever be such a thing as “pornography of home”? I mean staring at the place where you’re actually from. I didn’t want to go inside. I wanted to take away its soul. I can’t return. That’s what made me feel like I was both drowning and too light to walk. Thomas figured out where I had gone and pulled up in his car, took me back through the fields and fields and they surrounded us.

I want to take away all my ties to this place.

Göransson explores his conversational musings in the form of daily diary entries, a journal-esque lyric processional reminiscent of Joshua Beckman’s paired essay-titles The Lives of the Poems and Three Talks (Wave Books, 2018); in comparison, Beckman might explore his thinking more in the form of the lyric essay, but both writers manage to explore their thinking as it occurs, and not purely as finished, decided theses. These are books that ease out their discoveries, ones that emerge even through the process of reading. Poetry Again All is a book of declarations, conversation and uncertainty; a book of curiosity; of tensions, shame and vulnerability. He writes a misanthropic isolation that runs throughout, paired with an urgency to connect and comprehend, while still remaining at a safe distance, remaining both observer and observed. As part of ‘DAY 14,” he writes: “Joyelle wrote. Majken is babbling compulsively. The compulsion must be the pleasure of language. Something akin to vandalism. Language scratched the public sphere. The origins of expression is obscenity. My daughter is obscene in her language. Children are obscene. Poetry is obscene. But there are those who want to maintain the illusion that it is good for us.”

As his text repeatedly offers, these entries are supposedly excised from the manuscript that eventually became his previous book, The Sugar Book (Tarpaulin Sky, 2015). Given that Poetry Against All is the first title of Göransson’s I’ve read, so I would be curious to understand just how different that prior title is, and might have been; is this a dark thread that Göransson has pulled from that earlier manuscript, or might this be something other? The suggestion, also, allows the possibility that, although the days might be consecutively numbered, they might not necessarily exist immediately back-to-back. Were these forty-four days composed, instead, across fifty or sixty days? One hundred?

What is this thief’s journal I’m writing? I have to erase these pieces from The Sugar Book. They don’t belong. I don’t want my life to ruin this book. I want to leave that to the inmates. It’s their book. I’m just building the stage so that they can tear it down. Their voices are circulating through my head. More corpses for poetry.

I saw a landscape painting torn by a dull knife. Saw a tree that looked like it consisted of tangled limbs. I was out walking. Stopped by the People’s Park. Thought about the riot. Thought about the paintings of the riot. Saw a horse-slaughter. It was the Paris Commune. The sentence about Crime Flower was its voice over.

Gertrude Stein supposedly said she went to France to be alone with the English language. I went back to Sweden to be contaminated by Swedish.