She thought the status of refugee was a warranty
to return. Between her and beyond, a nation,
which also translates to a horizon. Never mind
that her village took a new name; the jar
of water from her childhood river, ten stones,
and five twigs: clues that home is transitive.
She had a version of her country under the bed.
We are permanently old and ever new
when we build a nation. (“Revolute”) 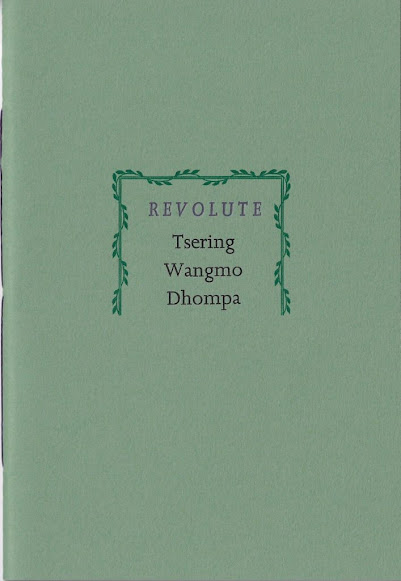 Known as “the first Tibetan female poet to be published in English,” San Francisco poet and writer Tsering Wangmo Dhompa’s latest publication, her first poetry title in a decade, is the chapbook REVOLUTE (Charlottesville VA: Albion Books, 2021), produced as the fourth title of Albion Books’ Series Seven [see here for my reviews of the first, second and third of the same series]. Dhompa is the author of the poetry collections Rules of the House (Berkeley CA: Apogee Press, 2002), In the Absent Everyday (Apogee Press, 2005) and My rice tastes like the lake (Apogee Press, 2011) [see my review of such here], as well as the memoir/non-fiction book A Home in Tibet (Penguin India, 2013), a title published in the United States as Coming Home to Tibet: A Memoir of Love, Loss, and Belonging (Boulder CO: Shambhala Publications, 2016). Furthering a number of the concerns of her earlier works, Dhompa’s new chapbook speaks of exile and return, and the translation into further exile, with the discovery that what was once “home” has since changed, evolved, to a point beyond recognition. In a triptych of three poem-sequences—“Revolute,” “The history of sadness” and “Inner revolution”—Dhompa writes on memory and belonging, home and time, temporal and familiar spaces, and the collision that can’t help but emerge between two different cultures. “What grouping of texts, which images,” she writes, as part of the longer title sequence, “will speak to someone who is not me, / but like me, has no place to escape / from the place of belonging / that is no more.”

Dhompa’s published work-to-date has very much engaged with lyric explorations around emerging from one culture and continent to living fully within another, writing in and around exile and notions of belonging, as well as the concerns and complications around attempting to exist fully within the possibilities of both spaces. “Mothers remember / the bodies they buried. / Life after death,” she writes, as part of “The history of sadness,” “and death / in every breath. Belonging: a verb, / and belonging / a strip of hope fed with orchids / on sale and recipes / brought from a country I now hover / over in virtual maps.” What is curious about this current work is the way in which her poems extend across a larger canvas: not composed as suites of shorter meditations, but longer sequences that stretch beyond what she has previously attempted. The effect allows for a further level of depth and inquiry, and an admission in how her lyrics are so very much connected to each other. Further on in the same opening sequence, she writes: “The point that ink makes is storied, we’ve memorized / its conventions. The primary theme is land / and who stole it.” Through the triptych of poems, Dhompa slowly evolves her lyric from one of the disappearance of what it was they had left behind, to a poem that includes her mother, writing around mothers and mothering, and the potential loss of her mother, even beyond her mother’s own loss of homeland. “Is there a replacement / for the slow and stretched vowels in a mouth / accommodating something new?”

It is the branches closest to the ground
mothers warn about. If you stray too
far, you will fall. If you lean too much, you
will lose your center. In class, teachers prop gravity
as a lesson about equality. Outside, history is cruel,
our fall falling without ceasing. Even simple questions
trick us. What is your medical history? No branches
to fall back on, no headstone where they jumped
into the river, or shattered their hearts. To make
the doctor comfortable, I write, heart disease. (“The history of sadness”)