Once, an Iraqi spoke of a bird asleep
on his throat before he opened his mouth
to that white rush of waves. Believing
he’d turn into a tree from his grief,

he planted his tongue-seed into the sea:
a hundred birds fell into his branches.
The whites of his eyes were black with flies.
Heaven is nothing how the living describe:

the roads, paved with gold, burn like white
phosphorus—you wear what killed you
on the outside: Your lungs are two
overturned bells filled with water—

your wounds are still warm to the touch.
Beneath you, the earth burns so brightly
it looks like the head of a nail hammered
Into the emptiness of a palm. 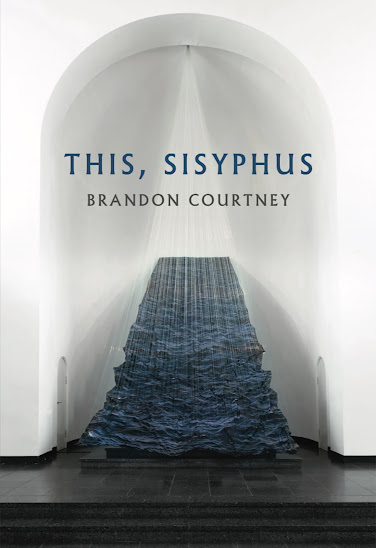 I’m a little late to the party on this one, but I’m finally going through American poet and United States Navy veteran Brandon Courtney’s third full-length collection, This, Sisyphus (Portland OR: YesYes Books, 2019), following the publication of The Grief Muscles (The Sheep Meadow Press, 2014) and Rooms for Rent in the Burning City (Spark Wheel Press, 2015). Courtney’s a lyric of exploration and focus, turning each thought over repeatedly for further study. There is something beautifully evocative in the lyric of poems such as “SABBATHLESS,” that begins: “Yes, I invaded / his body— / replacing what / was previously / inside. I breached / his skin / as if it were / a penitentiary: / as if a prisoner, I stormed / the warden / of his sinew, / passed the bastille— / bones and tendons— / until everything / quivered / in witness / to the unknown: / my body cruciform.” I’m curious at how his military service has affected the body of his writing, a thread that works its way through the collection in subtle and overt ways, providing imagery, content and passage; I know the United States has a far different military culture than in Canada, and have been more aware of American veterans over Canadian veterans releasing poetry collections; I would be curious to know if there have been any articles written on such, attempting to track the poetry of veterans. Obviously, the experience of military service would provide an entirely different perspective and series of experiences, some of which couldn’t help but fall into the body of these lyrics. “Wrapped in burial blues,” he writes, to open “REPATRIATION,” “a uniform / meant for winter, the few medals // he’s earned pinned to wool, / invisible, his corpse is crushed // like October leaves inside a body / bag that reeks of burning tires, // rustles like tracing paper. Soon, / his body will teach soil to be silent.”

There’s a density to Courtney’s poems, writing through rhythmic declaration, hymn and song along solemn paths, and writing on the physical body, and ways in which one loves, lasts and endures. He pushes through the intertwined paths of faith and grief, pushing that particular boulder up an impossible incline, as he writes as part of the poem “DROWNING STAINS THE OCEAN GRAY,” “[…] And I need / so badly to believe / that you’re my God and you reside / in everything: the multiverse and empty space, / down to every carapace […]”