My dad didn’t say a lot
but he had only wonderful things to say about his grandmother
his mother and his sister. He never talked about his father.
I never knew anything else about anyone else in his family.
His sister-in-law told me
And this was before I told her about the abuse,
“Our priest was not part of that. I will tell you, though,
Your grandfather was nicknamed ‘the pervert.’
Your grandmother wouldn’t let the children out of her sight.”

I would love to talk to Aunt Elizabeth!
“Can you tell me if my dad went to church? Aunt Elizabeth,
aren’t you wondering why your Tommy died with no family by his side?”
My father may as well have hung himself.
But she’s ignoring me. Her entire family has shut down,
won’t contact me. his brothers—Uncle Walter, a bus driver—
I’ve met once. He’s in denial, a nice enough guy, nothing to say.
Uncle Bud never called me either. He’s dead now. (“tom”) 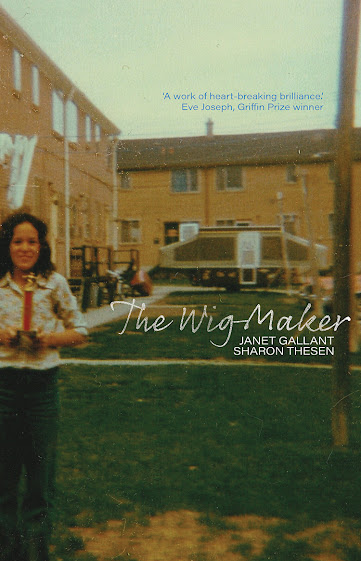 I’m fascinated by the collaborative lyric memoir-in-poems by Janet Gallant and Sharon Thesen, The Wig-Maker (Vancouver BC: New Star Books, 2021), a harrowing account of childhood physical and sexual abuse, the suicide of a sibling, abandonment, grief and resilience. The poems in The Wig-Maker are told in the voice of the storyteller, Lake Country, British Columbia wig-maker Janet Gallant, as shaped by her neighbour, the poet Sharon Thesen, with the occasional aside by Thesen interspersed throughout. The poems in The Wig-Maker offer a memoir propelled by Thesen’s lyric clarity, writing out the story of Gallant’s life as a biracial child, abandoned early on by her mother, and left with her father and eventual stepmother. The narrative also includes Gallant’s more recent discovery, via DNA, that the man she knew as her father wasn’t her biological father, adding new layers and complications to an already fraught history.

What does it mean when a work is ghost-written, but the writer shaping the words isn’t a ghost? I suppose the closest descriptor might be “collaborator,” as Thesen receives and reshapes Gallant’s stories, the threads of Gallant’s tellings, into lyric form. The poems speak to Gallant’s childhood and sexual abuse by her father, her slow realization and exploration of her biracial identity, the stories of her siblings and their own traumas and eventual deaths, and the onset of her apopecia, which caused her to lose her hair, becoming bald by the time she was forty-six. As she writes in her introduction, “After a couple of frustrating years and a several thousand dollars spent on off-the-rack wigs, I wasn’t satisfied. The fit was never quite right, the hairline didn’t look natural. I didn’t feel like me. So, my journey into the craft of wig-making began.” As one of Thesen’s asides offers:

Janet’s hair, before it fell out, and when it began growing back as we worked on the text, was black. After she received the results of the DNA test, it fell out again. Today, it is growing back in platinum white, the legendary hair-turned-white-overnight of someone who has a bad shock.

There is something reminiscent in this collection of when prairie novelist Rudy Wiebe collaborated with Yvonne Johnson to write out her own story, resulting in the award-winning memoir Stolen Life: The Journey of a Cree Woman (Vintage Canada, 1999). There are ways in which Thesen’s lyrics point to this process as an examination, documentation and potential exorcism of some of Gallant’s past, needing to say aloud in print what can possibly be set aside. The setting down of these poems might allow certain elements of Gallant’s past to be, finally, relegated to the past, with other elements recorded for posterity, and out of respect for some of those loved ones that she has lost, all of which build The Wig-Maker into a powerful, necessary and difficult collection. As Gallant writes as part of her introduction:

We are writing this book, due to my lifelong need to tell the story of my brother Billy, dead by suicide before his fourteenth birthday; to tell the story of our sister Penny, dead at the age of forty, ravaged by breast cancer after suffering, her entire adult life, on the streets of Canada with schizophrenia. The story of innocence lost, taken by the one called father, overlooked by the lady of the house. A story of three generations of women (my grandmother, my mother, and my sister Penny) whose lives, and loved ones, were taken by the same mental illness.
My friend Melissa asked me if music would be woven into this telling. She knows how important music was to me, is to me. I told her I hadn’t considered it at that point. She got me thinking. I look forward to following up with Melissa, to let her know how it worked out. To let her know the music is indeed here. Lyrics of truth, and notes of healing, are here.