In august the sun held a coin to the silverberries. They ripened to cake among the gunshot, among the wounded with their piecemeal apples and parchment lips. Big houses roes bright as bezants from the soup bones of that bayou. In the cellars of the earth gandy dancers danced, singing, Gulp what the fountain gives, give this in return. 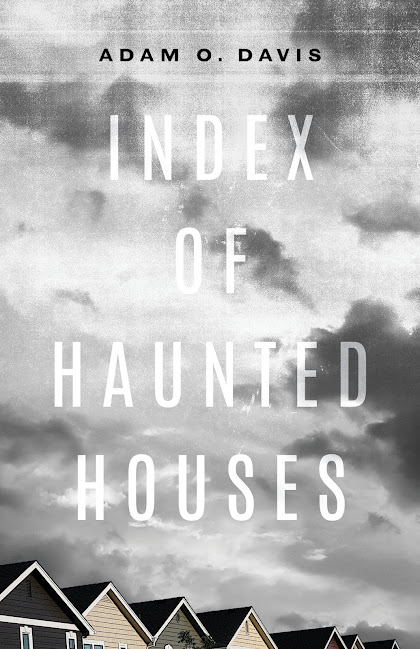 I’m fascinated by San Diego, California poet Adam O. Davis’ full-length debut, Index of Haunted Houses (Louisville KY: Sarabande Books, 2020), a collection o prose and lyric poems that examine ghost stories, and how the afterlife impacts upon the living; how those remains impact those who do remain. “This house will / outlast / me and all those ghosts / I know.” he writes, to open the poem “MANIFEST DESTINY.” His poems are perfectly dense, lyrically open and wonderfully precise, offering not a single wasted word, space or image.

Davis populates these poems with ghost towns, abandoned hotels, small town lore, mosquitoes and ramshackle houses, amid an array of incredibly memorable and provocative lines, whether “The sky of New Jersey / is imitation crocodile.” (from “THE BODY OF NEW JERSEY, 1980”), “Time is / the colony that / farms our ruin.” (from “A HOUSE UNFIT EVEN / FOR GHOSTS”) or “June is the first / month in bank / robbery season.” (from “NATIONAL ANTHEM”). The book is rife with unexpected images, writing poems anchored through these ghost stories, including a thread of haunted house poems throughout—“Ghost of Macondo,” “Haunted House, 1780,” “Ghost of Motel 6,” “Ghost Story, 1971,” “Ghost of General Electric,” “Haunted House, 1978,” “Ghost of Polaroid,” “Haunted City, 1967,” “Haunted House, 1980,” “Ghosts of the Bell System,” “Haunted House, 1692,” “Ghost Story, 1848,” “Ghost of NASA,” “Index of Haunted Houses” and “Ghost Story, 2020,” before ending the collection with the stand-alone coda, “Ghost of a Ghost Story.” The poems suggest less a series or sequence of ghosts than houses haunted through their own histories, and what had been abandoned, left behind or left unfinished. And what, exactly, is it about 1980 that causes it to be crossed out twice in his titles? “House, I feel altogether / brisk,” he writes, to open “GHOST OF GENERAL ELECTRIC,” “bundled in nerves // that won’t quiet.” Later on, to end the poem “PACIFIC AMERICANA,” he writes, “Forgive us, history. // We orphan /// everything // we touch.” These are poems that examine the notion of ghosts and their impact, and the ways in which sites themselves, whether towns or hotels or houses, are themselves what hold the haunting; the ghosts of all the remnants, memories and abandoned possibilities. As Sarah Gorham and Jeffrey Skinner collaboratively write to open their short introduction to the collection:

The poems of Adam O. Davis’s debut collection are epigrammatic, apocalyptic, and downright scary at times. Of course they are. This is a book of ghost stories, and for the most part, ghosts are jealous monsters, intent upon our destruction. They never appear overtly here, yet their presence tiptoes into the book the way we gradually become aware of spirits in haunted houses who tread over creaky floors and slam doors and issue sudden gusts of wind.
Fortunately, Davis recognizes all the standard tropes and approaches his subject in a self-reflective way, coming up with new forms and visionary occupations for the disembodied spirits. They are consistently surprising, convincing, and even delightful. We begin to understand that haunting cam be a way of life. And there are metaphoric wonders everywhere: “A spell / of soapy / weather. // A milk-solemn / spinster.”