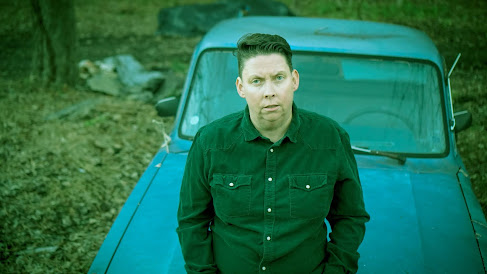 Tanya Olson lives in Silver Spring, Maryland and is a Lecturer in English at UMBC (University of Maryland, Baltimore County). Her first book, Boyishly, was published by YesYes Books in 2013 and received a 2014 American Book Award. Her second book, Stay, was released by YesYes Books in 2019. In 2010, she won a Discovery/Boston Review prize and she was named a 2011 Lambda Fellow by the Lambda Literary Foundation.

My first book Boyishly was a great boost in that I was starting to think I might be the only person who believed I was a good poet. I liked what I was writing and thought it good, but wasn’t sure anyone else was on that page. Getting picked up by YesYes Books in the way I did helped me believe in my writing again. I wanted a press that would support me in growing as a poet; YYB has definitely been that place for me.

Stay is a more cohesive work. For Boyishly, I just wrote poems for a long time and then tried to think about them as a book. Stay was me writing thinking about the cost of staying or leaving ideas, identities, and places. Every poem circled around that one idea over a much smaller period of time.

I started writing later in life; I took 1 creative writing class as an undergraduate and liked it, but didn’t really feel all that good at it. When I was in my 30s, I started going to an art series in Raleigh called Stammer; the poets were really the ones that made me think “That’s what I want to do.” And I’ve never thought in fiction or non-fiction. I love to read both, but no story I have ever wanted to tell or idea I have wanted to explore has made sense in any form other than poetry. I wish I could write plays; having people say your words, bring them to life, seems fantastic. But I really only think in poetry.

I start by thinking about what I’m thinking about. After Stay, I was thinking a lot about the radio, how the radio allowed people to hear accents from places they left (imagine moving to Detroit and hearing the Carter Family on one of those blaster stations), feel connected to people and places, give folks a shared culture. I wasn’t sure why I kept thinking about that, but I just let myself read and think and scribble about radios. The poems that are coming out of that start aren’t very directly about the radio, but they definitely relate to that thinking. Few poems end up looking like what they started looking like and I think that is for the better.

For Stay and my new project, I have very much been working on a book from the beginning. Boyishly was a stack of poems I had written over lots of years; then I had to figure out what held them together. I found the latter method much harder.

I love to do readings and love to try poems out for readers, to hear what they are hearing or responding to. It helps me think about and often see what a poem is really about or what its real engine is.

I always think about a question in a book; Boyishly thinks about what it means for masculinity to exist in a body other than male. Stay thinks about the cost of leaving or remaining in places, ideas, or identities. The new work (right now its folder is labelled Last Butch Island but it was once labelled radioradio, so who knows) is honestly just about me. How am I my parents? How did I learn to be white? What did I have to unlearn? What has been consistent in me? Maybe one of these will rise to be the central question and then I can revise to put that question in the center.

I think writers of all stripes help readers understand themselves or see the world or one of its aspects in a new way. We get fed pretty consistent stories by a lot of media (including many writers) but writers can provide different narratives, mark different paths to follow. That’s valuable and important; it may not be as immediately impactful as something like legislation or action, but I think it is just as important for shaping a new culture. Writing isn’t the only place this work can occur but it is an important one.

I have really enjoyed working with KMA Sullivan at YesYes; really, the whole YYB team has been helpful in making Boyishly and Stay the best books that can be. Editors though have a special role in making a book stronger. KMA has been able to understand both what I want the book to do, as well as what else the book may be doing. Writers aren’t always the best at understanding their own work, so to have someone you can trust and who you know has your best interests, as well as the best interests of poetry (and the press) at heart is a huge support.

The fabulous Eloise Klein Healy told me (when I was expressing frustration at feeling ready for a book and not having one) “You keep knocking at the front door of poetry and they are never going to let you in the front door. But there are a lot of ways into the house of poetry and once you are inside it matters a little less how you got in.” She also told me “Adrienne Rich died, they chose a new lesbian poet, and it wasn’t you, so get over it.” EKH is a font of wisdom.

I am not a daily writer, but I am a daily thinker. I think about poetry or a poem or my central idea every single day. I also am pretty good at solving poetry problems in my head. Eventually there comes a part of the process where I am writing everyday and I do a good job of giving myself one problem (Where should this line go? How do I get from A to B?) to think about and solve. That problem kind of bubbles away on my backburner until I figure it out. I’m of the Gertrude Stein school- It takes a lot of time to be a genius. You have to sit around so much doing really, really nothing. That nothing is super important to me.

Smelling fresh coffee or fresh iced tea always reminds me of my mom. The smell of tomato plants (which I hated as a kid) make my house feel like a home. We grow Thai basil and lemongrass in the beds by our front door; running my hands through those on the way in the house is one of my favorite habits of summer.

I incorporate a lot of music and lyrics into my poems; I love the way those two arts can talk to each other. I think Nashville ought to hire poets to be in writers rooms. I always build a playlist to listen to as I am working on a book. Stay has these songs within it somewhere.

I have a deep admiration for the work of Susan Howe; even though we are nothing alike stylistically, I see her as a writer who has simply done the work she wanted to/needed to do and let the world catch up to her. I aspire to be that kind of writer. Sinéad O’Connor and Ashley McBryde are my two favorite songwriters right now; they are fantastic storytellers and I try to steal technique from them every chance I get. Right now I’m trying to figure out how to “write angry” from them. aziza barnes is a writer who I always want to know what she is doing. I so admire their work in all genres. Jennifer Jackson Berry is a YesYes comrade with a new book out who I think is just a crackerjack writer.

I want to keep writing; that’s really the main thing. Anything that happens after that is gravy, but as long as I can write, I’m good. I do wish MLB and WNBA teams would sponsor a poet to be attached to each team; I will volunteer to be a test case for this program.

I love teaching. I’m a teacher and a poet. Those are probably the two things I was meant to be. I wish I could write country songs. My dream job is to be an authenticator for a baseball team OR the person the umpires call to make the final decision on a reviewed play OR the person who carries the headphones out to the umpire when they call the decision maker. All of those seem to offer a good chance to watch a lot of baseball. I call the WNBA security woman who is often at the Mystics game My Job because I think I can look good in a suit and look vaguely menacing. Turns out she’s a trained law enforcement professional, so I can’t really be her, but I’m willing to enter into an apprentice program.

I love words and language. I always have, since I was a kid. Writing brings me lots and lots of joy.

I really liked Annie Proulx’s Barkskins, which I  read recently. I love big ambitious writing that sweeps through time and tries to define places. Kevin Barry’s Night Boat To Tangier was lovely. I haven’t seen a great film in forever. I think the film industry gave up on “good” and just pumps them out now.

New book of poems, maybe called Last Butch Island, maybe not.  I can’t wait to see what it is going to be.

Posted by rob mclennan at 8:31 AM
Labels: 12 or 20 questions, Tanya Olson, YesYes Books