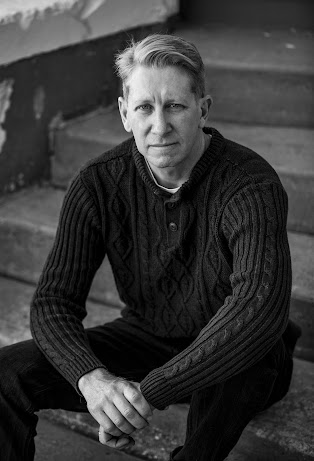 Nathanael O’Reilly is an Irish-Australian poet. He is Assistant Professor of Creative Writing at The University of Texas at Arlington. His books include (Un)belonging (Recent Work Press, 2020); Preparations for Departure (UWAP, 2017), named a Book of the Year in Australian Book Review; Cult (Ginninderra Press, 2016); Distance (Ginninderra Press, 2015); Suburban Exile (Picaro Press, 2011); and Symptoms of Homesickness (Picaro Press, 2010). More than 200 of his poems have appeared in journals and anthologies published in twelve countries. His chapbook, BLUE, appeared recently with above/ground press.

My first chapbook, Symptoms of Homesickness (Picaro Press, 2010), didn’t exactly change my life, but it gave me confidence, affirmation and opportunities. My poems were being published in journals from 2005 onwards, so I’d been working toward a collection for some time. Having the chapbook published let me know that I was on the right path; it was also instrumental in my receiving an Emerging Writers Grant from the Literature Board of the Australia Council for the Arts. When I was in my teens, writers like David Malouf, Peter Carey and Tim Winton were receiving grants from the Literature Board; it never occurred to me to aspire to such an achievement – that happened in a different world to mine. So, I’d say from 2010 onwards I was able to think of myself as a real poet, not just someone who dabbled in verse (to paraphrase Patrick Kavanagh). My recent work is more confident, experimental, concise, perceptive and relaxed. My voice has evolved over time and I’m comfortable with my style and subject matter.

I wrote my first poem when I was in year eight, so I would have been twelve or thirteen. I wouldn’t have been reading poetry for pleasure yet – most of my reading would have been novels – but for some reason the impulse was there to start writing poetry. I later found out that my father had written poetry for many years and that some of my Irish and English ancestors were poets – one of them listed his occupation as poet when he emigrated to Australia circa 1850 – so perhaps there’s something in the DNA. By the time I was seventeen I was writing a lot of poetry and had become an avid reader of Yeats, Keats, Heaney, Eliot and Hardy.

I don’t have any trouble starting writing projects. Once I have the idea, I’m eager to write it down and start developing it. Usually the initial burst of inspiration leads to a fairly complete draft, at least with regard to length. Occasionally a poem arrives almost complete, but usually I will revise obsessively, line by line and syllable by syllable. I wrote the first draft of a recent forty-line poem in about twenty minutes, but then spent about six more hours revising on the same day. I also take a lot of notes, usually just phrases and lines, and sometimes those are carried around for years before developing into a poem or coming together with other notes to make a poem. I’ve had published poems take twenty years from start to finish, and others take less than an hour.

For me a poem begins with a phrase, a line or an image. Sometimes I’ll compose a whole stanza or a short poem in my head while running, but once I get the words on the page more lines usually follow. I just need to find the entry into the poem, and then I can get into the flow. For most of my writing life I have written individual poems that later became part of collections. However, during the last few years I’ve started writing sequences that are pre-conceived, and I currently have three book-length manuscripts in progress that each started with an idea for a book project, rather than a poem. When writing individual poems, I’m also aware that it will eventually become part of a collection, but I don’t usually know what the focus of the collection will be in advance.

I’ve been giving public readings for a decade now. At first, I was pretty nervous about reading my work in front of an audience, and I worried that the audience would miss a lot in the poems because they couldn’t see them on the page. However, I quickly came to enjoy reading my poems to an audience and receiving feedback during and after the reading. I now think of readings as an important part of the writing process and a valuable way to see if the poems are working. I’ve given readings in seven countries to a variety of audiences, and it’s wonderful to see the different ways in which audiences connect with my work – they often pick up on ideas, themes and messages that I didn’t expect, and it really confirms my belief that the most direct route to the universal is through the specific.

I’m not sure I’d describe my concerns as theoretical, but I write about subject matter that is incredibly important to me and hundreds of millions of other people, such as belonging, expatriation, exile, identity, ancestry, landscape, alienation, homesickness, fatherhood, nostalgia, death and grief. I’m constantly trying to find my place in the world – and since I have three citizenships and have lived in six countries, that’s pretty complicated. My most recent full-length collection, (Un)belonging, grapples with the question of whether or not one can ever feel at home in any place after having lived in so many. The issue is not just about physical place, where one was born, where one lives, or family and citizenship – those factors intersect with culture, history, language and practical problems such as economics, immigration law and the often-exclusionary politics of nationalism.

I think writers play a central role in the larger culture. Our best writers give voice to the voiceless and speak truth to power. They show us a multitude of ways to be human. Writers can speak for a culture and even be prophets. I don’t see myself as being one of those writers, but I hope I can produce work that readers connect with on an intellectual and emotional level that rings true to them and speaks to their experiences.

I’ve been fortunate to have had some great editors who gave me detailed and insightful feedback and helped me to become a better writer. I think it’s essential to receive feedback from talented and experienced editors, whether they are working in a formal role for a publisher or journal, or they are trusted fellow writers. I’ve received tremendously helpful feedback from my Australian publisher, Shane Strange (at Recent Work Press), and from the poets Paul Kane, Alex Lemon and Lachlan Brown. Receiving negative feedback is never easy, but it’s always essential.

Since I am now fortunate enough to have a tenure-track position teaching creative writing at a university, I’m actually expected to spend 40% of my work week working on my writing (yes, it’s in the job description!). So, I have a whole weekday devoted to writing, and several hours set aside on other days of the week. I write almost every day. My typical day begins with driving my daughter to school, then running seven miles. Breakfast, writing, teaching, etc. comes after the run.

I always turn to music and literature for inspiration. I don’t get stalled often, since I’m constantly reading and teaching poetry in my job as a creative writing professor, but when I need inspiration I like to put on an album by artists like Nick Cave, Van Morrison, Leonard Cohen, The Waterboys, Bob Dylan, U2, Tori Amos, Florence & The Machine, Of Monsters & Men and Hozier.

Eucalyptus. I keep a bottle of eucalyptus oil and have a sniff when homesickness strikes hard.

Music, for sure. I’ve been a massive music fan for more than thirty years and have always been drawn to songs with great lyrics. I have a really hard time enjoying music if the lyrics are shallow and cliched. I’m also influenced by visual art and love landscapes. I consider myself a poet of place and my poems are much more likely to be set in nature than an urban or suburban environment.

Visit Antarctica, spend more time in Iceland, and buy a cottage in Ireland.

When I was twelve, I wanted to follow in my grandfather’s footsteps and become a farmer, but he sold the farm and retired, so I had to find a new dream occupation. First it was architecture, then law. By the time I was in my second year of university I had decided to become an English professor, and I’ve been fortunate to spend most of my adult life in that job.

I can’t sing, draw, paint or play a musical instrument properly, so I pursued the only art form I was any good at. Seriously though, since my early teens I’ve had a need to write that is fundamental to my sense of self. I can’t imagine not writing.

Ilya Kaminsky’s Dancing in Odessa. I read Deaf Republic first, then went back to his previous collection – both are amazing. Parasite was the last great film I watched, closely followed by 1917. I wanted to love True History of the Kelly Gang, but I had all kinds of problems with the way it adapted Peter Carey’s novel and retold parts of the Kelly story.

I have three manuscripts in progress that I hope will each become a full-length collection – a collection of renga written with Australian poet Lachlan Brown, a collection of found poems based on letters by a historical figure, and a book-length poem about the boulevard I live on, partially inspired by Basil Bunting’s Briggflatts. I also continue to write individual poems that I will eventually gather into a collection.