Tsering Wangmo Dhompa, My rice tastes like the lake

It is not everyone’s desire to swim as a fish.
I have a little dog that behaves like a cat,
it is not his fault he cannot pass the discipline test.
A fault line runs through the city center
sullen as a stretch mark under a dress;
we believe our undoing comes from one source.
An escape plan is our solace. There are words,
there are stories we never tell. She said
on the radio, my rice tastes like the lake.
It was a perfect sentence. (“My rice tastes like the lake”) 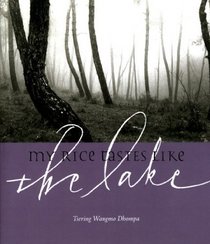 In San Francisco poet Tsering Wangmo Dhompa’s [see her 12 or 20 questions here] third trade poetry collection, My rice tastes like the lake (Berkeley CA: Apogee Press, 2011), following up her Rules of the House (2002) and In the Absent Everyday (2005), both also published by Apogee Press, she continues her lyric exploration of the space she inhabits between two cultures, two countries and the blended awareness she has created for herself, since.
Over the length and breadth of eight poem-sections, My rice tastes like the lake extends the lyric breath of each poem to its full, writing out a sequence of Tibetan landscapes that exist both without and within, across the surface of her years in the United States. In the poem “Exile,” she begins, writing: “From a distance, topography is intent / as in, Where I am from is no more. / Blood is not a natural conclusion / to kinship despite theories and experiments / where red prefaces emotion.” In the same section, a second poem on exile, “”Exile: an invitation to a struggle,” writes:

The distance is a question.
The question is also a statement
of a struggle.
If the word is a struggle,
you understand.

It reads as though to even name the difficulty is its own difficulty, writing her states of dislocation. In the thirteen-part poem “Selvage: for country,” she writes:

I am in the boat you built with a hole
in the starboard hull patched with remnants
of material found. It is raining. I do not think
I will sink today even as I remember
your prediction. You are not the same person.
You have not changed. And I am in the sinkable boat,
again. The cleats turn into themselves. Everywhere
is water. Why is it I am paddling on my own? To save
myself I am alone. They were always drinking
tea, the people of my past. They rarely shattered
cups or plates or replaced the thermos, emptied
before sleep. Every day they used their fingers
to measure salt and butter and time. I do not know
how to be like them. To keep from breaking
in small rooms where everything balances on hope.

My rice tastes like the lake writes as an examination of her daily life and immediate, writing out traces of what no longer exists, an exile from what can no longer be returned to. In the poem “Border,” she writes: “There is no irony / in how I think, except at work, where there is / a dismantling of text and I am many people / but never enough, for dissolution of cause and effect. / It is not without strife we are here. I speak for the gorilla / in the zoo who is photographed all day; he likes / cornflakes and ketchup.” It’s as though she is in the midst of exploring a perspective of exile that doesn’t automatically presume complete displacement or homelessness or a romantic attachment to what has been lost, but instead, explorations of the entirety of presences and absences and how they relate swirl throughout her poems. There is what is lost, and what remains, carried. This collection is rife with absences, and reoccurring silences. The thirteen-part poem “Catabolism” begins:

To solicit silence, not preceding or shadowing
a moment but subsequently memorialized as a sensation,
you would have to be static. Thinking back
is a term we use to preface regret. To carry
no contradictions we must build emptiness
as one stretches the body to win an eating contest.
My attempts to re-enact emotion rely
on the familiar. Within time, opinions
collude to become history. Within
time, rules apply to gestures. In years, how
will strangers read us when we walk by?

Silence is very much a Buddhist trait, and one that allows for deeper meaning, and Dhompa’s lines allow for much that isn’t there on the surface, unseen, silently included. Composed, in every meaning of the word.
Posted by rob mclennan at 9:01 AM
Labels: Apogee, Tsering Wangmo Dhompa

Tsering Wangmo Dhompa never ceases to amaze, book after book, it seems she has language for every wordless moment. She is my favorite poet.

I agree..amazing work as usual, Wangmo. Can't wait to get my hands on your latest work and get it autographed when you visit! Keep writing..dear friend...