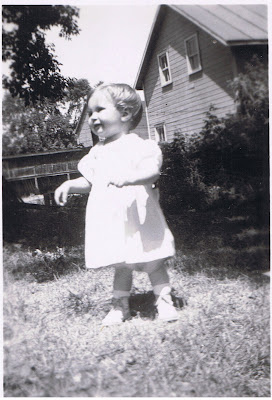 Michael Winter writes that death isn’t an event, but a process. The Death of Donna Whalen.

My mother died nearly two short months past her seventieth birthday, the night of August 19, 2010. These were milestones we hadn’t expected, although few might admit. Years her immune system battered, broken, shot to hell. After forty-three years of illness, her body wore down. She slipped so quick, there less a release than simply gone. Four days in the intensive care unit, Civic Hospital, her last three days on life support, unconscious, and medicated to deflect the pain of lung infections, arthritis, the pain of her failing kidney.

The fourth of George William Page and Della Marjorie Swain's seven children, she was their first born in hospital. Ironic, since she would spend so much of her life in hospitals. Weeks, or even months, at a time. Born at Ottawa’s former Grace on Wellington Street West, a building that stood, until relatively recently, in the Parkdale neighbourhood. Where I too arrived.

Burrowing into a Toronto housesit, I received an email from my sister’s cellphone: you need to come home, right now. I rode the Greyhound east, and called the farm once I landed in Ottawa. I asked my father, is it worth going in to see her, or waiting until tomorrow morning? It was already late. He couldn’t answer.

She’d already been in a coma for more than a day. Slipped.

A photograph among her possessions of a toddler, with the small scrawl on the back, “Joanne at 1, taking first steps.” What would have been June 30, 1941. Joanne Irene Page. The child who would grow up to become my mother. On the day this picture was taken, the infant who would become her husband was four days old.

Through photographs, we move at entirely different rates of speed. I feel my skin pulled at the contradictions of. I try to navigate, negotiate. I attempt to extricate.

My mother, rolling out through pictures I remember and some I’ve never known.

In the minutes before my mother died, my cousin Patti, leaning over mum’s bed in intensive care, telling me of my parents’ pre-wedding blood test, the one that gave her three months to two years to live. The news called Patti home, visiting an American cousin. Three months to two years, the result of babysitting a year or two earlier and catching scarlet fever from a neighbour girl, which started the process of calcifying her kidneys, eventually putting her through twenty-three years of dialysis and three transplants over the same period, the third of which happened only eight years before her body finally gave.

When someone close to us dies, we enter into a particular kind of dialogue, deep and rich and abstract. I imagine conversation. By her hospital bed before and after she died, or alone with her in the chapel before the wake began, whispering under my breath. Oh, mum. Just loud enough for her to hear.

We attach ourselves to a series of beginnings, rare endings. One door barricades, and a window latch opens. To live any differently would cause the body and heart to close down. It would be far too easy, too easy to fall from this point and succumb. There are always ways we could turn that we can never return from. Lines that can’t be uncrossed. The boy on the French side when we still in high school, a shotgun up to his lips in his mother’s bathtub.

Today, rereading a poem by Sandra Ridley, caught in the underpinning of her last two lines:

[see here for links to other sections]
Posted by rob mclennan at 9:01 AM
Labels: Michael Winter, mother, Sandra Ridley, The Last Good Year