I miss my beauty
in the field 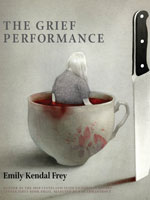 There seems something entirely appropriate about a quote by Pulitzer Prize-winning American poet Rae Armantrout on the back cover of poet Emily Kendal Frey’s first trade poetry collection, The Grief Performance (Cleveland OH: Cleveland State University Poetry Center, 2011), winner of the 2010 Cleveland State University Poetry Center First Book Prize, selected by Armantrout herself. Frey’s poems echo some of Armantrout’s short lines and short bursts in longer sequences, and work to negotiate light against the dark. Composed in three sections, the first two of shorter poems and the third of a longer sequence, “A Meditation on a Meditation of Frost,” Frey’s The Grief Performance is a celebration wrapped up in mourning, especially in the final six poems of the first section, all titled “The End.” “My mother / and her dead // sister are / watching me,” she writes in one of these, a short poem as longing, responding to a call, as she ends the short piece, “and I love / how they call // me flower / so I walk // closer / toward the light // that is them.” Frey’s poems are direct and open, meditational without falling into sentiment, writing out the important stages of grief. Isn’t grief, in any and all of its stages, an element of performance, even if just for an audience of the self?


Birds Are So Soft

Birds are so soft.
You can’t imagine.
If you rub them the right way—
gentle, not hard, they love it.
They get pin feathers.
New feathers that grow in plasticky sheaths.
You have to break them up with your fingers.
Fabulous. A head massage for the birds.
They coo, close their eyes,
and coo. You’ll see.
Another bird or human can do this
with a beak or fingernail.
Remove the sheath. It’s heavenly.
They’ll melt in your hand. You will see.
You’ll have a whole new set of sounds
you can make with your mouth.

This is a book about loss, and the appropriate grieving the body requires to move forward, and rarely has grief been written so well. The poems might skim dark places, and even burrow there, but one hopes the pessimism might be situational and not a more ongoing movement, as in this, the twenty-second of the twenty-nine sections of the sequence “A Meditation on a Meditation of Frost,” that reads:


After the funeral his mother and father
stood, swaying, in front
of the crowd, turquoise beads
pinching her throat.
They were temporarily reconciled.
My own mother next to me,
weeping for God knows what.