Call for Papers: Letters for Robert Kroetsch: A Special Issue on His Work and Influence

I wanted to become a postman
to deliver real words
to real people.

There was no one to receive
My application.
—Seed Catalogue, section 5 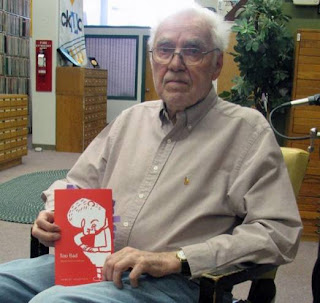 Robert Kroetsch (1927-2011) [photo from CKUA, "Robert Kroetsch Remembered"] had a resounding impact—wild and crazy and thoroughly Canadian prairie—as Armin Wiebe describes it. As co-founder of boundary 2 in the early 1970s he was influential in disseminating postmodern theory in North America and internationally. A prolific and funny theorist and critic, he became a major influence in Canada as he taught Creative Writing at the University of Manitoba at the same time as his own work was taught across the country. He combines a clear connection to his roots in Heisler, Alberta, with a life-affirming and intellectually challenging take on writing. Author of 9 novels, 14 volumes of poetry, and 7 books of non-fiction, Mr Canadian Postmodern has given us many lovely and treacherous words. We invite you to continue the play with word and place that he introduced to Canadian literature by submitting an essay on his work to Canadian Literature.

Submissions should be uploaded to Canadian Literature’s online submission system at http://canlitsubmit.ca by the deadline of September 1st, 2012.

Questions in advance of the deadline may be addressed to: can.lit@ubc.ca