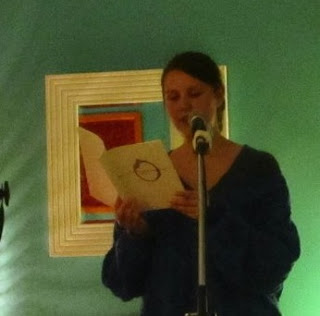 Leah Mol recently moved to Vancouver to complete a master's degree in creative writing. Her prose and poetry have been published by various Ottawa chapbook presses and literary magazines.

1 - How did your first chapbook change your life? How does your most recent work compare to your previous? How does it feel different?
My first chapbook was really important because it brought me into the writing community at Carleton University. It made me realize there actually are young people who care about writing, and that writing can actually be a career. Blemish was creative non-fiction, mainly about my experiences in high school, and reading it now always makes me feel like I was such a spoiled brat; I have a love/hate relationship with that chapbook.

2 - How did you come to poetry first, as opposed to, say, fiction or non-fiction?
I wrote a lot of poetry when I was younger, but in high school, I read Prozac Nation by Elizabeth Wurtzel and was so amazed that she could write about herself with such brutal honesty. I basically fell in love with creative non-fiction and have been writing prose ever since (with a little poetry thrown in here and there).

3 - How long does it take to start any particular writing project? Does your writing initially come quickly, or is it a slow process? Do first drafts appear looking close to their final shape, or does your work come out of copious notes?
I’m an extremely slow writer. I will have bouts of inspiration but they usually don’t last long. I also tend to edit as I write. Most of the time, once I finish a draft, it’s finished except for small changes (there’s always a comma that doesn’t quite fit).

4 - Where does fiction or a poem usually begin for you? Are you an author of short pieces that end up combining into a larger project, or are you working on a "book" from the very beginning?
I usually write short and disconnected pieces and then find ways to connect them. I’ve never thought of my own writing in terms of novel-length projects.

5 - Are public readings part of or counter to your creative process? Are you the sort of writer who enjoys doing readings?
Readings are very separate from writing for me. I enjoy doing them, partly because I like the attention, but I wouldn’t call them part of my creative process. I get something very different out of writing than I do out of performance.

6 - Do you have any theoretical concerns behind your writing? What kinds of questions are you trying to answer with your work? What do you even think the current questions are?
I like to question the boundaries between truth and fiction. I think truth in writing is very interesting, and everybody has a different opinion on what non-fiction actually is, so I like to see where those boundaries lie and how they change depending on the piece.

8 - Do you find the process of working with an outside editor difficult or essential (or both)?
I haven’t worked with many editors, so I can’t say too much, but I think it depends on the editor. I’ve always worked with editors who haven’t touched my writing much, and so it’s always been really easy. My last chapbook was with Apt. 9 Press in Ottawa, and Cameron Anstee was great to work with.

10 - How easy has it been for you to move between genres (poetry to prose)? What do you see as the appeal?
Personally, I like disjointed and disconnected prose, so although I don’t write poems very often, I do write some prose that people take as prose poetry. I think different genres have different strengths, and I find it really interesting to move between forms according to what the piece requires.

11 - What kind of writing routine do you tend to keep, or do you even have one? How does a typical day (for you) begin?
I don’t have much of a writing routine lately, although I tend to write much better in the mornings. Since I’m a master’s student right now, I have far too much free time and should really get into more of a routine. Let’s call it a New Years resolution.

12 - When your writing gets stalled, where do you turn or return for (for lack of a better word) inspiration?
I usually return to the same books that inspired me to write in the first place. Lately it’s been a lot of memoirs and Hubert Selby Jr. I’ve read the short story Tralala in Last Exit to Brooklyn about four times in the past week. I also try to read new things as much as possible; libraries come in handy.

13 - What fragrance reminds you of home?
Clean laundry and Christmas trees.

14 - David W. McFadden once said that books come from books, but are there any other forms that influence your work, whether nature, music, science or visual art?
I’m heavily influenced by music and film. Larry Clarke movies always make me wish I were more creative. I’m also very influenced by television, both great and horrible shows. I guess my biggest influence is characters and people, “It girls” like Edie Sedgwick and Marilyn Monroe. I just read Patti Smith’s book Just Kids and really wish I could have lived at the Chelsea Hotel in the 60s. I fall in love with desperate and lovely characters every day and am inspired by anything that pushes the boundaries.

15 - What other writers or writings are important for your work, or simply your life outside of your work? There are so so so many. I think the writers that are the most important to my work are those who’ve continued to influence me over many years. Since my childhood, I’d say Lewis Carroll, Roald Dahl, Robert Cormier, Chris Van Allsburg. Since high school, Stephen King, Irvine Welsh, Hunter S. Thompson, Bukowski, James Frey, Elizabeth Wurtzel, Bret Easton Ellis. In the last few years, Kurt Vonnegut, Heather O’Neill, William Burroughs, Jonathan Safran Foer, Hubert Selby Jr.

16 - What would you like to do that you haven't yet done?
Everything. But just generally, I’d like to stop being such a worrier.

17 - If you could pick any other occupation to attempt, what would it be? Or, alternately, what do you think you would have ended up doing had you not been a writer?
There are so many things I would love to do. I would love an infinite number of lives just so I could try absolutely everything. I think it’s a shame we only get to choose one. I’ve always wanted to go to medical school or law school, but at this point, I think I’ve officially chosen writing. When it came to choosing a university out of high school, I chose journalism instead of music, so if I hadn’t chosen journalism, I’d probably be doing something with music right now.

18 - What made you write, as opposed to doing something else?
I’ve never gotten bored of writing. And I like seeing my writing in print.

20 - What are you currently working on?
Right now, I’m mainly working on short fiction. I’m doing a lot of experimenting with dialogue, since dialogue is something I’ve used very little in the past and I’d like to make more use of it.