this interview was conducted over email in June 2021 as part of a project to document literary publishing. see my bibliography-in-progress of Canadian literary publications, past and present here

Lillian Nećakov is the author of six books of poetry, numerous chapbooks, broadsides and leaflets. Her new book il virus was published in April 2021 by Anvil Press (A Feed Dog Book). In 2016, her chapbook The Lake Contains an Emergency Room was shortlisted for bpNichol chapbook award. During the 1980s she ran a micro press called “The Surrealist Poets Gardening Assoc.” and sold her books on Toronto’s Yonge Street. She ran the Boneshaker Reading series in Toronto from 2010-2020. 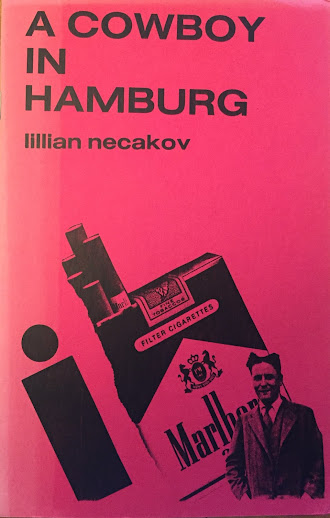 Q: How did the Surrealist Poets Gardening Assoc. first begin?

A: I blame Stuart Ross! I started SPGA in 1984 at our kitchen table at 42 Maitland Street. Stuart and I were living together at the time, he had already started Proper Tales Press and was selling his books on Yonge Street.

We were part of a circle of writers that included small press publishers, Gesture Press [Nicholas Power], The Front Press [Jim Smith] and Curvd H&z [jwcurry]. I was buoyed by their enthusiasm and dedication. It was a really exciting and creative period of my life.

It was relatively cheap and easy to make books and send them out into the world. The whole process was completely hands on and I loved everything about it. I had already been writing and creating collage for a few years and this seemed to be a logical extension of that. There were many nights spent at that kitchen table on Maitland Street, collating, stapling, chewing the fat and dreaming up new projects.

Q: Where did the name Surrealist Poets Gardening Assoc. come from?

A: Again, I blame Stuart! I think it was 1979, Stuart had a package delivered to me (from the Italian Neo-Dada artist Cavellini), it was addressed “Lillian Necakov, Surrealist Poets Gardening Assoc.” Later, when I was thinking of starting my own small press, I thought that would be the perfect name. It proved to be a whole heap of fun too. I used to get mail from various horticultural groups and gardening societies, inviting me to conferences and retreats. I really don’t know what they thought I was growing! Bet, they didn’t think it was poetry! 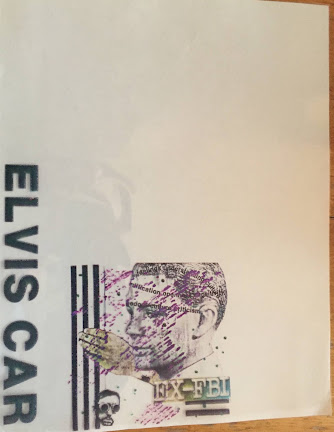 Q: How were the first publications put together? Were you soliciting work, or did you put out a call? How was work gathered?

A: Mostly, I solicited work from writers and artists who I knew or knew of and whose work I admired. Remember, these were the pre-internet days. There were no cell phones, no email, everything was done in-person, by word of mouth or through post. l solicited work for Elvis Car (the collage magazine) from artists like Cavellini, who lived in Italy and Steve Byram, who lives in the U.S. Those queries had to be sent by post, and it took a while. It was a labor of love.

Q: What were the print runs for these publications? How were they distributed, and what kind of responses were you receiving?

A: Print runs were anywhere from 100-300 maximum, depending on the publication and materials used. For example, The Schwarzenegger Poems by Jim Smith had a clear acetate cover, so that was a bit more expensive to produce, that book had a print run of 200.

The publications were distributed on a local community level, at readings, get togethers, word of mouth and through Charlie Huisken and Dan Bazuin’s incredible independent bookstore This Ain’t the Rosedale Library. Charlie and Dan were great supporters of small press and local writers and artists. 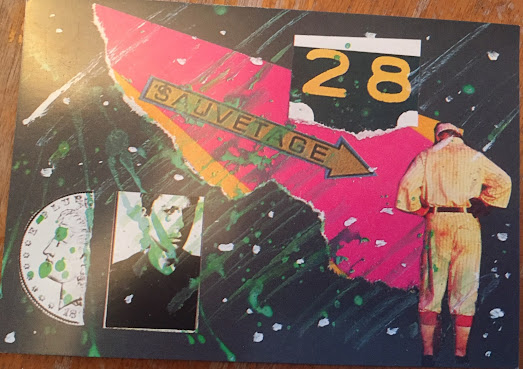 For a while I joined fellow writers Crad Kilodney, Stuart Ross, Mark Laba, and Michael Boyce and sold my own books on Yonge Street. It was a great way to get books into the hands of people who didn’t read poetry or who didn’t have access to the world of small press. But it could also be crazy dangerous and weird. There certainly were moments.... 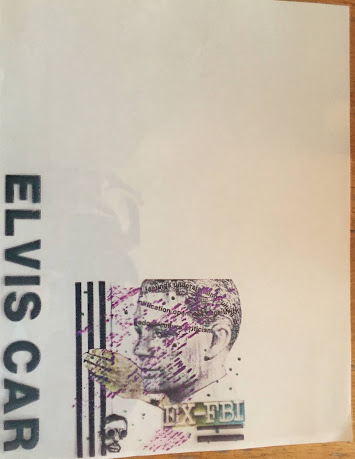 And of course, there was the Toronto Small Press Book Fair, which was co-founded by Nicholas Power and Stuart Ross in 1987. That was the mecca of small press, a great place to buy and sell books, meet writers, artists, readers and spend all your money. That was the place I really got feedback from people about SPGA and it was really positive. I sold a bunch of books and magazines and people seemed genuinely excited about the press and the writers and artists I was publishing.

Q: How did the collage journal Elvis Car originate?

A: I have been creating collage since I was a young teen, always loved it. Some early influences include Hannah Höch, Kurt Schwitters and Raoul Hausmann.

When I started the Surrealist Poets Gardening Assoc. in 1984, there were no small press publications dedicated solely to collage (in Toronto) that I knew of. I wanted to create a space for collage artists to showcase their work. I wish I had had the means to produce the magazine in full colour, and I regret not producing more issues.

Q: What held you back from producing more?

A: Honestly, I didn’t think that producing the magazine in black and white did the work justice. The original collages were so much more rich and nuanced and I wasn't happy with the outcome in black and white. Producing a full colour magazine, back then, was just too expensive.

Elvis Car no. 113 was produced in full colour, but I was only able to put out 25 copies of that issue and it was physically much smaller than the first issue (1/4 the size). It just wasn’t sustainable. 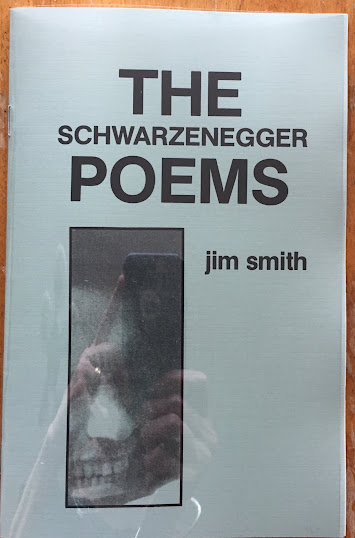 Q: Is this why you began moving into producing chapbooks?

A: Mostly, yes. I was still really excited about publishing and putting out books. I find so much pleasure in making things. Those early chapbooks were typeset, then the copy was pasted down on paper, assembled into a “mock” book, then taken to the copy shop. After that, you had to assemble each copy of the book, fold and staple each one and then you had your finished chapbook. I mean, you know how much goes into producing chapbooks. I loved the entire process from start to finish.

Q: How were those first titles received? What did you learn through the process of book-making, and becoming both published author and publisher?

A: Within the small press community, the books were really well received. They were affordable, alternative, collectable, a welcome change from mainstream publishing. For those very same reasons, people outside of the small press literary community didn’t know what to make of these chapbooks. I was often told, “but, that's not a real book”. It didn’t fit into their concept of what books were supposed to look or feel like, these were not the kinds of books they were used to seeing at their local Coles bookstore. I would say, “but they are real books, they even have an ISBN and everything”, at that point they would shut up because they had no idea what that meant.

I quickly learned that my love of writing and making books was completely separate from distribution. It was easy – well relatively easy – to write and be a small press publisher, but when it came to getting books to the “masses”, that was another story. It seems that only poets read poetry. It was nearly impossible to get the books reviewed outside of a few small press magazines.

Q: Did taking control of production shift the ways in which you saw your own work?

A: Not so much the way I saw my work, rather the opportunities I saw. If SPGA and other small press publishers were willing to take risks, my writing could find a place outside the mainstream. I have always written against the confines of the audience, I never think about what will appeal to the reader or the publisher when writing. I go off on all kinds of tangents, I have fun, I write first and foremost for myself. Maybe that’s selfish or arrogant, I don’t know, I just know that I have to be as honest and authentic as possible.

Q: Given the occasional aspect of the press, how did titles emerge? Were you approaching writers, or were they approaching you?

A: I approached writers.

Q: I get the sense from your bibliography that the press ran on a case-by-case basis, focusing on and producing one item at a time, with often months or even years in-between. What prompts you to approach someone for a manuscript?

A: What prompted me to approach writers for manuscripts was always their work. If I connected to the writing and was excited about publishing it, I would go for it. To be clear, SPGA hasn’t been publishing for quite some time now.

There were major changes in my personal life in 1989 and I was out of the loop, so to speak, for several years after that. I was focusing my energies on other things, and then, I decided to focus on my own writing. So the last book SPGA published was Richard Huttel’s The Be Seeing You Variations in 1993.

I sometimes think about resurrecting the press, but I think there is a time and place for everything. I think I might just stick to being a surrealist poet who gardens. 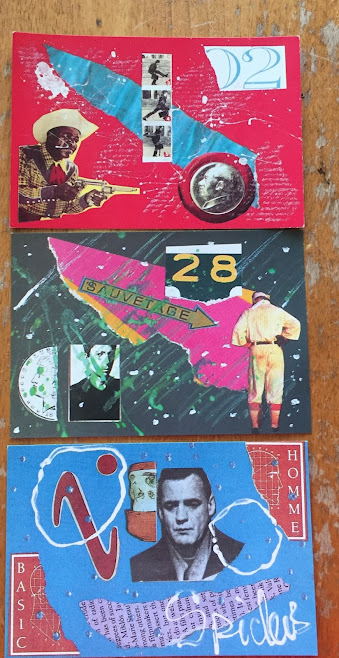 Lillian Nećakov, A Cowboy in Hamburg. 1985

Richard Huttel, The Be Seeing You Variations. 1993.