George Bowering, Could Be

You’d think they’d learn a lesson from Icarus,
or at least the part of him they could see if
they’d only look, but no, one guy lets his sheep
walk on stone all the way down to the water,
where there’s nothing to graze. And I can’t help but
wonder what he’s looking at up in the sky, while
another guy sits on the slippery stone, leaning
into the air far above the disturbed water.
The guy at the dead centre whacks his horse
while plowing around a dead sheep or maybe
female Martian visitor probably fallen from
above the sun. They all could have taken a tip
from any father who said pay attention, any
odd and even peculiar poet, any such artist
could see those woolly critters will be lamb-
burgers, any Billy’s going to tell you, look out,
at least apply some sun screen, the sea is also
a labyrinth. 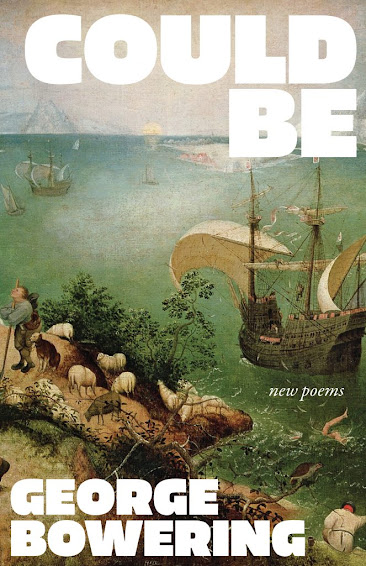 The latest collection of new poems by Vancouver writer George Bowering is Could Be (Vancouver BC: New Star Books, 2021), a collection of short lyrics that follow a lineage of other collections of short lyrics he’s published over the past few years, including his dos-à -dos flip book Some End/West Broadway (with George Stanley; Vancouver BC: New Star Books, 2018) [see my review of such here], The World, I Guess (New Star, 2015) and Teeth: Poems 2006-2011 (Toronto ON: Mansfield Press, 2013) [see my review of such here]. While the projects themselves haven’t diminished, whether in number, size or scope, over the past twenty years—recent other titles of his include the non-fiction titles Soft Zipper (New Star, 2021) [see my review of such here] and Writing and Reading (New Star, 2019), the novel No One (Toronto ON: ECW Press, 2018) and short story collection Ten Women (Vancouver BC: Anvil Press, 2015)—his poems seem to have evolved from the multitudinous book-length project to these more recent collections akin to bundles of poems that interact in less obvious ways. Arguably, his first few decades of published poetry collections existed in vast contrast to the assemblages of short lyrics that other poets were publishing around the same time, as Bowering favoured the serial, even book-length poem. These days, it would seem, Bowering composes poems that bundle together to form books, each composed through a sequence of grouped threads, each of which run back through different elements of the length and the breadth of his publishing history.

To get a sense of some of his earlier structural concerns, one could easily point to a recent volume such as Taking Measures: Selected Serial Poems by George Bowering, edited by Stephen Collis (Vancouver BC: Talonbooks, 2019) [see my review of such here]. It is as though as Bowering continues to produce work, some six decades after the appearance of his first collection, the ways in which he assembles poetry collections, although no less complex, have become far more nuanced. The poems connect through quieter means. Just listen to the soft ease of the opening two sentences of the poem “Basura”: “I’m so happy just to be with her’s / a phrase been going around in my head / where the mortality has set up shop, / probably, I don’t know, a normal eventuality, / but when she’s far away from me, I’m awfully / blue. The way blue used to mean, awfully / blue, like a roadside someone threw / basura into, a ditch used up stuff ends down in, / used up being the way old writers / are made to feel.” There is an awful lot going on in those two sentences, stretching out across the first third of this single-stanza poem, but in a way that unfolds smoothly and slowly, his sudden turns appearing as naturally as water or breath. The same emerges through his lyric on Bobbie Louise Hawkins, extending an occasional series of prose lyrics for other writers he’s been including in poetry books for decades now, that ends: “She was older than me and younger than my mother and / reminded me that part of my blood got here from some / mountains in the Ozarks, secret home of awful wisdom. / She came all the way here to help us lose the idea that / beautiful women were the artist’s wife, learn to understand / their precious hands that were sometimes fists.”

This is the natural hope and progression for any writer still on their game, one might say, but not everyone manages to still produce engaged and engaging work so far into the process. Has George Bowering produced more than one hundred full-length books by now? Most likely, I would think, and anyone with even a fraction of that kind of back catalogue would be lucky to be still working at this level of complex ease.

It’s what we all want, our words
to live longer than we do, yet
we would envy them
that they go on to see things we
never will.

Unless—
no, we would diminish
were we to watch over them
all through the stages of
their lives.

There is an elegance to these poems, even through working a number of his familiar touchstones, whether baseball, Brueghel, history, puns and rhymes, Vancouver and foreign travel with his dear wife, Jean. Towards the end of the collection sits the longer (comparatively) poem “Sitting in Jalisco,” a travel poem that harkens back to numerous of his works over the years, beginning with that infamous small volume Sitting in Mexico (Montreal QC: Imago / Beaver Kosmos Folio, 1970). “What a terrible green the umbrellas are,” he writes, “the sea / another green, my chance of seeing it was / eight percent, and we are so glad we didn’t know.” His travel poems, too, exist as poems of attention, still harkening back to an era that was rife with same, but refusing to fall too deeply into tourist over, simply, the self in a locale that doesn’t allow him to be distracted by the usual day-to-day. “Chapo is plotting his third escape, / David Bowie died last night; the news is so bad / and reaches to the dusty corner of nowhere on the / sea, it reaches inside your light clothing, it turns / that nearby accordion sad, it ends in a song / whose end is the worst word for a corazón.”

These are poems of attention, looking simultaneously, it would seem, in every direction; lyric meditations with the usual Bowering attention to cadence, allowing the rhythms to flow across and down the page. His poems over the past few collections have grown quieter; no less sharp, but attentive to the progress of age and attention. In an interview Rob Taylor conducted with Bowering and Stanley on their combined collection for Read Local BC, posted April 16, 2019, Bowering speaks of, among other things, poetry, aging and his infamous near-death experience in 2015:

For those looking on, mainly my dear Jean, it could have been a question of the end by death or the end of writing by brain damage. Well, it is true that a lot of my poems since that time have been written while thinking of mortality, and at my age you think of dying a lot of the time. But as to the important effect—there hasn’t been a substantial change in the way I write poems. I was reading my 2018 poems yesterday, and I thought they were getting better and better, if that is not immodest. But if it is true, that is not because of what I have been writing about. I didn’t have a heart attack, despite what one of those posters said—I had a cardiac arrest, which means STOP. I was very aware of my rare luck. But I did not hurry to the desk with particular intent. Often I get asked questions that enquire about what I wanted to say. But I write what the muse tells me to write.