as if this building is a
as if my to you

stuck in loops of these alienated trajectories
capital flows in waves, too

and maybe
this moment gradually becomes

something to look forward to
a felt configuration of

the sidewalk, the road, other buildings
carefully planted trees

dislodged history or
vectors of colony

a pulsing in my head of
abnormal materialities (“LOG III”) 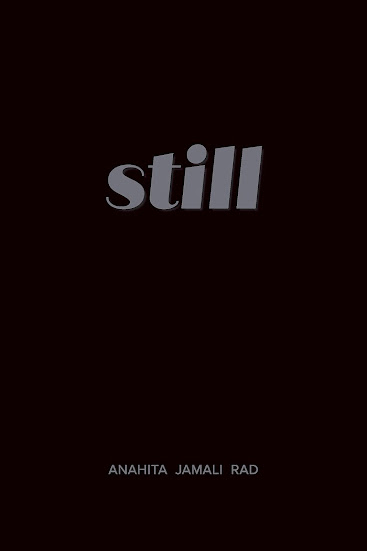 I’m fascinated by the expansions of the first-person lyric as displayed through Montreal poet and editor Anahita Jamali Rad’s second full-length poetry title, still (Vancouver BC: Talonbooks, 2021), following their debut, For Love And Autonomy (Talonbooks, 2016) [see my review of such here]. still explores an abstract and a light touch, sketching out reports on perception, writing, absence and inquiry, as the poem “LOG V” begins: “I waited so this day could pass / as if time itself // could determine / action // days that passed before / pass again, unfolding // dimensions of imagining // and still I / position my position // peripheral to the object [.]” still is a sequence of simultaneous calm and howevers, of wavering presence and time, and of logic, all of which operates on a deliberately-shifting foundation.

The irony of still, of course, is that their poems are perpetually in-motion. “when there’s nothing left / in this,” Rad writes, as part of the poem “NEW CODES OF EXPOSURE,” “our abandon // our inward- / looking silence // clears nothing / and is simply // a hesitant wandering / a tiredness of talking or / unwillingness to speak // this word-filled space seeks / its own absence [.]”

“Every new moment comes at the expense              of other / possibilities,” they write, as part of the sequence “OVERFLOW POTENTIAL.” still is an examination of silence and being, writing slant across both ruin and possibility. There is such presence captured here; such possibility.

The body disorients itself, free and open, finally, reaches out to the edges of the previously untouched. The body extends its limbs to the wall to catch itself, adds value to the wall. Here, the body reaches to touch the edges of what can be deemed profitable. The disoriented body builds a radically different technological age, decentres its points of departure. Throws the world up, intimately scales up and replaces by reputation systems. The disoriented body makes what was at once invisible to capital reappear, building markets out of the evasion of every barricade, the far reaches, the extremities that hold the structures of relation.

The disoriented body slips proximity, does not hold in place, threatens the alignment of space and relations. Is not simply directed toward a life worth living or a life that makes a living. Is topsy-turvy, not following direction, puts to use, builds an imaginary, finds a solution, fills the gaps, severs the relations, is only supplemental, does not deliver on promises, evades responsibility. And yet, is still within the bounds of capital.