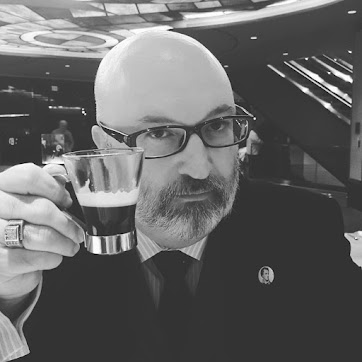 Gregory Crosby is the author of Walking Away from Explosions in Slow Motion and Said No One Ever, and the chapbooks Spooky Action at a Distance and The Book of Thirteen. His poetry has appeared in numerous journals, including Court Green, Epiphany, Copper Nickel, Leveler, Sink Review, Ping Pong, and Hyperallergic. In 2002, as a poetry consultant to the City of Las Vegas, he was instrumental in the creation of the Lewis Avenue Poets Bridge, a public art project in downtown Las Vegas. His dedicatory poem for the project, “The Long Shot,” was subsequently reproduced in bronze and installed in the park, and was included in the 2008 anthology Literary Nevada: Writings from the Silver State (University of Nevada Press). He is an Adjunct Assistant Professor at the John Jay College of Criminal Justice and teaches creative writing in the College Now program at Lehman College, City University of New York.

My mother died six weeks before my first book was published so… That’s a change that’s difficult to put into words. My most recent work would, I hope, compare favorably to my previous work, but that’s not for me to judge; it doesn’t feel particularly different in form so much as content, as the last four years have washed over everything I write and seeped into all the cracks.

I am a failed fiction writer. For a long time, I was a freelance writer and critic; the grind of reviewing and producing features left no stamina for sustained prose writing, but a poem could appear in my mind and tumble out onto the page and be very close to a final draft in an hour or two. After a time, there were many, many poems and very few short stories, so I succumbed to the inevitable.

It depends upon the project, though I don’t really think in terms of projects (most things conceived as “projects” sit, forlorn and wistful, in neglected Word docs). Poems come quickly, and are usually very close to their final shape—I’m a “first draft” writer in general.

A poem begins with a line. Or a title. And I’m always working on a “book,” somehow, whatever I’m writing.

I enjoy doing readings because I think of them less as readings and more as performances. I will say that doing a reading over Zoom is, like most things, death by a thousand pixels.

I’m more interested in better (or at least more intriguing) questions than in answers.

The role of the writer is 1) to write and 2) whatever that writer defines, for themselves, as their role should be. Although whenever I come across this question, I think of Hawthorne: “The ends of literature are, first, the pleasurable toil of writing; second, the gratification of one's family and friends; and, lastly, the solid cash.” (I suppose two out of three’s not bad.)

Depends upon the editor. (Having been an editor myself, I am cursed with Strong Opinions about my own work.)

I find it very easy; so easy that I tend these days to stick to poetry. I mostly gave up criticism when I realized that while I enjoyed thinking and writing about art, and rendering judgments about it, I no longer cared about winning arguments. I think a true critic cares deeply about winning arguments (or at the very least putting forth arguments that extend the discourse). When I write critical prose now it’s usually just to express my love (and mystification) about a work of art (usually a film).

I keep no routine beyond constant reading and constant openness. I’ve found I accomplish more by simply setting loose goals (write about that this week) than following a strict structure (stop looking at Twitter, you haven’t done your hour today).

I no longer get stalled; if something’s not ready, I stop writing and turn my attention to one of my many obscure obsessions, knowing that whatever I’m waiting for will eventually return (if only I’d known this in my twenties…). I do occasionally, in moments of despair, have to remind myself what an artist’s life is—for that, I usually dip into Werner Herzog’s Guide for the Perplexed.

The petrichor of the Mojave Desert.

Too many to recount. But John Berryman’s Dream Songs “saved my life” once, and Anne Carson showed me I could do anything at all in poetry. Also important: Camus, Arendt, William James, James Baldwin, and Beckett, always Beckett.

Write a finished novel. I wrote a pulpish potboiler years ago and abandoned it four chapters before the end.

I could have very easily been an actor, a director, a cartoonist, a librarian. What I really should have been is a conceptual artist; what I wish I could be, if I had any ability whatsoever, is a musician; what I might become, if I had an ounce of discipline, is a magician.

As of last Sunday, John Le Carré’s Tinker, Tailor, Soldier, Spy. The last great film I saw in a theater (alas) was Portrait of a Lady on Fire; the film I watched during this past pandemic year that most stays with me is The Vast of Night.

Sadly, inevitably, a manuscript that, so far, is a combination of poetry and prose about the pandemic (I know, I know).