Further to our time away in Picton, I went through recent short story collections by American writers J. Robert Lennon and Joy Williams. All the adults were two weeks-plus beyond double vaccination (and seeing anyone else, obviously), and everyone was super careful. The children spent the week in the pool. 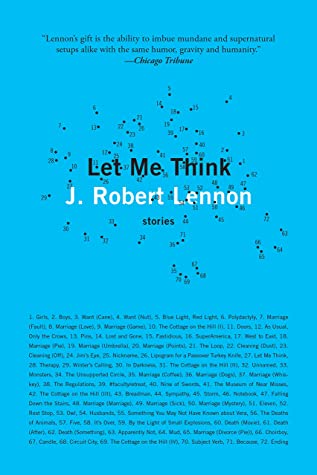 I’ve previously only read one book by New York State fiction writer J. Robert Lennon: his short story collection Pieces for the Left Hand (Graywolf Press, 2005), and recently read through his Let Me Think (Graywolf Press, 2021). Whereas Pieces for the Left Hand was made up of one hundred very short stories organized into thematic section-groupings, the stories in Let Me Think are assembled via multiple shapes and sizes, from the short burst to the longer narrative. Lennon’s stories explore odd, small moments that can’t easily be explained, like droplets of magic sprinkled in to shift the narrative. His stories explore how certain experiences or interactions shift perception, from the repetition of a single day into infinity, the experience of a painful divorce or the seemingly-simple matter of sweeping up dust. As he writes to end the flash story “Unnamed”: “The road has no name. This is the commonest name in the world for a road.”

The stories in Pieces for the Left Hand were structural echoes of each other, offering twists and unexpected turns of perception, something that collection shares with this one, albeit through an equal exploration of form: a story might be propelled almost entirely by dialogue, for example, while another is composed closer to a flash, or even a prose poem. Listen to the story “Monsters,” that reads:

The blind man, who everyone agreed was exceedingly handsome and who had married a woman widely regarded, among their acquaintances, as extraordinarily beautiful, was chosen to participate in the trial of a new medical procedure that doctors  believed might fully restore sight to certain patients. The surgery was a complete success, but when the handsome man saw, for the first time, his own face and the face of his wife, he was horrified, and could not be dissuaded of the notion that they, and everyone around them, were hideous monsters; and when, six months later, the procedure’s efficacy unexpectedly faded, and the handsome man was plunged again into darkness, he said that he was not, as his friends might have predicted, relieved, but rather more horrified still, because now, and forevermore, he could not know with any certainty where the monsters were. 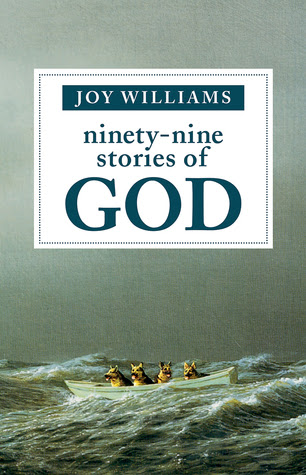 American fiction writer Joy Williams is someone I only discovered recently, thanks to catching a tweet (and subsequent recommendation) by Denver poet and essayist Elisa Gabbert. After moving through Williams’ extensive catalogue, I decided to pick up a copy of her short story collection, 99 Stories of God (Tin House Books, 2016). An assemblage of ninety-nine short, self-contained stories, each story is numbered, with their titles only set at the end. There are echoes of Milan Kundera through Williams’ prose, moving easily from big ideas to specific actions and ideas. The twenty-ninth story, “IGNORANCE,” writes of a man on the beach, rescued from the water by a pig: “Would the pig have rescued the man if she had known that he and his companion had just enjoyed a picnic of ham sandwiches?” With the response: “The pig’s owner replied that pigs are intelligent, more intelligent than dogs, but they are not omniscient.”

What is fascinating through this collection is how it is the framing that allows for these seemingly untethered and unconnected pieces their book-length shape and anchor. Hers are short bursts that suggest more than they say, and hold far more than they might easily let on; indirectly, and even directly, these are stories about and around God, even utilizing God as a character, moving around the earth, interacting with others in curious and even mundane ways. Should he adopt a tortoise? At another point, he answers questions for the wolves. These are stories that refuse to provide easy answers, instead offering openings of thought; offering, instead, a way through which to contemplate ideas. Offered as story number thirty-nine, titled “BURIED IN COLORADO ALL ALONE,” she writes:

The girl from the pharmacy who delivered Darvon to Philip K. Dick, the science fiction writer, wore a gold fish necklace.
“What does that mean?” asked Dick.
She touched it and said, “This is a sign worn by the early Christians so that they would recognize one another.”
“In that instant,” Dick writes, “I suddenly experienced anamnesis, a Greek word meaning, literally, loss of forgetfulness.”
Anamnesis is brought on by the action of the Holy Spirit. The person remembers his true identity throughout all his lives. The person recognizes the world for what it is—his own prior thought formations—and this generates the flash. He now knows where he is.