I wonder if the north was the repository of his best
intentions. He left when I was an infant.
Powerless over drink, he ran, jumped the track
and erased himself from public record.
He became a shadow I couldn’t match.
Every Native man on the street, the unidentified
dead in government databases; I searched
their faces to see if they were a part of me.
Would-be astronomer in his youth, I’d learn
also to try and cast my gaze upwards.
When I look at the Pleiades I see seven sisters
who could hold me. in Anishinaabe cosmology
the constellation is known as Bagone’giizhig.
The-Hole-in-the-Sky.
A portal between this world and spirit.
Where I go when I dream
and, if anywhere, the place
I’ll find him again. (“LETTER FROM HALIFAX”) 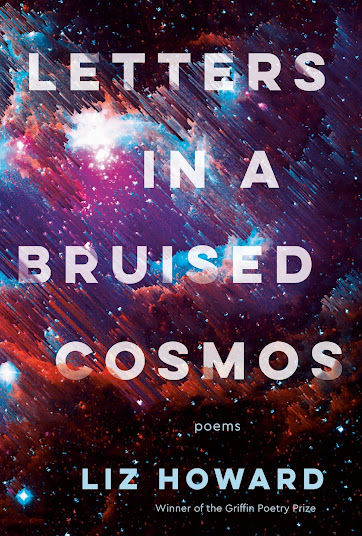 A follow-up to her Griffin Poetry Prize-winning debut, Infinite Citizen of the Shaking Tent (Toronto ON: McClelland and Stewart, 2015) [see my review of such here] is Toronto poet Liz Howard’s second poetry collection, Letters in a Bruised Cosmos (McClelland and Stewart, 2021). The poems of Letters in a Bruised Cosmos are formed and shaped out of lyric narratives, bursts of trauma, recollection and meditation, constructed as an assemblage of fragments that pool together to form a singular work. Her poems unpack, resolve and document the ways in which she attempts to reconcile the facts of a father who abandoned her. It is only as an adult that she finally catches up to him, mere days away before he died. As she writes, further, in the suite “LETTER FROM HALIFAX”: “Two days I have been / in Halifax. Two days since my father has passed / from mystery into appearance, laying bare / his totality on a death bed, distended cirrhotic belly / and ethereally beautiful face.”

Letters in a Bruised Cosmos is framed with references to cosmological knowledge, from the ‘cosmic bruise’ theorized as “caused by the collision of a parallel universe early in our universe’s formation,” through life cycles, brain research and climate anxiety. There is an urgency to these pieces, and an emotional rawness articulated through a clarity that only emerges through both a clear thinking and a fine craft. Packed with turns and twists of language, her writing is incredibly dense. “Then I’m awake in the garage with my firstborn thought.” she writes, as part of the tightly-wound “I DREAM IN GMAIL.” “A thought that sublimates into a braid of snowflakes. / What could offer me an office in the February pension: / a warmth that only makes its way into the deepest / pockets. A novice love that can’t help but become / a flight risk.” Her poems provide anxiety a shape, and even a calm, through turmoil.

Letters in a Bruised Cosmos presents itself as reportage, composed mid-way through an open-ended study around grief, identity and the cosmos, showing neither the beginnings nor the final results. Howard seeks to understand the world, herself and her place, seeking as much safety in herself and a better understanding her own identity. It is as though, through Howard, poetry is the form through which one can best navigate a comprehension of all things, from one’s own personal history to the structures of the universe. Despite any upheavals through her past, Howard is a poet with a confident and considered foot pounding down against the foundations, not only seeking but demanding ground. “History is a sewing motion / along a thin membrane.” she writes, as part of the poem “BRAIN MAPPING.” A few lines further down, in the same poem, ending that particular section: “Can I still learn / to feel protected / by what encloses me?”

Posted by rob mclennan at 8:31 AM
Labels: Liz Howard, McClelland and Stewart