Reality appears within itself:
a bunny turns to expose a growth
irregular as an asteroid with a faint pulse

Exiting a space formerly occupied
by her right eye, there are sciences
that claim to be natural though nothing is 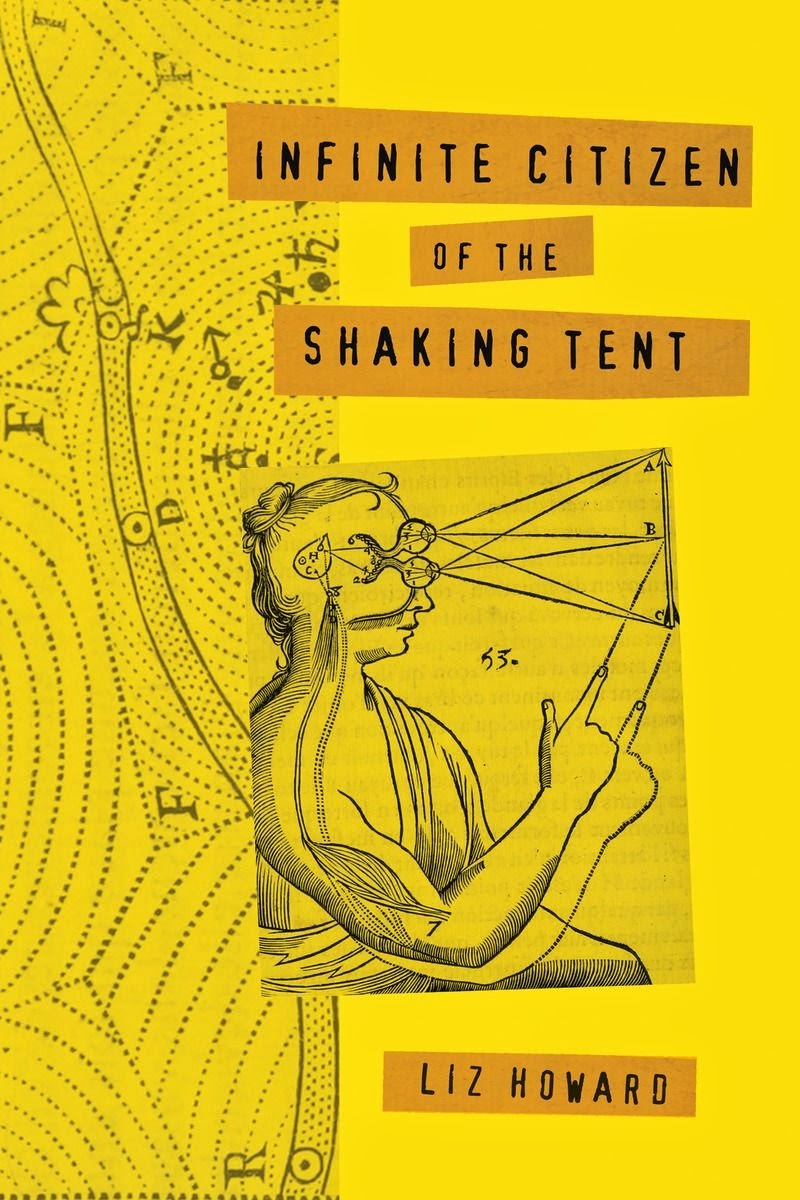 Toronto poet and AvantGarden Reading Series co-host/organizer Liz Howard’s long-awaited first poetry collection is Infinite Citizen of the Shaking Tent (Toronto ON: McClelland and Stewart, 2015), a “wild, scintillating debut” that includes her bpNichol Chapbook Award-shortlisted Skullambient (Toronto ON: Ferno House, 2011). Infinite Citizen of the Shaking Tent is a collection of powerful and deeply personal lyrics composed out of a richly textured language, one that revels in sound and collision, comparable to the work of her mentor, Toronto poet Margaret Christakos. Pulsing and gymnastic, her poems work to examine and articulate a variety of cultural collisions—including gender, aboriginal culture and environmental concerns—much of which is set in and centred around her home country of Northern Ontario: “Spent shale, thigh haptic fisher, roe, river / delta of sleep-induced peptides abet our tent / in a deep time course, in Venus retrograde // we coalesced into the Cartesian floral pattern / of heritage where I hunt along a creek as / you pack bits of bone away within a system” (“Terra Nova, Terraformed”). The poems hum and thrum and sing, resonating against a backdrop of refusal, decay, stone and totems, Canadian Shield, thieves and “a system of rivers.” “[T]he account of a body in trouble could be / so beautiful,” she writes, in the poem “Epilogue.”

Every Human Heart is Human

Ministry of the shaking dress
I could call this
a streamlet a better
coordinate, simply

I, Minnehaha, a small LOL
fiction antecedent
to quarry a nation

I gave you this name then said
Erase it

Structured in four sections—“Hyberboreal,” “Of Hereafter Song,” “Skullambient” and “Hyperboreal”—the poems speak of Anishnaabe culture, western philosophers, and the desecration of nature. As she writes in the poem “Foramen Magnum”: “what else is a river but the promise of a text [.]” She describes the collection in a recent interview over at Jacket2:

Infinite Citizen of the Shaking Tent is a text that has taken the entirety of one meagre lifetime to write, what book hasn’t? It is an extensive rewriting of the thesis that awarded me the tenuous title of Master and an edited revisitation of earlier work. It is a book, a unit, although it appears to be composed of individual poems, evidenced by unique titles, I intend for it to be experienced as a cohesive work. There is generous crosstalk between “poems,” recombination, ideas/words/phrases coming back from the death bed of prior reading. This is intended to highlight the phenomenological aspect of reading; it is so multiple. Delicately, the reader has an exquisite charge to answer: what is the nature of this cross-contamination? Here, this here where all are invited, contains the urban, the boreal forest, Descartes, Wittgenstein, Plath, Stein, Keats, Anishnaabe cosmology, lumberjacks, punk rock, autobiography, the tension between unintelligiblity and TMI, poverty and science. It’s a party, a séance, a powwow, a wake. It is the most earnest and joyful thing I have ever done.

Her poems are rage and force and declaration, and even reclamation, pushing back against the breakdowns of family, culture, ecology and the individual, written out of a fierce optimism and refusal to back down. As she includes in her “Notes” at the end of the collection:

Henry Wadsworth Longfellows 1855 epic The Song of Hiawatha appropriated and confused Anishinaabe history and mythology and inserted/naturalized a colonial presence within Anishinaabe cosmology. It is a textual assimilation of Indigenous rhythmic oration into a bombastic trochaic tetrameter, itself borrowed from the Finnish national epic Kalevala. Minnehaha, a creation of Longfellow, was the spouse of Hiawatha, whose death set the stage for the reception of settler influence later in the poem. “OF HEREAFTER SONG” is something of a translational détournement of The Song of Hiawatha, an intertextual recombination, filtered through the sited embodiment of myself and subsequent readerly selves; it engages the systemic tentacles of assimilation as they unfurl within and possibly enclose the contemporary New World. I am both settler and Indigenous, the text may contain the sweet horrors of my diary, a girlish self-narrative that arose from the once-irreconcilable. Language is also thrifted from ecological reports on the Lake Superior region, in which the original text is set, and sociological reports regarding the injustices lived by many Indigenous women, men, and two-spirit persons. These injustices are an inevitable extension of the ideologies inscribed in Longfellow’s poem. “OF HERE” is a linguistic performance that seeks to display/acknowledge its own implication in the effects of assimilation while simultaneously revealing those ideologies that underpin the assimilative program as it operates to this day.