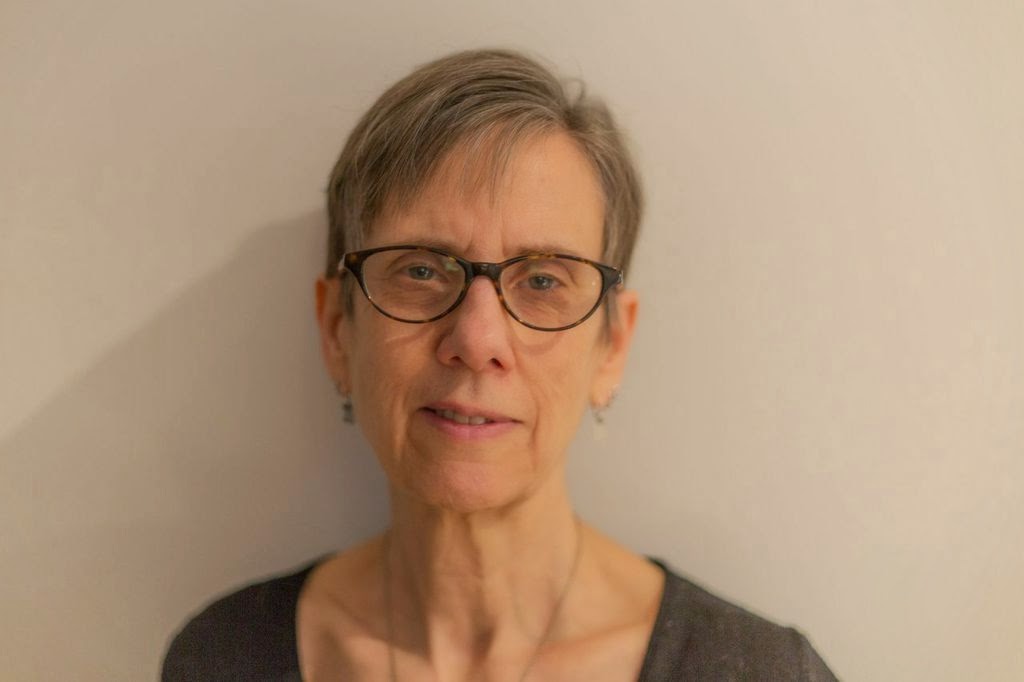 Barbara Henning is the author of three novels, seven collections of poetry and four chapbooks. Her most recent books of poetry are A Day Like Today (Negative Capability Press), A Swift Passage (Quale Press), Cities and Memory (Chax Press) and a collection of object-sonnets, My Autobiography (United Artists). She is also the editor of Looking Up Harryette Mullen and The Collected Prose of Bobbie Louise Hawkins. She lives in New York City and teaches for writers.com and Long Island University in Brooklyn, where she is Professor Emerita.

1 - How did your first book change your life? How does your most recent work compare to your previous? How does it feel different?
My first book was Smoking in the Twilight Bar.  I wrote these poems when I was living in Detroit in the late 70’s, early 80’s.  Lewis Warsh published the collection as a United Artist book.  A first book is important because it is first, and this book helped set me on my path of writing.  I started writing these poems because I had visions of my past as ghostly, almost as if past events were ongoing in the present. I could walk into a room and experience my past self as a shadow.  I wrote many of the poems about moments and places where that feeling was strong. Others were about the Cass Corridor in Detroit and a group of on-the-fringe friends. “The Twilight Bar” was a neon sign inside a club (Alvin’s Finer), a place where we used to hang out, dance, read poetry and commune. The sign came from another more local bar that had closed long ago.  That more local place was what I had in mind for the poems. The poems were narrative and somewhat surreal in overall effect.  When composing these poems I went back and forth between lined verse and prose poetry, ending finally with prose.

My new book is A Day Like Today (Negative Capability Press 2015).  These are lined poems and they were composed initially as journal entries in 2012, responding and arising from events in my life and world/national events.  There was a particular procedure used for researching and collaging text from The New York Times into the poems.  These two projects, my first book and my last book, are very different and yet both used events from my life, as part of the process.

2 - How did you come to poetry first, as opposed to, say, fiction or non-fiction?
I grew up in a household where I never witnessed my parents reading anything other than the local newspaper.  My father had a GED and my mother was the only one of nine to graduate from high school. But there were a few books in the house and my mother took my brother and me to the library every week; I developed a relationship with books and words. As an adolescent, I was a voracious reader of 19th century novels.  For some reason, even though as a child I read mostly fiction, I first became a poet. Maybe it was something as simple as praise by a teacher in high school. I loved the way words could evoke and transform mood, and I always loved Emily Dickinson’s quirky poems.

3 - How long does it take to start any particular writing project? Does your writing initially come quickly, or is it a slow process? Do first drafts appear looking close to their final shape, or does your work come out of copious notes?
I invent projects pretty quickly, but sometimes they are elaborate and last for a long time.  This last project for A DAY LIKE TODAY took three years to complete. I constantly revise and tinker and invent ways to interrupt and question my own facile thinking.

4 - Where does a poem or work of fiction usually begin for you? Are you an author of short pieces that end up combining into a larger project, or are you working on a "book" from the very beginning?
Often I begin projects in journals that culminate into a series of poems.  Sometimes there are ten poems.  Sometimes the work becomes a novel. Sometimes a collection of 100 poems (A Day Like Today).

5 - Are public readings part of or counter to your creative process? Are you the sort of writer who enjoys doing readings?
I love giving readings. They inspire me to write and revise.

6 - Do you have any theoretical concerns behind your writing? What kinds of questions are you trying to answer with your work? What do you even think the current questions are?
At one point in my career as a poet I was very interested in Jacque Lacan, Sigmund Freud and Julia Kristeva. Why was I reading them?  I felt there was some secret that they knew about life and language. Of course, I am writing to understand my life/our lives, see more clearly or less clearly or just differently. My writing is experiential and my reading is part of my experience, so ideas and categories and the language of others segue into mine.  I was very taken at another time with writing by Mikhail Bahktin; I suppose that over the years, I have become more dialogic, sometimes allowing the many voices of consciousness to speak together. Also, I’m always hoping to learn something new about myself and the world I live in, through my poetic projects.

Maybe another slogan: “Be wise. Be wary. Be wild.”

8 - Do you find the process of working with an outside editor difficult or essential (or both)?
I share my work with a couple of friends, but usually after the work is very close to being completed.  Is that essential?  No, but it can be helpful.

9 - What is the best piece of advice you've heard (not necessarily given to you directly)?
Once when I was in an art colony for the summer, a visual artist friend, Georgia Marsh, and I made a pact. We weren’t going to worry about our careers. Instead, we were simply going to live as long as we could and keep making our art.

10 - How easy has it been for you to move between genres (poetry to fiction)? What do you see as the appeal?
I have written several collections of poetry and three novels; now I am working on another novel.  It has seemed natural to go from one to the other. I like story and I like language. Sometimes the material I am gathering starts to look like story and then it becomes a novel. Other times, a poem.  In the novel Thirty Miles to Rosebud, I took earlier poems, rewrote them as prose, and then worked them into the story.

11 - What kind of writing routine do you tend to keep, or do you even have one? How does a typical day (for you) begin?
I work whenever I have time, intermittently everyday.  Usually when I am revising a work, I am also writing a new journal to work with later.   I tend to do a lot of my writing work in the evening.

12 - When your writing gets stalled, where do you turn or return for (for lack of a better word) inspiration?
My writing only gets stalled if I don’t have enough time because I have to teach too much and my rent is too high.  There are unlimited possibilities for writing.  Someone asked me last week how I can be so productive. My answer was, I spend a lot of time alone.

13 - What fragrance reminds you of home?
The smell of cigarette smoke. I grew up with two parents smoking Pall Mall cigarettes.  That smell permeated everything.   Probably the reason I now see a pulmonologist.  Well, also the smell of Old Spice in the bathroom after my father went to work.

14 - David W. McFadden once said that books come from books, but are there any other forms that influence your work, whether nature, music, science or visual art?
I have been practicing yoga for about 20 some years. Over the years, I’ve also learned to also consider writing as another type of meditative practice, something I do to understand, express and create my life, and therefore, not dependent on “inspiration.”  There is a kind of clarity of vision that also comes from meditating and practicing asana.   That also influences my writing.  Everything in my environment (including nature, music, science, visual art, books) becomes part of my consciousness and thus part of my writing.

15 - What other writers or writings are important for your work, or simply your life outside of your work?
It’s been quite wonderful to have communed and collaborated with so many poets and artists: Lewis Warsh has been very important in my life and work, as inspiration and a dear friend.  My visual artist friend and collaborator, Miranda Maher, the poets at St. Marks Poetry Project, the Belladonna women, my friends from POG in Tucson where I lived for four years, and so many others.  I’m very thankful for the writers on my shelf, on the sidewalk and in my address book.  It’s also great to have the internet and the minute-by-minute research possibilities.

16 - What would you like to do that you haven't yet done?
Finish the novel I’m now writing.  Open my writerly shoulders into urdva dhanurasana.   Live into the future for as long as I can, as gracefully as possible with my lover, children, grandchildren and friends.

17 - If you could pick any other occupation to attempt, what would it be? Or, alternately, what do you think you would have ended up doing had you not been a writer?
Maybe a musician.  I play the harmonica a little bit and I wish I could belt something out, but as of now, all I can play is “Summertime,” and even then I’m out of tune.

18 - What made you write, as opposed to doing something else?
I have a mind that’s always working.   My youthful mind needed to find a language art form so I could slow it down, figure it out and revel in the nuances between the phrases and words.

19 - What was the last great book you read? What was the last great film?
Elena Ferrante is quickly becoming one of my favorite novelists, especially her Neapolitan Series (3 books), starting with My Brilliant Friend.  The narrator tells the story of her life, growing up in Naples, with her best friend, how they try to make sense of the violent oppressive life around them, the narrator managing to slip away (somewhat) with education, while her friend becomes tangled in her childhood.  The world gets wider and wider as the narrator becomes more aware.  It’s a gripping story of a girl/woman adapting to and banging against her feminine identity and location.

The other contemporary author who I adore is Roberto Bolano.

Films – a month ago I saw Whiplash written and directed by Damien Chazelle.  It was horrifying and beautiful. One of the other films that stays in my mind from the last few years is Melancholia by Lars von Trier.  I can still see that planet spinning toward earth.