Anselm Berrigan, Something For Everybody 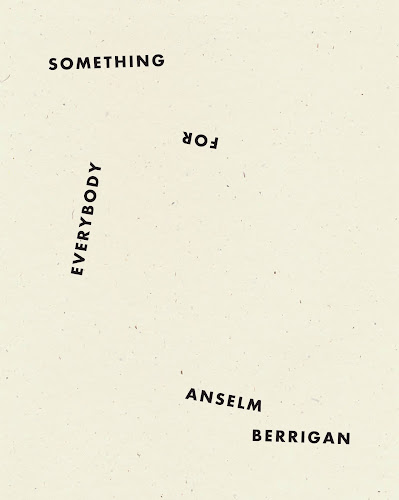 I’m behind on everything (as you know), so I’m just now getting to New York “poet, teacher, editor and occasional publisher” Anselm Berrigan’s latest, Something For Everybody (Seattle WA/New York NY: Wave Books, 2018). Comprised as an assemblage of incredibly sharp and predominantly self-contained poems, Berrigan’s is a poetic of accumulation and fragment, one formed at the apex of his collision of words and phrases. One could look no further to the opening of “ILLANELLE,” for example, that writes: “A ginger ancestor played human by takes // Her tickling shines this discarded grinning // My jumbo warp fetish threadbare on the make [.]” His is a poetic of twists and tweaks, writing a wide space and an open form that furthers a trajectory begun by earlier of the New York School of Poets (including, obviously, his parents: Ted Berrigan and Alice Notley). One can see the lineage, although there are elements of Berrigan’s poetic that could also connect to the accumulation of language employed by certain of the Kootenay School of Writing poets, namely Jeff Derksen.

The author of more than a half-dozen full-length works of poetry, Berrigan’s poems in Something For Everybody are sharp, self-aware and playful, employing a variety of structures and rhythms through his accumulations. There is an enormous amount of play here, wryly worked, from sly jokes that centre around a three-word poem, or the five poems set back-to-back that share the same title, “JIM BRODEY.” These poems are most likely composed, one might surmise, in homage for the late poet and rock music critic Jim Brodey (1942-1993) who was, as his Poetry Foundation biography offers, a “literary figure in 1960s New York City, he was friends with many experimental poets, artists, and musicians.” As the first poem for Brodey offers: “It’s getting hard to have me around too Jim / So I write you under yellow light leaning / Into some waylaid framed dimensions tearing off [.]” One might almost wonder if this is a collection that emerged organically, as poems less forming a specific book-length structure, but one of “occasions” that began to shape into a larger structure, thus the “something for everybody.” And yet, these poems are incredibly tight, without a wasted word or loose thread; to paraphrase Canadian poet Don McKay, Berrigan’s poems are “lines that any bird might trust to light upon.”