When my woman says hello
She says what can I get you.

I had no time to peruse the menu.
I was lost in thought and English

Came last, after German, French,
And Dante with no mirror page.

I decided then that to eat
Would be fine, but to decide the dish

Translation. Croatia lost to Brazil.
I went to my room to make sure

Of everything, as I often needed.
There you were absurdly, suddenly

A parrot on my knee. Your plume
Fired in the background.

To see you
So upset me

I would have learned a new language
If it meant in English to disconnect my knee.

Between two other, similar versions
Not in the same translation

I found in myself the lyric I looked for.
I found it with its moral intact.

A poet must heat to song in the dark.
Lest reckoned the poet he died to see boil.

Chicago poet Jessica Laser’s full-length poetry debut is Sergei Kuzmich from All Sides (Seattle WA: Letter Machine Editions, 2019), a title that includes but a single sentence on the back cover as copy: “There are so many ways to think of us that I have thought them all.” Composed as book-length character study, Laser utilizes twists of language, literary and historical references and some damned sharp lines to create a complex and multi-faceted exploration of character and story. She begins her collection with a narrative poem that introduces “Sergie Kuzmich,” an older writer going through a divorce (and a multitude of affairs, it would seem) who meets the much younger, emerging writer/narrator and begins a relationship. The book then opens up into what constructs itself as a study through the lyric, but one that explores both subject and unnamed narrator, exploring, as Laser suggests, her subject from all sides. “When I complete a family / We are never better,” the voice of Kuzmich responds, further on in the first section, in the poem “Sensual Delight in Virtue,” continuing: “never / Than when our enemies love us / Which is to say when we fail. / But Sergei Kuzmich from all sides / There is no treason to describe.” Laser tells a story, and tells it slant, in a way reminiscent, even, of the work of Letter Machine Editions co-editor/co-publisher Joshua Marie Wilkinson [see my review of one of his books here], even as she ends the second section, the lyric suite/sequence “Assumed Knowledge and the Knowledge Assumed from Experience,” with:

People apply
Their many logics.
They can’t all be right
And are each wrong
Two truths comprise our
O truths
Comprise our failures
And remember us. 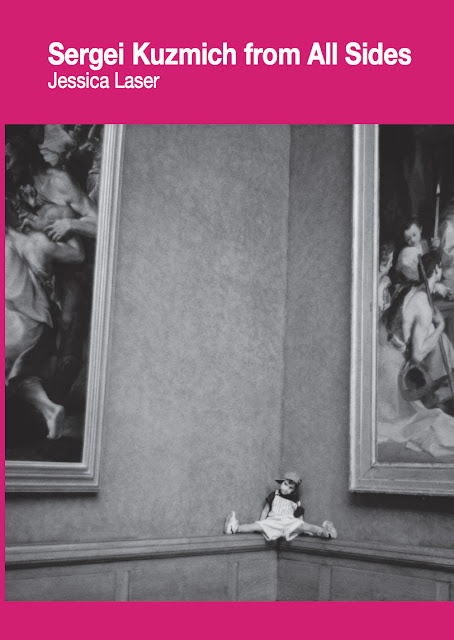 Laser moves through her subject (or subjects, really) and through her own reading, including references to numerous authors and works, something picked up in a review of the book by Allison Casey, over at Barrelhouse, writing: “Jessica Laser’s debut book Sergei Kuzmich from All Sides wields a terrible blade of knowledge—one most of us can only wield via Google. Even the title boasts a wide-cast net of experience, referencing a passage from War and Peace, and the name of an obscure Russian soldier. I know this thanks to Google, the 80 pages of Tolstoy I got through last summer, and a helpful epigraph at the beginning of the book.” Later on in her review, she adds that “Laser brings everyone from Flaubert to Nietzsche to Wittgenstein to Eliot into the fray, and ironically, it’s in a move like Eliot (or maybe more like Anne Carson) that Laser risks losing her reader among the weeds in all her influences and allusions. At what point are they more for her than for the poems?”

Throughout the book, Laser moves from reference to collage, and her final poem/section, “Losss,” is made up entirely of quoted lines/stanzas (one hundred and seventy-one of them, in fact), footnoted and properly sourced, including lines from Robert Frost, Wallace Stevens, Leo Tolstoy, Vaslav Nijinsky, W.S. Merwin, the books of Genesis and Exodus, Alice Munro, T.S. Eliot and multiple others. It is curious how Laser moves through the collection, from sourced material to her own, writing out an exploration of character which includes explorations of the self, the self in relation to others and the self in relation to God, such as in the second section, where she writes: “When I saw the man, I / Lived unbearably. I had no vision / Of myself as a mystic, / No audience with god.” In the end, this might be a book about the finding ground, or finding place, utilizing the unnamed narrator as a means-to-an-exploration, writing a poem-essay on “Sergei Kuzmich” that has nothing to do with him at all. And yet, as the song goes, writing Kuzmich in a way that the character would move through this book, and think these poems are all about him (wouldn’t he?).

What is the difference
Between now and forgetting

It could be both though (“Tractatus”)