In the center of the concrete room there is a pink plastic water basin, wobbly, full, and brimming. On its side is a faded sticker of a smiling elephant with a fat ribbon around its neck. Three boys, wearing only shorts, sweating, stand around half-daring each other to jump over the basin without breaking its water. Outside, the housemaid, faded floral duster, a scar underneath her eye, lines empty soda bottles with the tops cut off side by side along the wall to the back door. In them go soil or rocks or rainfall. She sits on a miniature chair. She is waiting for stormcloud, homecoming, miracle, or for one of the naked boys to run toward her, their open mouths full of blood and laughing. And when the bark of the dog rises from the other side, her eyes dart to the fence—to a gap from plank to plank just large enough for a dog’s head but not hers. She knows this. on the day she tried, the dog, a smudge of black and brown, flanked by wild grass, no leash, hungry, rose to its three legs and did not bark.

The first thing I noticed about Chicago poet Jan-Henry Gray’s debut, DOCUMENTS (BOA Editions, 2019), was having to tear the tops of unbroken pages near the beginning of the collection, opening immediately to D.A. Powell’s introduction, “Foreword: Documents Unsealed.” There was something appropriate about having to tear at his pages. Winner of the A. Poulin, Jr. Poetry Prize, as judged by Powell, DOCUMENTS speaks from the perspective of an author who lacks legal status in the United States, a country he moved to at the age of six, when he and his parents left the Philippines. As Powell writes in his introduction:

Rarely would I chose to begin a discussion of someone’s poetry by delving into their biography. But a concerns this particular collection, these biographical facts are the supporting architectural elements upon which the house is built. The collection is both a documentary and a documentation organized around facts and necessities, forgeries and truths. Court cases and legislative battles—and their ensuing ripples across the social fabric—pull at the substance of this book’s art. what is the difference between disclosure and admission? Between hiding and omitting? These distinctions matter fundamentally in relation to identity, a commodity that can be stolen, erased or threatened with sanctions both legal and social. 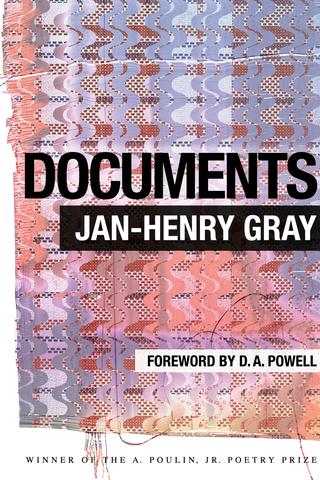 This is a striking and impressive collection, one that shifts between the prose poem and the lyric, composed both as an assortment of loss and displacement, as well as a place where displacement has become, itself, the place where one is forced to exist. An undocumented status is one I’ve not seen explored through poetry prior to this, so I’m unaware if or how much writing or by whom pre-exists on and around the subject, but Gray’s DOCUMENTS emerges, obviously, during a highly-charged period in American politics, when the conversation is both more necessary, and far more fraught. DOCUMENTS is constructed as a kind of collage, utilizing narratives of and around the undocumented in America, from the multiple numbered “Maid Poem” series, tales of migration, paperwork, escape and capture, to the poem titled “Answer No,” a four-part sequence of questions, each of which point back to other poems in the collection, including:

14. Do you plan to practice polygamy in the U.S.?
Define practice.
See “A Love Poem with a Hole in It”