Matthew Gwathmey, Our Latest in Folktales

On the outskirts, at the end of a one-way street,
a blind fiddler recreates our stroll down the aisle.
Two flower girls dance together—twirling redheads
secured by translucent strings, one to bow, one to scroll.
A pause for vows. We jig to Scottish ceilidh tunes,
the tracks we had chosen for our reception.
The program’s there on a stand in front of him,
toasts and cake-cutting about to come. Bouquet toss pencilled in.
The shopkeep, committing, ends our nuptuals with a broom;
he’s going to sweep away the petals for a new trinity—
fragrant perfumes, compact mirrors, stoles of fox fur.

Jonathan Ball’s blurb on the back cover of Matthew Gwathmey’s full-length poetry debut, Our Latest in Folktales (London ON: Brick Books, 2019), might describe such as a “mishmash,” but it seems obvious from the first poem onward that this book, consistently throughout, is occupied with time. The impression from the first half-dozen or so of these formal, first-person narratives, “Franklin the Icebreaker,” “At Arcadia Dump, Later On,” “Turning Thirty,” “Turning Thirty-Three” and “Sister Album,” suggest a gaze that is impossibly fixed on time as a multiple, gazing forward or backward, but never exclusively on the matter-at-hand. Once one makes it through further of the book, it becomes obvious that, as a unit, Gwathmey’s poems explore a progression of time—the coupling of poems such as “Turning Thirty” and “Turning Thirty-Three” to “Second Anniversary and Ninth Anniversary”—but individually seem to explore time as something that exists separately and concurrently. His sense of past, present and future exists as both weight and lightness, tether and foundation, existing in ways that are impossible to extricate from, nor would he ever wish to, if he is to remain whole. Moving from short lyrics to prose poems to slightly longer stretches of lyric sequences, Gwathmey revels in revealing that he (his narrator, etcetera) is in possession of knowledge greater than what is being presented, but also that such knowledge is woefully incomplete, writing poems that both tease and strive, revealing and furthering an impossible reach. What is it he’s reaching for?

At Arcadia Dump, Later On

We meet a shepherd amid a trail of discarded electronics, his staff assembled out of PVC pipe. Impressive, his change from a parabola of methane to a camber of mercury, summing up the whole landfille season that stretches before us. “When I started,” he says, “I had everything I needed in the cloud.” The smell of Sulphur caught in the art of natural selection—a breezy genetic drift. We watch a few beady-eyed sheep play off the dumping ground (darting noses, probing hooves against the slag-heap edge, wool newly wet). Avian swimmers dodge steam-powered waves. Country folk dressed in hazmat suits search the undershow, snoop through garbage bags. At a yelp they huddle to marvel at a crunched statistic or a shiny zippo. The siren signals the next level of hide ye mouse and seek ye cat. Soon, the falling sky will be close at hand. 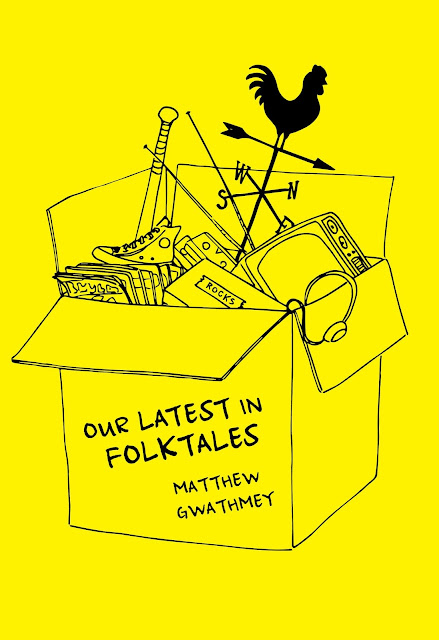 For Gwathmey, his consideration of time includes the Acadians, psych wards, fishing, video chat, ageing and the Franklin Expedition, elements and stories and tales passed through generations that exist throughout time, moving backward and forward, at times reconsidered and rewritten, whether the opening poem “Franklin the Icebreaker” writing of “Only pummellings / of gossip roam free, / wafting through stalled boats /waiting for the icebreaker.” or to the closing poem, “Les Mimes de Paris,” that offers a reconsideration of history from a small group of (presumed) youths in the Metro, writing: “In steel-toed boots, laces untied, / they depart at Invalides / to question Napoleon’s tomb / about his contribution / to the war effort.” His are poems that wish to not only pass along those stories, but add some of his own, for posterity’s sake.