Lake is big and the light on the water makes a shimmery dress on it – Give me a day all sunsents with the wide colors riding up its back, flooding the sky. Wander these streets when the sun gets high so hot wonder – if I were made of more moisture, how quickly could I evaporate? – stand still and the sky is heat lamps, and I’m willing the soles of my shoes to melt me to the blacktop. I could watch from here. The road is the halflight makes the cracks and the edges and shadows make them deeper. How is something animated in stillness?

Ten miles away from the city is water. And after? The horizon. The skin feels like it’s burning without shelter.

I drove as you slept with your forehead heat
flushed against the glass. Radio off.
Highways west found us some calm
land flattened more and became clean—
our last-minute evacuation to Dallas,
land of swimming pools, to save us. 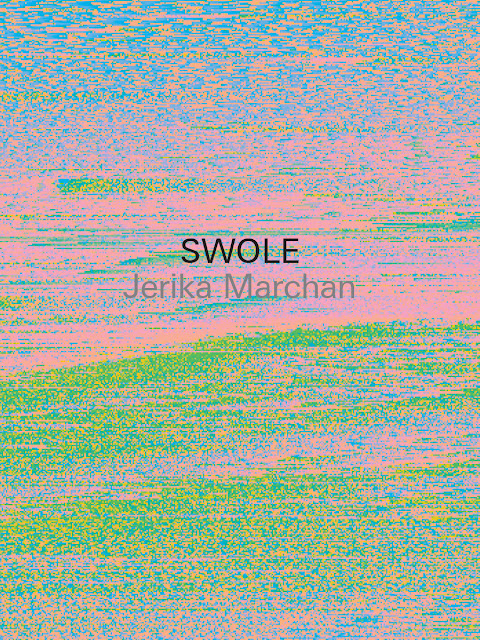 Hers is a love poem to a city and a document of the people within, during a particularly dark time in the city’s history, writing out a devastation of losses, both from without and within. “It’s the inside that knows so much / nothing & // nothing // & nothing & I repeat / myself so far ahead of me / when I catch up, it echoes.” In a recent interview on the collection for New Delta Review, conducted by Lauren Burgess, Marchan responds:

JM: This cluster of questions might resonate through my answer in ways that may veer toward the reductive, so I’m just going to pop it open a bit. I wrote SWOLE for home—and that place is there and isn’t there. New Orleans (the dream) is slipperier than this book (or any book at all) can hold. New Orleans (the place) is bigger than one voice can say, which is why it’s important to keep grasping and saying, even as we sink slowly into the ocean. New Orleans isn’t an identity to me—it’s something I try to pull close to me to understand how to be human. (Other times, she tries to swallow me instead—another way of understanding how to be human—)

As a general comment, it is fucked up to write anything about New Orleans that is devoid of black and Creole people. This place and its culture and its sound are their legacy. What we eat, what we dance to, how we treat people—that is part of their legacy and their gift to this place. Life here is saturated with this culture. You cannot unhear it. You should never try to. We could lose it one day, along with so many other things, under the heft of gentrification, political and economic instability, political and environmental destruction…

Collage, palimpsest, masking, transliteration, mondegreens, the fragment, the code switch, the erasure—these were modes that I used to organize the debris/the writing, mostly because these are the modes through which I process the world. This is how I sort through stuff. I write because I am trying to figure out where my language (the stuff that erupts out of my heart and out of my face) comes from. (I don’t feel naturally or easily coherent or articulate, in like a standard, buttoned-up way. I have to work really hard to be understood, turn myself inside out with that effort. It makes me really anxious to say that explicitly—like I’ll get kicked out of some club for not perfectly legibly articulating everything all the time.)

The book I wrote isn’t a facsimile of a single speaker that is (more or less) a thing like me. My friends, family, and neighbors are in there. I tried to write my community in there along with the specter of collective trauma, and I fully accept that the work is never finished. How could it be? There are so many gaps, so many things that aren’t addressed in part because I am so limited in my body, memory, ability, and words. I don’t try to catalog all our losses because it’s impossible. The act of saying doesn’t make the loss stop, doesn’t make the lost thing reappear as a whole thing, doesn’t plug the hole.

I grew up here. I’m still growing up here. I’m running out of space but another time, I will talk about what I’ve learned about Bulbancha, St. Malo, “broken” English, x…, x…, x…, x…