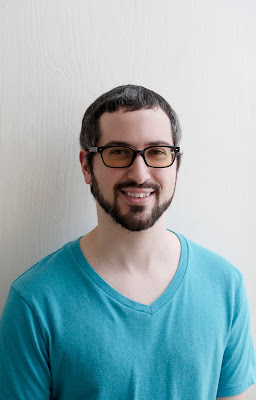 Brandon Amico is the author of Disappearing, Inc. (Gold Wake Press, 2019). He is a 2019 National Endowment for the Arts Creative Writing Fellow, the recipient of a North Carolina Arts Council Regional Artist Grant, and the winner of Southern Humanities Review’s Hoepfner Literary Award for Poetry. His poems have appeared in The Adroit Journal, Blackbird, The Cincinnati Review, Kenyon Review, New Ohio Review, and Verse Daily, among other publications.

1 - How did your first book change your life? How does your most recent work compare to your previous? How does it feel different?
Disappearing, Inc. being a real object in the world feels wild. You write and revise and submit and revise and write and so on for years and years and it seems like a book is at the top of the hill that you never stop climbing...until all of a sudden you're there and the book is a real thing. My work more recently, that I began writing after the book manuscript was finalized, has been more socially pointed. While the first book was certainly aware and interested in our cultural moment, it was more implicit/macro about a lot of those things, and I'm enjoying writing poems that zoom in a little farther.

2 - How did you come to poetry first, as opposed to, say, fiction or non-fiction?
It was through my love of music. I read everything, so was drawn to prose as well, but growing up I loved music and the lyrics that came along with them, so I started writing songs before poems. Granted, I couldn't play an instrument or sing, so it would be fairer to say I wrote lyrics to songs that don't exist, and yes, they were terrible (I was in middle school when I started this!) but I enjoyed playing with language so much when doing this that moving to poetry naturally followed. Fortunately, I've managed to get a little better at it over the years!

3 - How long does it take to start any particular writing project? Does your writing initially come quickly, or is it a slow process? Do first drafts appear looking close to their final shape, or does your work come out of copious notes?
It really depends. Sometimes poems go through endless revisions, sometimes they come out remarkably like their final form. More often than not, it's somewhere in the middle—my poems generally go through three to five rounds of revision before I'm comfortable with them heading out into the world. I could endlessly tinker and change them, as all writers could with their work, but at some point you have to put a poem down and move to the next one.

4 - Where does a poem usually begin for you? Are you an author of short pieces that end up combining into a larger project, or are you working on a "book" from the very beginning?
Poems for me usually begin with an odd image or phrase that gets caught in the netting of my mind. I get it on the page, then use that as a catalyst for the rest of the poem. Why did this image/language stick out to me, why is it resonating? I dig and dig in there and usually the poem unfolds from it. As for larger book projects, I often don't write with a book in mind, I just write the poems and see what links up and what might fit into a manuscript together—but with Disappearing, Inc., it was actually the opposite. About 75% of the final book was written with that project in mind; the book was initially a single long prose poem in numbered sections. Over time nearly all the poems morphed into verse, and they gained titles as they began to take their own shapes and identities outside of the project itself.

5 - Are public readings part of or counter to your creative process? Are you the sort of writer who enjoys doing readings?
I very much enjoy doing them! I love meeting readers and lovers of literature, and sharing with them. I wouldn't say they are part of the creative process, but they're certainly not counter to it either. I'd say readings and events are adjacent, something I enjoy a lot that's related to the work, but doesn't really change the process of creating the work for me.

6 - Do you have any theoretical concerns behind your writing? What kinds of questions are you trying to answer with your work? What do you even think the current questions are?
I think poetry is more useful to ask questions—or, perhaps more accurately, to discover what questions we should ask—that it is to answer them. I've always seen the act of writing a poem in order to answer something, to tell someone what you already know, an exercise in redundancy or, at worst, vanity. The best poems have a genuine curiosity underpinning them, the very act of writing them, and the reader is hopefully allowed to be along for the ride and to experience the same ideas and questions and contradictions as the author. For Disappearing, Inc., one of the most important questions I was searching for answers to is what happens to the self in an age of excess, of noise, and amid the constant fracturing of who we are by forces both technological and political? Did I answer that question? No, but I didn't try to. I found the question at the center of my concerns, and spent many pages digging around and exploring it.

7 – What do you see the current role of the writer being in larger culture? Does s/he even have one? What do you think the role of the writer should be?
Poetry at its core is about connection, about encouraging us to see the threads sewn under the surface, not just of the world and the culture but each other. Poetry is the opposite of simplification—if it’s doing its job, its encouraging empathy and embracing both the inability to know all and the valuing of that which we do have in our lives.

8 - Do you find the process of working with an outside editor difficult or essential (or both)?
Every artist needs outside feedback/guidance, and working with a talented editor is hugely beneficial. I don't know that I would say essential, as it's not a requirement to make good art and not everyone has the privilege of working with an editor in this capacity.

9 - What is the best piece of advice you've heard (not necessarily given to you directly)?
I took an acting class in undergrad, and though this advice was given to me in that context, I still apply it to my writing: the instructor told me, when I asked how I was going to communicate the underlying subtext of a monologue to the audience, to trust in the process to bring my understanding out in the acting. In regards to writing, I take this to mean not to belabor the point; trust your audience will follow your thought processes.

10 - What kind of writing routine do you tend to keep, or do you even have one? How does a typical day (for you) begin?
I don't have a set writing routine. I make the time to write when I can! The closest thing I have to a routine is meeting with my writer's group where we exchange poems and edits monthly.

11 - When your writing gets stalled, where do you turn or return for (for lack of a better word) inspiration?
Reading is always a nice place to go to when writing is stalled. Funny enough, I do more poetry writing when I'm in a wave of reading prose than when I'm reading verse! I think it's the sentences of prose that catch me up in their flow, get my brain thinking in sentence structure upon which I can impose lineation and new types of rhythms.

12 - What fragrance reminds you of home?
Can't say there's one in particular that transports me back there.

13 - David W. McFadden once said that books come from books, but are there any other forms that influence your work, whether nature, music, science or visual art?
Comedy—be it film or television, stand-up, late night, whatever—has always been a big influence. Humor is the means through which I process a lot of things.

14 - What other writers or writings are important for your work, or simply your life outside of your work?
I am very lucky to have a number of incredibly talented writer friends and acquaintances. For risk of leaving anyone out I won't rattle off names, but suffice to say that the talent and/or friendship of a number of writers has buoyed me along. One person I will mention is Karen Skolfield. She's a remarkably talented writer, and her friendship and her poems themselves have meant an incredible amount to me over the years.

15 - What would you like to do that you haven't yet done?
Part of me wants to teach poetry! I'm not schooled in that area, though--I have no MFA and have never taught more than a workshop here and there. But perhaps someday!

16 - If you could pick any other occupation to attempt, what would it be? Or, alternately, what do you think you would have ended up doing had you not been a writer?
When I was younger I very much wanted to be a doctor. I was even accepted into university as a pre-med student. I like to think that if I didn't fall in love with words, I would have gone down that path.

17 - What made you write, as opposed to doing something else?
I've always kind of needed this outlet, and since I have no musical talent and I can't paint, it's been something I've loved throwing myself into.

19 - What are you currently working on?
I don't have a second book project in mind yet, so close after the first one released. I'm enjoying the freedom of being able to play around in the poetic space and organically find the interests I'm drawn to in my writing.