Some things I think of as outside and inside that might be only ambient. Open an aperture onto the morning. Tinny feeling all under your skin. Autoeroticism as autodidactics. Infant-size noise-cancelling headphones. I lost all my footage when the phone crashed. The prism disrupting its own light beam. Filmed the sky out the train window again. Tell me about your secret job. The shushes of cars make clear it’s still raining. In one of several possible futures I hear you exhale from the shower. Try not to think of all the things you touch. Bells in the background. Sprung up before the light. A vocabulary of no-longer-quite-right words. The scarf smells like her for years after her death. Are you bleeding on your new leggings. New people in the lobby waiting for their movers. The second old-fashioned made me puke on the tiles. One light box to another. The prescribed situation of video projection. You practice conversation to make it perfect. Walked to the post office. About the effects of late capitalism. Sometimes facts get melodramatic. I’ll probably never see him again. kiss on the cheek I notice her teeth. Then a voice says crazy ass Brooklyn ass shit. We cunningly decorated our need to make money. Knowing in advance how the collaboration will sour. Everyone’s getting sober or divorced. No one wants another disposable tote bag. 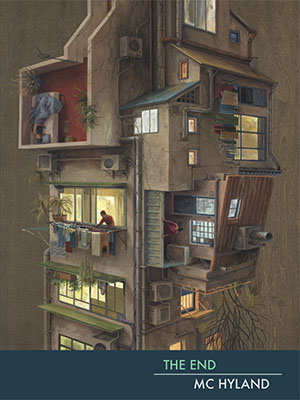 Brooklyn poet, editor and publisher MC Hyland’s second full-length poetry title is the accumulative The End (Sidebrow Books, 2019). The End is composed as an assembly of ninety single-page stand-alone prose poems each titled “The End,” all of which seem to be constructed from a collage of found material, overheard lines and other strays and threads that might cross her path. “Most of these poems contain direct quotations,” she writes, at the end of the collection, “from speech, music, texts, or films. Where a word-for-word quotation is from a reliable source, I’ve tried (though with only incomplete success) to track and name the source below.” The list she provides is extensive, and include numerous overheard lines, and phrases pilfered from movie posters, graffiti, and postcards. There is an element to her compiling that feels akin to attempting to capture a portrait of a particular time and space, even as she writes early on in the collection: “This is a kind of timekeeping.” And the beauty of her form is that it could be potentially endless, and include anything and everything.

As I’ve written prior, this sequence of poems with the same title is reminiscent of works by Noah Eli Gordon, including his collection The Source (New York NY: Futurepoem Books, 2011) [see my review of such here] and more recent Is That the Sound of a Piano Coming from Several Houses Down? (New York NY: Solid Objects, 2018) [see my review of such here]. Hyland’s chapbook The End: Part One (Magic Helicopter Press, 2017), which I wrote of here, included a small handful of poems from the manuscript, as well as the occasional “response,” each seemingly written by a small handful of other poets, an element not included in this final collection. “Finally, I should add that these poems often deal with conversation not only as a source of nourishment,” she writes at the back of the Magic Helicopter title, “but also of (to borrow Sianne Ngai’s book title) ‘ugly feelings.’” Further in the notes at the end of the chapbook, Hyland writes: “While these poems started as an attempt to find a form through which to think about all the challenges of living in New York and starting a PhD after a long break from both the East Coast and this kind of reading-intensive academic setting, they ultimately ended up taking me in a different direction: an attempt to think about the role of feeling in forming and re-forming an aesthetic and political consciousness.”

While The End: Part One wove her epistolary prose poems with the lyric essay, attempting a call-and-response with her reading, her environment and her friends, The End allows the work, in a certain way, to speak more for itself, without the response or the editorializing. I would argue neither form is better or more effective than the other, but simply a difference in approach; given The End sits at ninety prose poems, perhaps the call-and-response element simply isn’t required.