Stephanie Strickland, How the Universe is Made: Poems New & Selected 1985-2019


REAL LIFE IS WHITE IN CONNECTICUT

iris in the garden
charts and charters
sea-bitten shore 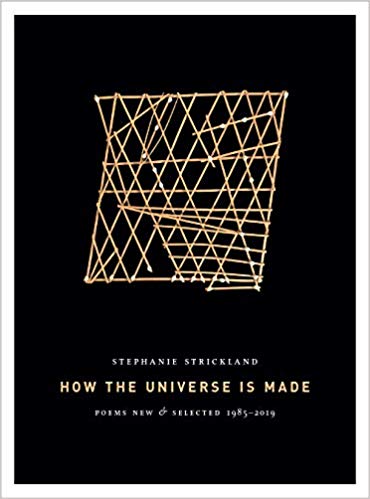 Part of what is interesting about Strickland’s work—long been known as a blend of physics, math and myth—is in how her scope is ever-expanding, broadening beyond printed text into sound, image and multimedia, evolving from a work purely existing as the more traditional lyric into something multi-genre and almost multi-lingual, utilizing written language against a language of visuals and into digital practice. Strickland’s ongoing work expands not just how the universe, as she suggests, is seen, but is (the present tense being used very deliberately) actually created. Hers is a poetry of knowledge informing knowledge, and one of science, mythology and the lyric interacting to seek and even create connections. In a 2018 interview for Touch the Donkey, she responds: “Many poets who write from/about/with science want to affect scientists. Others want to affect public perception. I share with Buckminster Fuller an urgent sense that new lexicon and syntax are required. First of all, because language based on ancient physics—the sun rises, the sun sets—does not convey, much less entrain, our current understandings of mathematics, measurement, or instrumentation. The second reason to re-create a lexicon is to make clear how a powerfully imposed science understanding directly affects social justice and all else.” As one of her earlier poems, “CASTING OF BELLS GIVES WAY TO CASTING OF CANNON,” begins:

Poles of knowing: Bell and Endor; one, a theorem,
one, a Witch of.

Saul and Macbeth, who both seek power beyond
what’s possible, seek it through knowledge—a cult knowledge

retained in one Weird woman (after the countryside has been cleared
of women, who fly, who flew, who chatter