Are you coming by to the ottawa small press fair on June 22nd? And/or the pre-fair reading the night prior? I mean: we’ve only been doing this twice a year since 1994. Why haven’t you made your way over to this? I mean, really. Honestly. What gives.

Toronto ON: Edited by Ali Blythe and produced by The League of Canadian Poets is THIRTEEN: New Collected Poems from LGBTQI2S Writers in Canada (April, 2019). Given the plethora of publishing ventures through the League over the years (I discovered the work of Jane Eaton Hamilton through Going Santa Fe, Hamilton’s chapbook produced through the League in 1997 as winner of their then-annual chapbook manuscript contest) I would be curious to know if anyone has compiled a bibliography of the scattering of publications they’ve produced over the years, from occasional books to chapbook, postcard and/or pamphlet series. THIRTEEN includes work by (obviously) thirteen Canadian poets currently producing work: John Barton, Karin Cope, Tanis Franco, Keith Garebian, Kayla Geitzler, Matthew Heinz, Rachel Lallouz, Chloe Lewis, Nisa Malli, Trish Salah, Jane Shi, Matthew Stepanic and John Emil Vincent.

Dizzy hopes for ginseng
To be sent

Nonce hopeful
A chant for it

Her or over
Or there

When you turn on me
Rose naïve

Styles of tremble
I want it 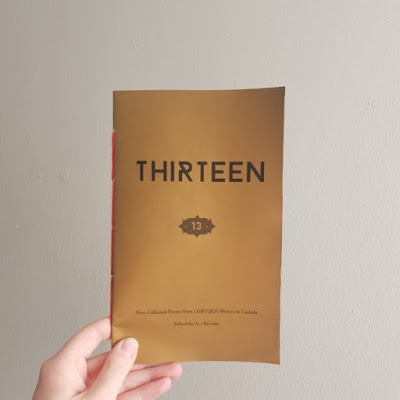 I’m aware of only a third of the authors in this short mix, so am pleased to be introduced to the work of a number of the other contributors. This collection is an impressive overview of some of the writers currently working in the country, and the purpose of THIRTEEN, then, seems to not only provide, but to acknowledge space, as Blythe writes in the introduction:

I know it has taken decades of the heart’s muscle to build these spaces we can gather, and quite a few more to invite others in to listen. I know good authors who have had to keep hammering on the doors of granting bodies, publishing house, festivals. Then took up positions as doormen to let others through. Then built their own spaces with their own doors.

In my former capacity as editor for a youth literary magazine, in about half the submissions I could tell the young writers were exploring in their writing their gender and sexuality. It’s no necessary for people to have a place to do this in art, especially when it can be so hard to do so in the real world.

America (geography otherwise unknown): I’m very taken with the remarkably-crafted rawness of Ithica, New York poet,editor and publisher Marty Cain’s chapbook Four Essays (Tammy Journal, 2019), an assemblage of four interconnected lyric essays on craft, male sexuality and desire, sexual violence and trauma, all of which bleed the boundaries between the lyric essay and the prose poem in powerful ways, such as in this excerpt from the final of the quartet, which could also be used as a descriptor for the collection:

For the remainder of his life, Wordsworth revised the Prelude. He mediated the adolescent rawness; he made the edges eloquent, the poem more like a formal container for a feeling. Originally, he’d intended for it to be the first part of an epic trilogy, one whose length surpassed Paradise Lost.

But he failed. That motherfucker died.

And form is a feeling.

And form is a garment. (“Wordsworth Poem”) 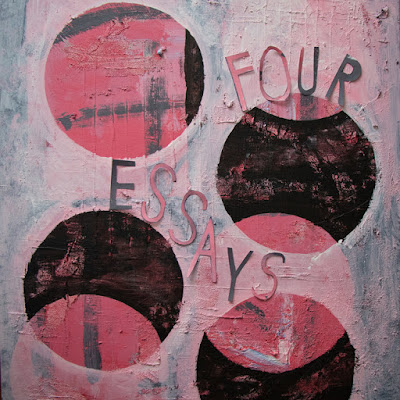 In four essays—“Prologue,” “Robert Penn Warren Poem,” “Kids of The Black Hole, Part II” and “Wordsworth Poem”—Cain explores writing craft through and around elements of personal memoir, attempting to reconcile a number of experiences, including the revelation of his father’s sexuality, and a possible sexual attack by a drunken colleage that he might easily have buried away from his conscious memory (I like, also, that an essay titled “Prologue” is both prior to the collection and part of the collection, the first of the four). There is some dark and complicated material Cain moves through, but he does so in such an open and thoughtful way, and one can only hope that the trauma of these experiences is lessened through the process of writing, thinking and publishing. These are very smart pieces, and I can only hope that this chapbook is but a prelude to an eventual full-length collection, whether with or without these four essays.

I remember a time when we were in a car in rural South Carolina. My brother began seizing in the backseat, then his words ceased to signify, they began to garble and turn like an ocean or the simulated sound of an ocean in a shell you hold to your ear, your own blood / a circular river, I remember his eyes as he spoke, I remember seeing his eyes speak, they said, Listen, I don’t know what it is I’m saying.

They said, There is something true in what I’m saying.

Then he didn’t speak. Then his eyes shifted to one side, his mouth like a garage with nothing in it. Then trickling saliva, neck limp and hanging. I remember my mom saying something. I remember the car speeding up and a force pushed me back, we ran through red lights. I don’t remember whether I was scared.

I remember a time. (“Prologue”)