The latest from Brooklyn poet, editor and publisher Anna Gurton-Wachter is the chapbook Spring Bomb (dancing girl press, 2019), the most recent of a list of chapbooks she’s published over the past few years, including CYRUS (Portable Press @ Yo Yo Labs, 2014), Blank Blank Blues (Horse Less Press, 2016), The Abundance Chamber Works Alone (Essay Press, 2017) and MOTHER OF ALL (above/ground press, 2018). As well, she is author of the forthcoming full-length debut, Utopia Pipe Dream Memory (Brooklyn NY: Ugly Duckling Presse, 2019). From what I’m aware of her work, Gurton-Wachter favours the self-contained project, composing chapbook-length suites around particular themes, ideas or structures, all of which have quite a different flavour and purpose, something that I am interested in see translated into her forthcoming first-length collection. In certain ways, her work is comparable to west coast poet Hailey Higdon, who recently released a first collection after years-worth of multiple, self-contained chapbook-length projects [see my review of her full-length collection here]. The prose poem stretches of Gurton-Wachter’s MOTHER OF ALL, for example, is quite different from the poems in Spring Bomb: a sequence of untitled poems built out of collected accumulated phrases parsing a rather nebulous through-line. As she writes in her “Note on Spring Bomb,” which opens the collection:

I start to write poems built on my attraction to the aesthetics of chance, performing the chance operation of staring at interviews with artists until the visual field of the interview becomes blurry, expansive yet isolated: I select and rearrange disparate words that stand out to me. Is this chance? Sometimes instead of using a word I saw on the page, I use a word I thought I saw on the page that isn’t there. My vision is purposefully blurred. I am interested in the fact that I approach artist interviews this way, at first thinking of the artist’s words as an extension of their artwork, to be viewed visually, map-like, then thinking, no, I am negating the artist speaking. I do not want to really take in what they are saying. I treat their description, the written conversation, as something to look past rather than at. I do this perhaps because in this realm I will only allow for myself to be the singular artist present. No other artists exist, they all pass through me.

I approach the artist interview as a moment to ventriloquize because I feel at a loss of how to describe myself or my own writing when put to the task. All art making is to varying degrees ineffable. I can’t speak so please show me how to string words together that describe what we are doing here. I like this because it honors my various approaches to not knowing and the authenticity of egoism’s stupidity.

Still another thought I had about why I was doing this was that I was following my attraction to distillation and abstraction. Somehow, one still experiences the artist and their intentions even when their language has been distorted, broken apart, de-contextualized.

It’s strange, right now I can picture this note about the poems flowering, growing, until the poems I wrote are tiny and the note is enormous, like a book that is all footnotes, like a book whose author has vulnerability on display and enjoys decoration more than substance. 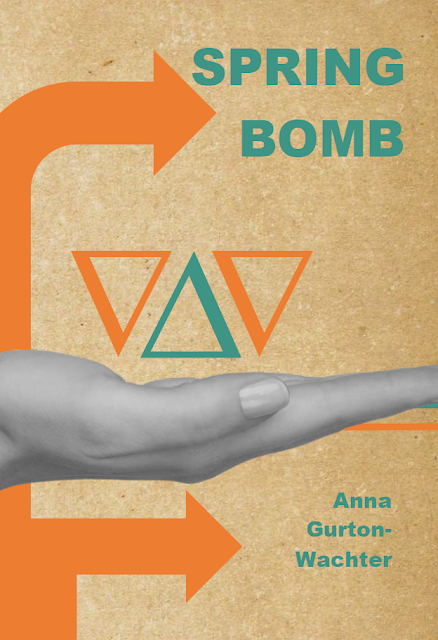 I’m a huge admirer, generally, of Gurton-Wachter’s work, and find it curious how her project of accumulation and chance is similar to her DoubleCross Press co-editor/publisher MC Hyland’s recent second full-length title, The End [see my review of such here], but with an entirely different shape and result. Perhaps a chicken-or-egg question of whether they are friends and collaborators due to shared sensibilities, or if there is an influence that runs between them, yet both will approach an idea from an entirely different perspective. There is something akin to both collage and erasure to these texts, selecting certain phrases and abandoning others. Where Hyland’s collection collects seemingly from every and all possibility, collating into the shape of prose poems that speak to “The End,” Gurton-Wachter’s Spring Bomb lifts from a series of deliberately-selected texts, shaping, collecting and reshaping into short poems composed in a sequence of short lines and lyric bursts. Both seek to capture and articulate their immediate through overheard and borrowed phrases, but speak to something far different; something less pessimistic, perhaps, playing a binary of anxiety and optimism, as she writes: