alien hardship of the plains rapturous

mnemonic her profile joy and absolution

After going through Guy Birchard’s Only Seemly (St. John’s NL: Pedlar Press, 2018) [see my review of such here], I was curious to go through some of his other work, and he was kind enough to send along a copy of Hecatomb (Brooklyn NY: Pressed Wafer, 2017), a collection of one hundred poems, numbered in reverse order. The “hecatomb” is said to come from Ancient Greece or Rome, and refers to a great public sacrifice, originally of a hundred oxen (“heca” = one hundred), suggesting that Hecatomb is composed as a sequence of losses or sacrifices, but one that moves through a sequence of tales from his own history and life, sacrifices as both to atone for, and those he had to work through, to get to where he has ended up.

Sacrifice is hard to know how
to make. Quiet defeats me
though I keep it. I rave. Nothing

so unseemly as an aging guy’s
anger, what once was his
glory and chance.

What becomes interesting is, in part, the stories that the poems suggest, infer and tell, however indirectly, for a poet who seems to put all into the work, and less so into biography, as the biography at the back of the collection includes: “After gleaning the poems themselves, what’s left of Birchard’s biography might better remain the preserve of honest privacy. Anne Heeney and he remain an item after forty-some years, which we mention as salute to her tenacious artistry. Senior’s Home address: Small Provincial Capital of Dreadful Night. A lay poet.” As with Only Seemly, as well, the poems in Hetacomb are equally evasive, slipping easily between direct memoir and abstract, writing poems that explore less a straight line than the points along it, allowing the reader to complete those connections. Given the nature of some of these stories, the poems feel less like losses or sacrifices, per se, than simply lessons he’s learned (or finally learned) over the years, despite the mantra of “Hecatomb thirty-six,” that includes:

Motive, theme: sine qua non. Only then dare start,
Falter, start over. Anticipating no conclusion. A hundred amends.
More. Deletion. Dilation. Heeding the sumptuary. In the end,
Doubt. Repeat. Ignoring exegetical itch. Exhaust the doubts.
Specious challenge, diction; structure, bona fide. (Or v. v.)
Such the frailty of the laity. Poetry is simply a taste and a practice.
Bespoke speech that stays spoke. No expatiation. Ecstatic.
“Consolation and exultation over imbecility, vanity, cupidity.” 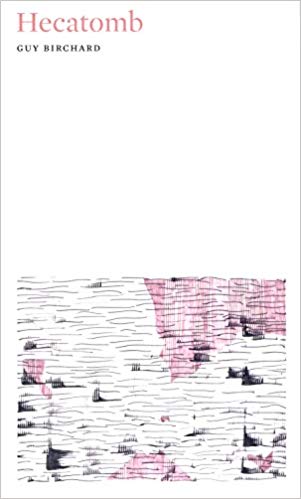 What first caught my eye in this collection was “Hecatomb ninety-one,” a poem that speaks to his attachment to Ottawa literary history, including the former Pestelozzi College on Rideau Street and Commoners’ Press, both of which were run as communal and community enterprises [see my interview here with Neil Flowers on the anthology Northern Comfort, which was published by Commoners’ during the same period]. There are some fascinating stories and connections throughout this collection, from his Ottawa days (a reference to the Britannia Yacht Club) to travelling around New York, Bismark and Saskatchewan, as well as Vancouver stories, each of which suggest far much more. Given there is remarkably little information I can gather on him or his work online, but for entries upon the existence of his books, elements of his biography do exist as a thread through his poems, somehow concurrently less and more than other poets.

Display of frisky eagerness and artless
ineptitude in boyish abandon.
(Risky
maneuver, for novice littérateur, true,
cack-handed, at that.)

Who decently returned holograph p.c. (prized)
with thanks for “First
Sighs,”
and also advised,
Disguise as typical scene…