Honked out of said creek the prettiest punkinseed sunfish through the eye. Not twice.

Hit the wasp nest with a flaky hucked rock from halfway up the block, and booked!

Alfalfa?—gun shot? High summer, BILLIE HOLIDAY (alluring name) DIES. Some old writer with a beard blows his own head off, which, judging by 72-point bold, especially seems to grab the grown-ups. Sugar Kane, nude in her bed, she towards whom we’ve just warmed. Comes Death for Rascal Jazz.

Victoria, British Columbia-based poet Guy Birchard’s latest poetry title is Only Seemly (St. John’s NL: Pedlar Press, 2018). A poet who self-describes in his bio as living “below the radar, perfectly disaffiliated,” Birchard  is the author of multiple collections going back four decades, including Baby Grand (Ilderton ON: Brick Books / Nairn, 1979), Neckeverse (Newcastle upon Tyne: Galloping Dog Press,1989), Birchard’s Garage (Durham UK: Pig Press, 1991), Twenty Grand (Boston MA: Pressed Wafer, 2003), Further than the Blood (Pressed Wafer, 2010), Hecatomb (Brooklyn NY: Pressed Wafer, 2017) and Aggregate: retrospective (Bristol UK: Shearsman Books, 2018). Birchard’s work emerges from a particular element of lyric collage, both text and visual, and this collection is both a narrative lyric memoir and a combination of both accumulation and collage, as fragments and clipped sentences accumulate and pivot against each other, furthering a line even while breaking that same line as much as might be possible. The book, Only Seemly, also, is made up of a single long-poem, constructed as a sequence of stand-alone prose poems, and yet, underneath the title “hypnogagia,” which makes for an intriguing structure: a book with one title made up of a single poem with another title?

Said goodbye to great friend. Years later, heard he changed his name. Name which I went and forgot. Across the country, the Goners giggled. I couldn’t make it, distracted by a death. Decade after, newly blown into an unlikely town, stepped that morning past entertainers still duded up in Canadio-Western-Swing show-duds stowing gear into a van outside a hotel. Over coffee in the next block, killing time perusing yesterday’s folk festival program I wasn’t at, there’s Ray’s mug fronting that band! New name, “Condo,” un coup de mémoire. Must’ve missed each other on the sidewalk by fifteen years and a minute. Seasons roll by High & Wild. One time a mutual acquaintance bore greetings between us miles apart. Next year, my friend, he passed. 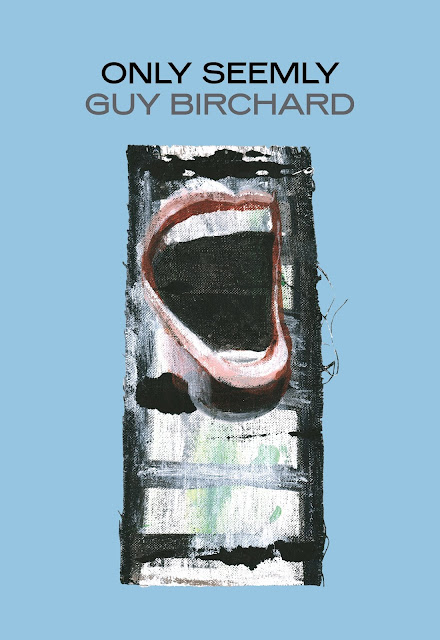 While this might be the first title of Birchard’s I’ve properly explored, his is a name I’ve known for some time (most likely through jwcurry’s ongoing publications), and yet, skirting just under a particular kind of literary radar, despite the length of his publishing history. Every so often a book might appear, but little information otherwise, but for the acknowledgment in his author biography that he exists under the radar, and a different geographic location (an earlier author bio had him living in the prairies, for example). What I am noticing, also, is that many of those that do tend to reference his work are running under the radar themselves (such as this reference to Birchard’s work in this Touch the Donkey interview with Pete Smith, for example). He becomes fascinating, in part, due to the difficulty with which one might locate him. In a review of Baby Grand originally published in The Literary Storefront Newsletter (No. XX), January 1980 (discovered via the Brick Books website), one of the very few mentions I could gather of Birchard online, Colin Browne wrote: “Reading Birchard is like walking into a fence corner of juicy, tantalizing brambles and pushing deeper because you prefer to taste the blood the thorns tap. Birchard collages archaic usage with movie slang in the most amazing ways; his humour is dark and humid, his eye never glazed.”

Mounted on Moose Jaw Pathologist’s dining room wall, bleached skull of the honoured husky who saved him from freezing to death that time he lost only toes. At a Sons of Lucullus do there we ate the most piquant pronghorn roast served up by its shooter who would be killed playing baseball come summer.

Thank you for introducing me to Guy Birchard's poetry. It's incredible. Another example of a quiet, outside the establishment writer who carries on with their genius, loving what they are doing all on their own. More hidden gems please!