The artist jumps on stage to celebrate his achievements,
takes a moment to honour his grandfather and reads
an accented story about the Weetigo, a gaunt monster
with a greedy appetite – the gaping mouth of residential school
sucking the marrow from his grandfather’s bones,
slurping his blood, exposed brain, and body and spirit
digested and regurgitated for the rest of his days. But
good times are in his words too.

He says they continue to carry him. Can they? What is swept
into the wind returns. I picture him and the old man in a half-
ton bouncing down a dusty reserve road stopping at landmarks,
half-rememebered naming. Niiwak stories of family and
community in the language of a time when the earth was young
like a boy on his grandfather’s knee, hands clasped together
on the steering wheel. Bad medicine, maci-maskihkiy
passed on, unnoticed, pulsing red.

I was quite taken with a reading Armand Garnet Ruffo did in Ottawa recently, as part of the VERSeFest launch of Rob Taylor’s What the Poets Are Doing: Canadian Poets in Conversation (Gibsons BC: Nightwood Editions, 2018) [see my review of such here]. Ruffo read a few poems from his brand-new full-length collection, Treaty # (Hamilton ON: Wolsak and Wynn, 2019), a book in which “Ruffo documents his observations on life – and in the process, his own life – as he sets out to restructure relationships and address obligations nation to nation, human to human, human to nature. In these poems Ruffo has built powerful connections to his predecessors, and discovered new ways to bear witness and build a place for them, and for all of us.” As he writes as part of the notes at the end of the collection:

Although this book covers many things, some only tangentially related to the treaties, it was the treaties that sealed the fate for Indigenous peoples and much of what has happened to Indigenous since can be traced directly back to them. One thing is abundantly clear: what was said and what was done were two entirely different things, and the results have been nothing less than catastrophic for Indigenous people. This is something I’ve thought about for a while, and it was on my mind when I wrote the much anthologized “Poem for Duncan Campbell Scott” back in the early ‘90s. 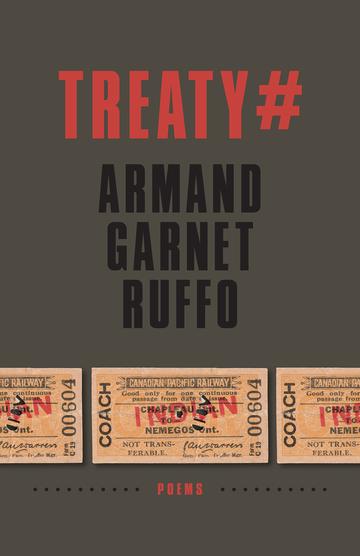 Over the years, through writing out Indigenous themes, histories and contemporary realities, Ruffo’s work has evolved from what he termed a “protest” literature [he describes it thusly in a 2015 interview I did with him for Jacket2] into a literature of presence. Through Ruffo’s work, it would be hard to dismiss Indigenous experience and perspectives as being both historic and contemporary, existing here far longer than the rest of us have been in North America. Literature by Indigeous writers has evolved enormously across North America over the past twenty years, and, through numerous books as both writer and editor over that time (including his seminal Grey Owl: The Mystery of Archie Belaney, which was subsequently adapted into a feature film), Ruffo has emerged to become one of the most established Indigenous poets in the country (some others on that list that have been around for a while might include Marilyn Dumont, David Groulx and Annharte, among others). The poems in Treaty # write out personal histories and travel, travelogues and traplines, treaties, Pauline Johnson and missing women, to stories from his youth and his own relationships to other writers and their work. “Everything changes except my love,” he writes, to open the poem “At Père-Lachaise,” “writes Apollinaire.” There is an intimacy Ruffo engages, whatever his subject, writing out narratives that explore the world from his own experiences, knowledge and perspectives. As part of his conversation with Liz Howard in Taylor’s What the Poets Are Doing, Ruffo responds:

All of this makes me wonder about the responsibility and the role of poets, Indigenous poets in particular. Can we as literary artists do our own thing above all else or are we compelled by our histories and reality as colonized peoples? To paraphrase Laguna Pueblo writer Paula Gunn Allen, there’s no cavalry riding over the hill to come to our rescue, to be spokespeople for our communities. The living and the dead. To put this another way, are we writing for the children who were beaten and starved to death in the residential schools? I’m thinking here of the tiny graves hidden in the bush near the old St. John’s Residential School in Chapleau. Is writing as artists with no responsibility but to ourselves and our art a luxury we can afford?