Nikki Reimer, My Heart Is a Rose Manhattan

Calgary poet Nikki Reimer’s third full-length collection is My Heart Is a Rose Manhattan (Vancouver BC: Talonbooks, 2019), following [sic] (Calgary AB: Frontenac House, 2010) [see my review of such here] and DOWNVERSE (Talonbooks, 2014) [see my review of such here] and chapbooks fist things first (Windsor ON: Wrinkle Press, 2009) and that stays news (Vancouver BC: Nomados Literary Publishers, 2011). Much in the way of her previous collection, My Heart Is a Rose Manhattan is a book of absurdities and responses, whether to Alberta politics, the ongoing housing crises, capitalism, the patriarchy, poverty and literary politics, or social media, exhaustion, rage, bewilderment and grief. As she writes to open the poem “Dear Craigslist,”: “Knock it the fuck off with your stale tributaries, your overdrawn affluenza [.]” In an interview I conduced with her for Jacket2 in 2015, she responded:

My compositional process first and foremost is an attempt to process a bewildering array of “content,” and second, it attempts to uncover value systems that are embedded in discourse. As writer I am seeking some kind of catharsis, or impossible resolution. 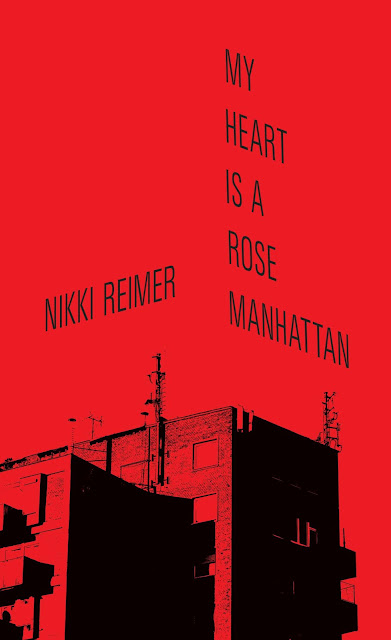 Grief, in personal and political ways, is the foundation upon which this book sits, running the length and breadth of the collection. Both poems and author openly grieve, and work to explore that grief, and the implications such an ongoing grief will have upon the body, the family and culture: “i might suggest that grief has made my family embarrassing and ridiculous / but we were always already embarrassing and ridiculous / grief has metastasized our individual personality flaws and our family-culture flaws / my family is a cancer  cancer is the normcoriest of diseases / because it’s been pinkified and commodified” (“Our sorrow is normative”). In language twists and turns, Reimer’s poems rage and kick, concurrently firing back, standing firm and admitting defeat. Her poems alternate between lyric, collage and pointilism, narrating a series of sweeping attempts to figure out exactly what the hell is going on, and, even, how to stop it. As the poem “Kenya’s greatest elephant” begins: “Dandelions are delicious? / Peter MacKay explains lack of a special guest appearance. // Last photo was a teenager I appreciate our elephants. / You are the platform.” These poems kick the world bloody, and the world more than deserves it. As a fragment of the longer sequence “Our sorrow is normative” reads:

once, in Toronto in my twenties, i read a menstrual poem
the fifty-something dude who’d been flirting with me said
“men don’t like to hear” such topics
he was the husband of the sister of the man who used to helm English CBC
(a man whose Prada coat I’d hung in the Regional Director’s office
on more than one occasion)
he probably did not go into debt for his fancy shoes
i played exaggerated-dumb-uptalk bitch
“They don’t like to hear about cats?”
because
fuck him

Posted by rob mclennan at 8:31 AM
Labels: Nikki Reimer, Talonbooks