EVERYTHING I KNOW
ABOUT BLACKNESS I LEARNED
FROM DONALD TRUMP

“Frederick Douglass is an example of somebody who’s done an
amazing job and is being recognized more and more, I notice.”
– Donald Trump 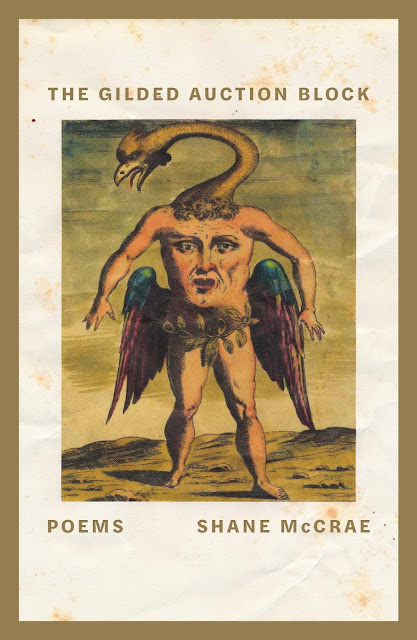 In the powerfully-lyric The Gilded Auction Block (New York NY: Farrar, Straus and Giroux, 2019), his sixth full-length poetry title, New York City poet Shane McCrae directly responds to an America represented by and irrevocably altered by President Donald J. Trump. The Gilded Auction Block furthers the concerns presented in his previous collection, In the Language of My Captor (Middletown CT: Wesleyan University Press, 2017) [see my review of such here], which is, admittedly, the only other of his work I’ve seen (something I have to correct at some point, obviously). From what I am aware, McCrae’s work confronts head-on the repercussions and continued effects of America itself, from slavery and subjugation, colonialism and systematic oppressions that have become foundational throughout much of the European settlement of North America, and within the very myth of The United States of America: the hypocrisy of a colonial oppressor repeatedly flag-waving freedom and oppression (I’m not letting Canada off the hook here, by the by, but that isn’t what McCrae’s book is about). For McCrae’s The Gilded Auction Block, the “contemplation of American racial history” (as Henry Louis Gates Jr. referred to McCrae’s work) is there as the underlying structure, but the propulsion of the collection is entirely on and around the current American President, from what racist and ignorant cultural forces allowed him into that position, to his own words and actions, which become difficult to satirize, simply for how ridiculous (and inherently dangerous) he is, and has become. “America you’re what a turnout great / Crowd a great crowd big,” he writes, to open the poem “THE PRESIDENT VISITS THE STORM”: “smiles America / The hurricane is everywhere   but here an / Important man is talking here   Ameri- / ca the important president is talking [.]”

Posted by rob mclennan at 8:31 AM
Labels: Farrar Straus and Giroux, Shane McCrae