she’s writing this in 1974
this woman is a lesbian be careful
this lesbian, separate from men

so it’s a big deal when she leaves him
on the bridge when she writes
as I have left so many of my lovers
that he should be counted among them
in 1974, Judy Grahn knows who the enemy is

who her lovers are
and the wind

could blow them all over the edge (“Pet Sounds”)

The latest title by Oakland, California poet and editor Stephanie Young is Pet Sounds (New York NY: Nightboat Books, 2019), an accumulated sequence set in three increasingly long poems: “CONGENITAL,” “AVE │ VIA” and “PET SOUNDS.” Riffing off the infamous 1966 album title by The Beach Boys, the bulk of Young’s Pet Sounds is made up of the title poem, as the first two poems are but two and seven pages each, respectively, making it seem as though the first two pieces exist as a kind of warm-up into the main event. Weaving across and through fragments, threads and short scenes, Pet Sounds rolls, sweeps and riffs on love and coming out, lovers and exes, animal captivity and a variety of names (from basketball players Steph Curry and Andre Iguodala to poets and activists Pat Parker and Judy Grahn to Troilus and Cressida), as well as criticism both general and specific on music. Really, Young’s poems, at least throughout this collection, are very much engaged in both music and sentences, moving out of one love, and one sense of self, entirely into another. At the end of “AVE │ VIA,” for example, she plays off the lyrics of a particular song by the Talking Heads, writing:

a prairie, or a swamp
after the money’s gone

wholly lost and gone
since missed the right way

into the blue again 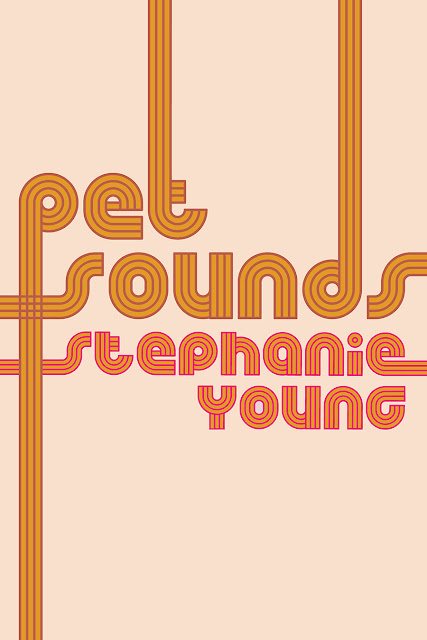 Change can be terrifying, and this entire collection articulates and shapes an evolution, both allowing and realizing a series of shifts in awareness, politics and sexuality. “I can’t tell what’s going on there,” she writes, deep into the title poem, “in the song, I mean // you remind me how it ends / lovers come and go // yes but did his one true love leave? is she dead? / or with him, and all the others // left, or died / flown away // it feels very true / to the feeling // regardless / either way [.]” In a short note on the collection’s second poem (where you can see the whole of “AVE │ VIA” online, also) for The Poetry Society of America, Young wrote:

The first version of “Ave | Via” included an epigraph from Jenny Holzer and a lot of sentences. The sentences were about foreclosure, development, student debt, and adjunct labor. About feeling unable to write poetry; about living in a neighborhood I could no longer afford. And yet I did live there, had for a long time, even as rent rose around us like water. I felt like a zombie. I felt like the epigraph I later removed, a line from poet Wislawa Szymborska as projected by Holzer: So you’re here? Still dizzy from another dodge? Close shave, reprieve? One hole in the net and you slipped through? I wrote about turning, in a kind of despair, towards Caroline Bergvall’s poem “Via,” constructed from the first three lines of Dante’s Inferno as translated into English forty-seven times by forty-seven different translators.

Which is to say that “Ave | Via” is the absolute opposite of Athena emerging fully formed from the head of Zeus, it's more like going back into his head (already split open by someone else) in order to retrieve something you forgot, or forgot how to do, so that you can think about uneven forms of life in the neighborhood. A little bit diving into the wreck, a little bit Orpheus. I love the sound of Bergvall’s poem, the circular condition of waking up again and again lost, and listened to her reading it on repeat. At some point I typed up “Via” and dumped the language into a spreadsheet, a familiar form of self soothing. Then sorted it alphabetically. I was looking for patterns which were of course all around me, old, and violent.

Writing this poem brought me back to music again, as halting and rough as it felt. And then music became central to Pet Sounds, the long poem that followed, eventually forming a book this poem is part of. So too the refrain: what is it we even wanted in the woods / a little house?