And the road was all
Of bones

And all and only I
Was on it

Walking to where at noon forever

A voice
Far and thinly

Filling up
The canyons the boxes

Of its meanings
I say was

What I mean is
Will be

Southern California poet, translator and editor Chad Sweeney’s sixth full-length poetry title LITTLE MILLION DOORS: AN ELEGY (New York NY: Nightboat Books, 2019), a book-length lyric poem stripped down to the bone. LITTLE MILLION DOORS: AN ELEGY surrounds the death of the author’s father, and what follows, utilizing the process of grief and writing as a way to potentially rebuild. The effect of Sweeney’s lines are striking, composing phrases that end before they finish, accumulating as a kind of staccato or lyric pointillism, one made out of moments to cohere into something larger, but only once enough of the poem has presented itself. As the book/poem writes, mid-volume: “What is it to live / Is to want to live [.]” 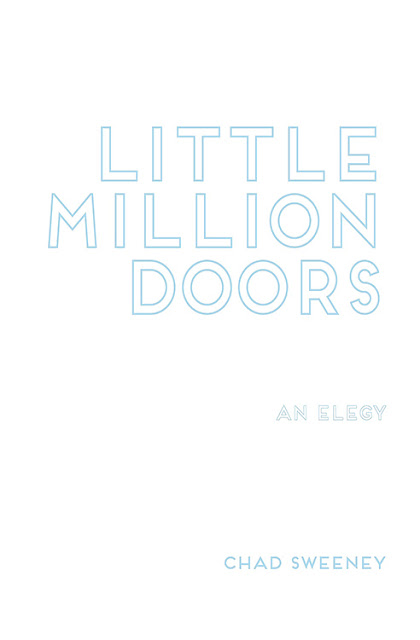 What becomes quite compelling is in how his individual lines connect to and disconnect from each other, tethering meanings that ripple further, even break, at the succeeding line. Meaning becomes, if not fluid, but something that shimmers, concurrently in multiple, and even contradictory directions. There is something radiant that emerges from his lines, from this poem, as it bobs and weaves, continuing further down a path both casual and incredibly precise. LITTLE MILLION DOORS: AN ELEGY is a poem grand in scale, composed to the smallest and most immediate moments of grief, thinking and memory.

Into us a little while
Light lets nothing is

Sovereign a page a box
Brimming

All delicate
In the body held

In the coarse
Rope netting

Of the body time keeps

Does it want in us each
Carries her

Married in the soft sleep

Of marrow I can’t explain
Children see me

Inside them I watch
Language move the year