A MOUNTAIN’S JOB IS
TO JUT

It’s true, I did get fired
from the globe factory.
I put a beach in N.D.
and us on it but then
I put us in the waves
in a bed on the waviness.
It’s best to just put things
where you think you
want them. When I think
of mountains I think
of beer, and how clean
everything can be.
When I think of buoys
I think of the darkness.
but also I think of seals.
An island is the wrong
symbol for loneliness.
I never wanted two cats.
Now I have nothing
in cats.

I’ve been hearing Zachary Schomburg’s name for a while now, reading a poem here and there in a journal or an anthology, but his latest, Pulver Maar: Poems 2014-2018 (Black Ocean, 2019) is the first full-length collection I’ve had the opportunity to go through. The author of the poetry collections The Man Suit (2007), Scary, No Scary (2009), Fjords Vol. 1 (2012) and The Book of Joshua (2014)—all published by Black Ocean—as well as the novel Mammother (Featherproof Books, 2017), Portland, Oregon writer Schomburg’s Pulver Maar: Poems 2014-2018 is an assemblage of multiple sequences, sections and suites of lyrics, accumulated phrases, lyric fragments and prose poems, sitting at more than two hundred pages in total length. Alternating, sometimes at strobe-light quickness, between darkness and light, the press release informs that these are poems that “are playful but not all play; they carry a humanity and an acute awareness of what it is to try to make a life, whether you’re a mountain or dust or just a human.” And then, in the author’s own description of the collection: “[This] is a collection of poems written between 2014 and 2018. Some of the poems are long, and some of them are short.” There is something utterly fascinating in the way Schomburg builds his poems, composed as first-person narratives with layers of surrealism, absurdism, narrative storytelling and theory. These are poems that evoke, twist and loop into and around expectation until there is nothing left but where the poem has set you, there, down. As the fourth poem in the fifty numbered poem sequence “OARS” reads:

I don’t know where I am.
Maybe on the ground in Australia.
Something’s poison tongue licks my eyelash.
I stare back at it with one eye.
It grows even.
I touch a beating in a throat.
A nod hello? 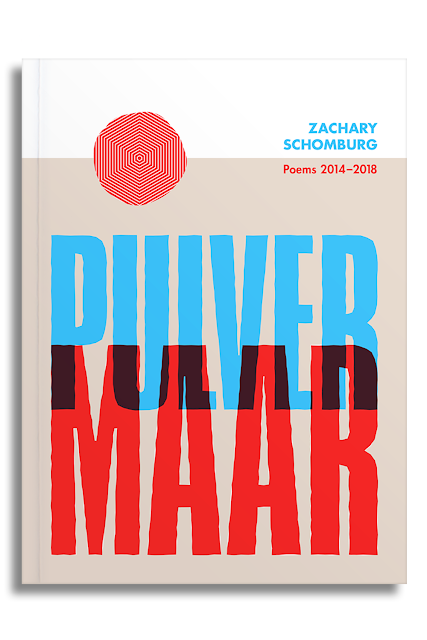 There is heft to this collection, and there are times I’m reminded of the surrealism of Canadian poet Stuart Ross through these poems, and at other times, especially through the section “THE FUTURE / THE BABY”—a suite of poems that hold either the title “THE FUTURE” or “THE BABY”—Boulder, Colorado poet Noah Eli Gordon (both for structure, and for the fact that he often employs this kind of multiple-poem sharing a title format [see my review of his most recent book here]). Each poem in the suite exists almost as a portrait of the moment where something turns, and in the last direction you might have expected. And sometimes the unexpected turn is in the realization we were going in an altogether different direction all along. His collisions, putting one thought or idea against another, are casual, calm and incredibly striking, and often illuminating through just how unsettling and unexpected they are. As he writes in one of the poems titled “THE FUTURE”: “I say I have something / I’m about to say.” As partof a 2018 interview posted at Neon Pajamas, Schomburg speaks to poetry, and the process of putting a manuscript, and then a final book, together:

Part of poem writing for me is to know, upon returning to poems after a while, which need water, which need trimming, which need polish, which need to be buried, and which need to be left alone. Most just need to be buried or left alone. But a books of poems isn't just made of poems—it's made of paper, and design, and artwork. Thinking about how the book is born from the poems into a thing is a really fun part of the process, and something that I get to do with other people. Writing the poems is solo work, but the rest of it comes alive in collaboration. For each Black Ocean book, with Janaka Stucky's blessing, I've been able to collaborate with my long time friend, Dennis Schmickle. Dennis has designed all of my Black Ocean books, and a few Octopus Books too. That process is a rewarding one, and one that takes on nearly as much importance for me as the poems. Often, through design, the poems will change to fit some concept within the design. The poetry can bend to the intention of the book as an object too. I'll change them to fit the page, so to speak, or to fit within the tone of the book that D is creating. The poetry may feel dated to me personally, eventually, but the book never feels dated. The book will bury us.