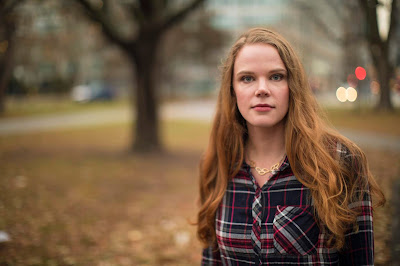 Originally from northern California, Laura Cok spent time in Grand Rapids, Michigan and Waterloo, Ontario before settling in Toronto, where she now lives. She holds an MA in English Literature from the University of Toronto, where she won the E.J. Pratt Poetry Medal and the University of Toronto  Magazine alumni poetry contest. She has been previously published widely across Canada and works in corporate communications. Doubter's Hymnal is her first book.

1 - How did your first book change your life? How does your most recent work compare to your previous? How does it feel different?
This (Doubter's Hymnal) is my first book, so it remains to be seen! I work tangentially in the book industry for my day job, so I know enough to avoid the magical thinking that a published book will provide me with unambiguous professional fulfillment, but I do feel more legitimized as a writer/part of the literary community than when I was published scattershot in journals.

I think my more recent work has simplified a bit in terms of language -- I guess that's a typical younger-writer pitfall, the tendency to be a bit florid. I'm just as interested in form, and less interested in being combative.

2 - How did you come to poetry first, as opposed to, say, fiction or non-fiction?
I do write some fiction and non-fiction, but poetry always came more naturally. I wrote a poem at about age seven, something to do with the stars. I showed it to my mom, who complimented it and then gently explained the concept of linebreaks. My dad had a number of wide-ranging poetry collections I would steal and bookmark heavily. So I come from a well-read family, but I'm not sure why it was poetry specifically that grabbed my interest.

3 - How long does it take to start any particular writing project? Does your writing initially come quickly, or is it a slow process? Do first drafts appear looking close to their final shape, or does your work come out of copious notes?
It's a long period of procrastination and avoidance, and then the actual writing comes fairly quickly. I'm trying to be better about heavier editing, but my first drafts and final drafts tend to be pretty close. No notes, except for random lines on my Notes app from the middle of the night.

4 - Where does a poem usually begin for you? Are you an author of short pieces that end up combining into a larger project, or are you working on a "book" from the very beginning?
Usually it's a line or a phrase that has popped into my head, or a topic that's been obsessing me for no discernible reason. I did not at all have the book in mind from the beginning; it was only a few years ago that I realized I was close to having enough poems for a manuscript, and when I started putting them together it was clear that there were a few major themes.

5 - Are public readings part of or counter to your creative process? Are you the sort of writer who enjoys doing readings?
I've only done a small handful of readings, most recently the Emerging Writers series in Toronto. I do not enjoy it, but I'm hoping that with practice it'll get easier! So they're not part of my creative process, but because my poems tend to be fairly narrative or linear, they do lend themselves well to being read out loud.

6 - Do you have any theoretical concerns behind your writing? What kinds of questions are you trying to answer with your work? What do you even think the current questions are?
Not especially. I approach writing poetry as "trying to work something out," almost like a puzzle. I think the dominant question is "how do we go on, given what we know [global warming, violence, the inevitable death of loved ones]?"

7 – What do you see the current role of the writer being in larger culture? Does s/he even have one? What do you think the role of the writer should be?
I'm wary of elevating The Writer to mythic status; we're all just muddling along, trying to do the best with our interests and talents that we can, and maybe offering a new perspective or shining a light on something unknown.

8 - Do you find the process of working with an outside editor difficult or essential (or both)?
Essential! My day job is in corporate communications, so I am editing and being edited all the time, which takes the sting out of it. I've had the chance to work with the editors of a few literary magazines (thinking particularly of CV2: Poetry Lives), which is a rare opportunity given all the demands on editors' time, but every time it's been so remarkable what a difference fresh eyes make.

9 - What is the best piece of advice you've heard (not necessarily given to you directly)?
The most comforting advice is from Ira Glass, about dissatisfaction between what you intended your work to be versus what it actually turns out like on the page: "It is only by going through a volume of work that you will close that gap, and your work will be as good as your ambitions...It’s normal to take awhile. You’ve just gotta fight your way through."

10 - What kind of writing routine do you tend to keep, or do you even have one? How does a typical day (for you) begin?
My day usually begins with an enthusiastic greeting from my dog, Penny. I work 9-5, and as much as I would love to be the kind of writer who gets up at 5 to carve out her creative time, I am not. So I usually work in very small pieces in the evening and on weekends. Dreaming of writers' retreats, but I'm often less productive when I have unstructured time. I would not have made a very good starving artist.

11 - When your writing gets stalled, where do you turn or return for (for lack of a better word) inspiration?
Other poets! I read a lot of poetry (thank you, Toronto Library), and that's usually enough to jump the cables.

12 - What fragrance reminds you of home?
Eucalyptus trees. I grew up in northern California and we had one in our front yard.

13 - David W. McFadden once said that books come from books, but are there any other forms that influence your work, whether nature, music, science or visual art?
Well, I've got a science poem in my book, inspired by physics. I've tried to write ekphrastic poetry but haven't had a lot of success yet, because my poem is always worse than the art.

14 - What other writers or writings are important for your work, or simply your life outside of your work?
Emily Dickinson was the first poet I really loved, followed shortly by Sylvia Plath and Anne Sexton. Later I came to Sharon Olds and Lorna Crozier.

15 - What would you like to do that you haven't yet done?
Finishing a book was the dream for so long that it's hard to say! Writing the second one, I guess.

16 - If you could pick any other occupation to attempt, what would it be? Or, alternately, what do you think you would have ended up doing had you not been a writer?
As a kid I meant to be a doctor, and I retain my interest in the medical field to a certain extent (there's also a medical poem in the book).

17 - What made you write, as opposed to doing something else?
Well, I'm not any good at visual art. I had a lot of encouragement from my English teachers, and just enough bits of success along the way to keep me submitting. But I wouldn't have stopped writing either way.

Posted by rob mclennan at 8:31 AM
Labels: 12 or 20 questions, Laura Cok, Mansfield Press