Social Poesis: The Poetry of Rachel Zolf, selected with an introduction by Heather Milne


Trapped in this high-performance culture, let’s suspend,
all disbelief, ignore the elephants in the room.

Our abstractions stink of pure gibberish and no one
notices the false pundits.

Look through the mirror, it’s the information Age, where
every surface is 1793 brilliant urine requests scum wolf,
and nothing shines. (“Human Resources”)

The past few days I’ve been going through Social Poesis: The Poetry of Rachel Zolf, selected with an introduction by Heather Milne (Waterloo ON: Wilfrid Laurier University Press, 2019), the latest title in the expansive Laurier Poetry Series of critical selecteds. Editor Heather Milne assembled the collection Social Poesis by selecting from Canadian expat poet Rachel Zolf’s five trade poetry collections—Her absence, this wanderer (Ottawa ON: BuschekBooks, 1999), Masque (Toronto ON: The Mercury Press, 2004), Human Resources (Toronto ON: Coach House Books, 2007), Neighbour Procedure (Coach House Books, 2010) and Janey’s Arcadia (Coach House Books, 2014)—as well as from her online digital poetic project The Tolerance Project (http://thetoleranceproject.blogspot.com). I’ve long been fascinated by Zolf’s project-based work, something that has become more overt as she continues to publish, utilized to examine human interaction, and a variety of social and cultural histories. The book-length Human Resources, for example, was a magnificent examination of human interaction and dislocation through the corporate language; a language, it would seem, deliberately constructed to dehumanize. Zolf might utilize external means to produce work, but her concerns are deeply human, from the intimate to the professional to the historical, and the dark elements that so often are deliberately set aside, as Milne writes as part of her “Introduction” to the collection:

In one of the poems in Human Resources, Zolf cites fellow Canadian poet Anne Carson, who asks, in relation to Paul Celan’s severely redacted poetry, “What is lost when words are wasted? And where is the human store to which such goods are gathered?” Zolf responds to Carson’s question with a question of her own: “When you ‘cleanse words and salvage what is cleansed,’ so you collect what’s been scrubbed off or what remains?” In other words, do you salvage the grime that has been removed, or do you valorize the beautiful language that has been scrubbed immaculately clean?” 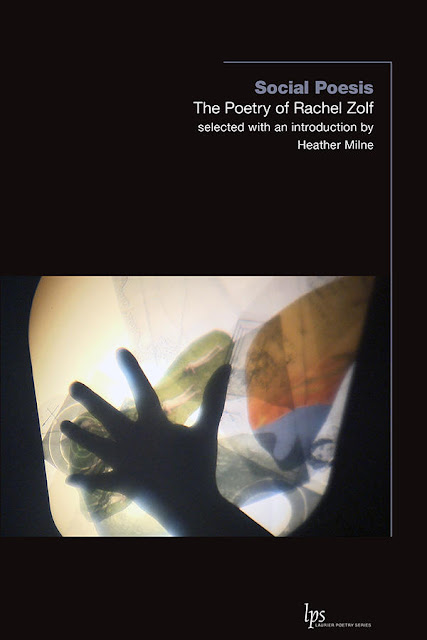 What is helpful in this collection is the sequence of notes presented at the opening of sections that provide some context to the book/project being excerpted, such as the note on Masque that informs that “Zolf has compared this book to a play in which multiple characters are trying to talk at the same time, creating a polyphonic series of poems.” to the note on Janey’s Arcadia, that opens with: “Zolf makes use of optical character recognition software (OCR) that scans PDFs of archival texts into Word documents. OCR often misreads words and inserts strange symbols and characters into the text. Rather than correct these errors, Zolf embraces them as part of her compositional strategy. The glitches disrupt the poems that make them difficult to read, but they also become a site where meaning is generated.” This book exists as both an impressive overview of Zolf’s ongoing work, and a wonderful introduction to what she’s accomplished so far, much of which, I would argue, hasn’t received the attention it so clearly deserves. As Zolf herself writes, to close her “Afterword”:

One wag famously suggested that “philosophy ought really to be written only as a poetic composition,” and I’ll wag back that the writer of any composition ought to take responsibility for the stance they are writing from and how what they write relates to the world they live in. I am a white-skinned, middle-class, Canadian, secular Jewish, genderqueer lesbian poet and thinker and educator and lover and abuse survivor and also sax player and other identities as well. I am here (like and not like Abraham) cloaked in ambivalence. Do these words matter when forty-nine mostly Latinx and black queer and trans people are massacred in Orlando while they dance? There is the so-called constative and the so-called performative. There is testimony and there are four chimneys blown beyond knowledge to deformed freedom. There is author, vendor, rhetor … all witness and sometimes survivor. There is a poem and there is un essai, a try, a poethical wager. A traviler is made. There is a monster in the neighbour’s face. That alien traumatic kernel of Das Ding in the Nebenmensch adjoins and hystericizes me as the both/and that exceeds and opens thought. yes and no are unsplit neighbours housed in abrasive proximity in the poem. Du liest is you read and you glean. There is a thinking encrypted in silence and a thinking encrusted in noise. There is a listening to what is unsayable. There is blur when I try to see one thing. There is a reach, a touch, impress. There is a limit and a limit and a limit and, peut-être, a threshold, break. As the impure products of America go crazy, there is un éveil, a queerly errant arousal. There is a veil, (im)ovable. No One arrives to witness and adjust. There is an experience that cannot be translated. No One can drive the car. There is an experience that cannot be undone. I am undone. There is a time that could have been then and a time that will have been now and a time always already to come. These coincide. We are what we gain from this disorientation.