Tonight just opened its door. Your stranger steps in with a head of worries: saying, I have no feeling in my hands, my face. The last brother, the moon’s ditch. We sketched the map out together with red tea. I held my hand open for him to practice the lines on.

Sorry I know you less than the ice does.

Mr. Matta-Clark, dawn sniffs through an oval, mooring the joists. Which are the tools for chronicling what you sawed through? Drywall in an elbow crease, scraped free with sink water.

A hole smeared into the boathouse floor. I startle the gull-laden ocean into beams. 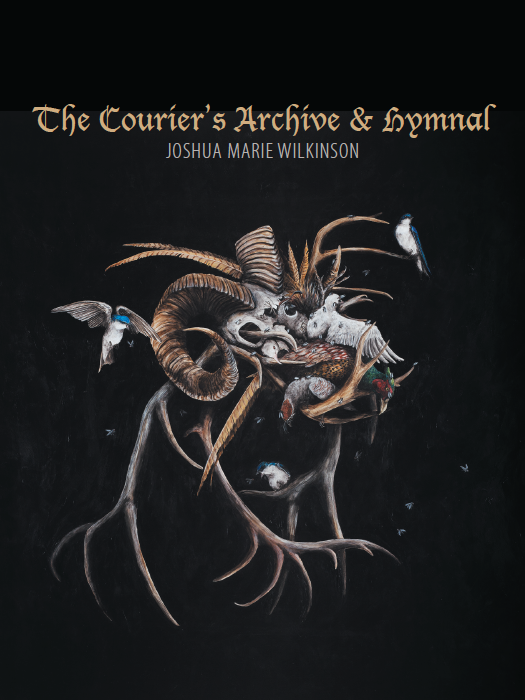 I’m curious about the construction of Tuscon, Arizona poet and filmmaker Joshua Marie Wilkinson’s No Volta pentalogy, the third of which is newly out: The Courier’s Archive & hymnal (Portland OR/San Francisco CA: Sidebrow Books, 2014). Each of the three books in the project so far—the first two being Selenography (Sidebrow Books, 2010) and Swamp Isthmus (Boston MA/New York NY/Chicago IL: Black Ocean, 2013)—are constructed out of an accumulation of sections, each in turn constructed out of a sequence of untitled fragments. One begins to wonder: is the structure of the book unit deliberate, or perhaps more of an arbitrary one? It’s as though his projected pentalogy might simply a matter of breaking down a far larger project into publishable units than specifically worked out of five individual works: might the entire project of accumulated sections eventually appear, even a decade or two down the road, as a single publication, perhaps some five hundred pages in size? It’s an interesting question, certainly. The Courier’s Archive & hymnal is made up of four poem-sections: “Day for Night for Night,” “In the Trade of Alive Letters Mis-sent,” “The Dogs” and “fortnight’s Insignia.” What has always attracted me to Wilkinson’s poetry is in the disparate narratives that are suggested through a hodgepodge of phrases, sentences and sections that somehow mesh together into something that bonds into a much larger, layered structure.

She repeats egress & ingress over the lobby scuffle.

The bellhop’s wrist was bandaged with napkins.

The elevator goes up for a long time before returning with nobody.

A ridge of pollen drawn clean into the vent. Trail of gumdrops shows our courier where went a friend.

The bats follow you to the tavern & wait outside on your bicycle until the tenth inning.

In his “Or: A Hollow Little Nimbus of Grime: How I Made Certain of My Poems,” composed for the “Why Write?” series for Green Mountains Review (posted June 22, 2013), Wilkinson speaks of his recent compositional and thought processes, writing that “I don’t see writing as expressing something that’s already inside me. Instead, maybe it’s to find words for what’s unworkable and thereby feel out the textures of that gap.” In order, he sketches out a bit of the structure of the individual No Volta books:

In my book Selenography, I tried to see how far I could strip a lyric poem back to minimal elements, but still retain character and setting and get glimpses of story churning hard. Tim Rutili’s beautiful polaroids helped me to locate the world of the poem, but also gave me a set of metonyms away from which I could push and they helped me to build up the tension of resistance, of counterpoint, of dissonance.

I cut it all up into strips, laid it out over my big table, and rearranged the scraps with Tim’s pictures. It probably didn’t look much like writing; it might’ve looked more like collaging or watching or arranging or just waiting. With coffee and music on, mumbling and pacing around it, learning the texture of its speech, getting to know its ghosts.

I love a kind of broken, alive syntax. I love grammar haunted with multiple levels of speech, whose context leaves us uncertain but whose force seems immediate. I love it when the dead speak, and I love talking right back to them, with them. Maybe a poem is a conjuring. And if it’s any good, it frightens us through recognition or just awe. I like it when a poem has the residue of other lives, other failings, other mysteries and plumbed encounters from without.

The prose sentence—and the prose fragment as well—were the units of composition in The Courier’s Archive & Hymnal. I wanted to see if I could write in the shadow of Basho’s Narrow Road to the Deep Interior (as many before me have done), but to deploy this skeining, gothic, overly descriptive syntax. I missed punctuation (Swamp Isthmus left it behind), so I brought that back, too.

I think I was hoping to overhear these long kinds of uttered sentences and questions, descriptions and tales. There are endless setting details throughout Courier’s that just confound me, but I get drawn in to the overblown half-world it unfolds, while the messenger girl threads the landscapes, making her deliveries. So, that book begins with a morphing of Diogenes’s “I have come to debase the coinage” and sort of takes it from there into the weird woods, through Jean Epstein’s Le Tempestaire, and back out of the pre-apocalyptic Chicago, Ankara, and Trabzon of my dream life.

Given his pre-pentalogy works—Suspension of a Secret in Abandoned Rooms (Portland, OR: Pinball Publishing, 2005), Lug Your Careless Body out of the Careful Dusk (Iowa City IO: University of Iowa Press, 2006) and The Book of Whispering in the Projection Booth (North Adams, MA: Tupelo Press, 2009), as well as the collaborative Figures for a Darkroom Voice (Saxtons River, VT: Tarpaulin Sky Press, 2007) with Noah Eli Gordon and artwork by Noah Saterstrom—it would appear that this larger project works at a conscious exploration of dismantling lyric meaning and narrative into a kind of amorphous, non-linear collage. Throughout his work, Wilkinson has been immersed in the possibilities of the extended lyric poem, the fragment and a deeply evocative and descriptive collage, and the No Volta project, on the whole, seems to be his attempts to take all of these ideas further, breaking down the possibilities of what the fragment can achieve, even within a structure that can’t help but be held in a linear narrative.

But in the moments of composition, it feels more like a physical need: to talk through the written words, to speak them aloud, to hear it quaver awkwardly in the voice, to scribble them out with a ballpoint pen. To inscribe and cross out; to converse and wonder; to find a name for something resistant to language; to connect and slash; to make up and lie and alter; and to sing an awkward song with a pen in your hand, muttering it out, pretending you know who you are while you’re saying what you’re finding words for, while what’s eluding you is also resurfacing new.

He then goes on to write of the two final books in the project:

The break for me was with a book called Meadow Slasher. I’d begun to write through what I would have otherwise arrived at later, from a more comfortable or safer distance. I needed another compositional practice to steady me, even to locate me, because I was coming apart after a really hard break up. I wrote the bulk of that book in a couple of days, and then worked and reworked it between Chicago, Seattle, and San Francisco. I charted a spectrum of feeling previously unavailable to me in my writing life, namely: shame, dread, rage, perplexity, humiliation, and loss—but also vindictiveness and taunting invective juxtaposing playfulness and exuberance, right alongside curiosity and unknowing—and so on.

Not that I knew it then. It just came out in the voices of stark interrogatives. Andrew Marvell’s extraordinary Mower Poems helped guide me (lines from each of them appear throughout), and I obsessed over the violence in Leadbelly’s own life versus the beauty and playful gravity of his songs. (Catullus helped also.) Meadow Slasher marked a chasm between what I’d written before it.

So, with Shimoda’s Tavern, the final book in the pentalogy, the question was, how do you come home when all your compositional practices have been obliterated? When he arrived in Tucson, shortly after I did, I kept asking my friend, the poet Brandon Shimoda, how should it end? And he’d say this way or that way or out to the ocean or into the belly of the mountain, and so on; so, No Volta just ends in his tavern instead. Which seemed like a fine enough place to close out a long poem.

I’m more and more skeptical of what’s gettable and knowable and broadly accessible. And I’m increasingly moved by what eludes and enchants and frustrates and divulges itself differently, in unseen methods and flashes. A poem’s singularity and its otherness remain intact. Like any piece of art, a poem that moves us retains its inassimilability.

To construct these five titles as a single project (as opposed to simply allowing them to exist on their own as part of a trajectory of individual titles) suggests a break from what he has previously produced in his other works, and provide some incredible moments and connections. Even in his own words, the No Volta project is very much about him tearing apart, disassembling and reassembling how he constructs the poetic line, and not only honing his own craft, but altering it irrevocably. This certainly allows him a variety of freedoms, but leads to the question of his post-No Volta works: just what will he do once this project is finally complete?